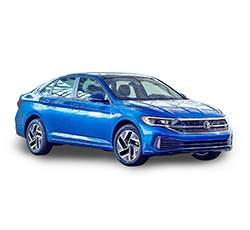 What 2022 Volkswagen Jetta Trim Should You Buy? What is the Difference Between Trims?

One of America's longest running sedan models is the Volkswagen Jetta, having made its debut all the way back in 1980. So far, it has survived the onslaught of SUVs that have come to dominate the market. In 2019, Volkswagen released the current generation - the Jetta's seventh - and has made a few minor changes since then.

Truth be told, the Jetta is a mixed bag, and that holds true on the 2022 line-up. 2021 saw the inclusion of a better infotainment system on the SEL trim level and above, as well as a few other minor nips and tucks. And there isn't much else to marvel at this model year. The Jetta falls short of where other remaining sedans shine. Both the Mazda 3 and Honda Civic offer sportier performances than the Jetta, and the Jetta quite frankly just does not stand out in a segment that is still pretty densely packed with strong competitors.

The good things are thus: a smooth ride quality and an abundance of small item storage spaces placed throughout the cabin. But those are really the only areas where the Jetta comes off as being slightly better than average. Fuel economy is subpar (getting up to an EPA estimated 34 miles per gallon in combined driving but, realistically, only coming in at about 30 mpg combined), and the engine will straight-up run out of juice if you try to push it to full throttle. It takes a sluggish 8.4 seconds for the Jetta to get up to 60 miles per hour, which means that trying to merge and pass on the highway is going to feel like a chore.

With shorter than average warranty coverage on the powertrain and an overall middling value, the Jetta might not appeal to everyone. But, if it is indeed the sedan you want to buy, there are some choices you will have to think about. Which trim level is going to work the best for you? The 2022 Volkswagen Jetta line-up consists of the base S, the SE, R-Line, SEL, and SEL Premium trim levels. Each trim level is powered by the same turbocharged 1.4-L four-cylinder engine, which puts forth a power output of 147 horsepower and 184 lb-ft of torque. This power gets directed to the front wheels, and all-wheel drive is not available. The S and R-Line trim levels are equipped with a standard six-speed manual transmission, but the rest get an eight-speed automatic.

Let's take a closer look at the different features that come on each of the Jetta's five trim levels. That way, you can go into your decision knowing exactly what you are buying and what you will be getting for your money.

Compare the S vs SE Trims. What is the difference?

The base Jetta S trim level and SE both look a lot alike from the outside. These two trim levels ride atop 16-inch black alloy wheels. Automatic headlights are standard and come with the Coming/Leaving Home feature. These trims also have LED headlights with LED Daytime Running Lights (DRLs), LED license plate lighting, and LED taillights. The S is equipped with power-operated side mirrors, but on the SE, they come with a built-in heating function. Also, the SE adds front windshield wipers that can sense rain.

Inside, you will spot some differences between the S and SE. While the S comes with a standard 6-way manually adjustable driver's seat, the SE makes it power-adjustable. Also, in the SE, a center armrest gets added to the 60/40-split folding rear seat. The SE also upgrades you to the Climatronic dual-zone automatic climate control instead of just standard heating and air conditioning. The SE swaps out the S's cloth upholstery in favor of more fashionable V-Tex leatherette seating surfaces. Cruise control comes on both trims, but in the SE, you get front seats with adjustable lumbar support for added comfort. Those front seats also have a heating function. A leatherette-wrapped, multi-functional steering wheel comes on the SE, and you will also see contrast stitching on the sport bolstered comfort front seats.

As far as driver aids go, the S doesn't have much that comes standard. You will have to add the Driver Assistance Package, which comes standard on the SE trim level. This package gives the Jetta a blind-spot monitoring system, forward collision warning with autonomous emergency braking, and heated and power-operated side mirrors. An anti-lock braking system, electronic brake pressure distribution, and hydraulic brake assist are standard safety features. You also get anti-slip regulation, electronic stability control, engine brake assist, an electronic lock differential, an intelligent crash response system, a rear view camera system, and a tire pressure monitoring system.

As far as technology goes, the S starts you off with features like App Connect, Bluetooth connectivity, and a 6.5-inch composition color touchscreen display with a built-in sound system and AM/FM radio. There is an electronic parking brake, a premium multifunction display, USB-C ports, and Volkswagen Car Net. The SE adds keyless entry with a push button start.

Compare the SE vs R-Line. What is the difference?

Going up to the mid-tier R-Line gets you a few more niceties. For starters, you get upgraded to 17-inch alloy wheels, black painted side mirror caps, and a low-speed corner-illuminating feature on the fog lights.

Inside, you do get downgraded back to some of the S's features, including the 6-way manually adjustable driver's seat. While you do not get any power lumbar control up front, the seats do retain the SE's heating function. You also get upgraded to a leather-wrapped multi-functional steering wheel. Also, if you get the Cold Weather Package, the Jetta will come with heated rear outboard seats, windshield washer nozzles that are heated, a washer fluid level indicator, and the leather-wrapped steering wheel.

Also, bear in mind that the R-Line has the 6-speed manual transmission. This means it is additionally equipped with the XDS Cross Differential System with a VAQ limited-slip differential lock. Tech-wise, the R-Line is about the same as the SE trim level.

Compare the R-Line vs SEL Trims. What is the difference?

Going up another trim level is the SEL. On the SEL, you get 17-inch metallic alloy wheels to ride around on. You don't get the special fog lights or black painted side mirror caps that come on the R-Line though. The contents of the Cold Weather package become standard, and the LED projector headlights with LED DRLs return.

Inside, you get treated to a series of additional upgrades. The SEL has a 10-color ambient interior lighting system that lets you alternate between your preferred colors. The driver's seat is power-adjustable six ways, and there is power lumbar support. The front seats are heated, and the rear outboard ones gain heating as well. The leatherette-wrapped steering wheel has a heating function too. The contrast stitching on the sport bolstered comfort front seats is also back.

Since the 8-speed automatic transmission is standard issue, you also get the selectable Drive Modes and engine start/stop. As far as tech goes, you get upgraded to wireless smartphone app integration with App Connect. Beats Audio gets included as well. Voice control and a proximity sensor get added to the larger 8-inch touchscreen infotainment display system, and you get a total of 2 front USB-C data ports and 1 USB-C charging port. High beam control gets added, as do Lane Assist, Active Blind Spot Monitor, and Rear Traffic Alert. Remote start, wireless charging for your devices, and the Volkswagen Digital Cockpit get tacked on for good measure.

Compare the SEL vs SEL Premium Trims. What is the difference?

At the top of the 2022 Volkswagen Jetta line-up is the SEL Premium. It packs in a lot of the features found on lower trim levels, including the R-Line's fog lights with the low-speed corner-illuminating feature. A memory feature gets added onto the power folding and heated side mirrors, and there is also a rear sport valance to help distinguish the SEL Premium on the outside.

Inside, you get a memory function added to the power-adjustable driver's seat. And the seats themselves get upgraded to a leather upholstery. The front seats also have a ventilation function. The only other major difference to the SEL Premium is that you also get a Discover Media touchscreen navigation system on the 8-inch touchscreen display. Otherwise, the SEL's features all carry over to the SEL Premium.

Here is the part where we give our final recommendations on which trim level to choose. As far as the 2022 Volkswagen Jetta is concerned, you will have to spend more to get more. Sure, the base price looks really reasonable, but as you can now see, you do not actually get that much for the S trim level. You will have to go up a few rungs on the trim level ladder to get anything substantially different.

What we recommend doing is going for the R-Line, especially if you enjoy the idea of driving a stick shift. Not a lot of people still want one, but if you are one of those rare folks who prefer a stick to an automatic, then the R-Line is going to be right on pace with what you need. It offers some significant upgrades over the S and has some unique exterior styling cues that help it stand out from the rest of the line-up. That being said, though, the entire line-up does not do much to stand out from the crowd.

If you do not want to drive the manual transmission, then go for the SE trim. It is reasonably priced but doesn't skimp on the details like the S trim level does. The SE offers an optional package that lets you equip a sunroof and heated front seats - things that are not commonly offered at this price point. Of course, the SEL trim level adds a lot more for the price, and you get more tech-oriented features, such as the voice recognition system. Getting more driver aids - like adaptive cruise control, lane keep assist, and automatic high beam assist - might be something you would want to spend a few extra grand to get, too.

On the whole, the 2022 VW Jetta is a so-so small sedan. It does not quite hold up against stiff competition that it faces within this competitive segment, and its lackluster powertrain showcases just how "meh" the Jetta can feel by comparison. However, there will be buyers out there looking for a bargain, and they are likely to find that the Jetta is an affordable alternative. But don't expect to get as much enjoyment from its driving performance as you would some of its competitors.