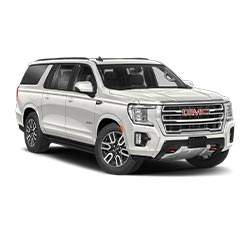 GMC Yukon XL Pricing for the SLE, SLT, AT4 and Denali Trims

Price Tip:
To find the best possible price on a new GMC Yukon XL, shop prices online first. Get up front pricing before you walk into a dealership. We recommend the following free services; Car Clearance Deals,   Edmunds,   NADAguides,   Motortrend  &   CarsDirect
These services will offer you the lowest prices and supply you with multiple competing price quotes. You will know the best price before you visit the dealer.
How to Calculate The Dealer Cost of a GMC Yukon XL:

The 2022 Yukon XL is an even bigger version of the full-size Yukon SUV. The GMC Yukon XL comes with three powerful engines, a comfortable cabin that can be decked out with nice amenities, and a lot of high-tech elements. It looks rugged and modern, too, so it can drive around in style.

2021 was a year in which the GMC Yukon XL was given a major redesign. This year, the company has given it a few more updates. They include a 12-inch digital gauge display and a new exterior color, Redwood Metallic. The Denali has received a power-sliding center console, and the AT4 has been given the option to be upgraded with a 6.2-liter V8 engine. Finally, GMC has gone with a slightly different approach to the infotainment system. The Yukon XL now uses Google built-in technology, which many feel that is more advanced than the system that was used previously.

Clearly, all of these engines are quite capable. Any of them would make the SUV feel strong and able to handle a variety of challenges. In terms of towing capacity, these engines don't differ that much. They all fall in a range between about 7,400 and 8,000 pounds.

It's important to note that not all engines are available on all Yukon XL trims. The 5.3-liter V8 and the turbo diesel are the options on the first two trims, which are the SLE and the SLT. The next trim is the AT4, and it's available with either V8 engine. Lastly, there's the Denali trim. It can run on the 6.2-liter V8 or the turbo diesel.

This SUV has an imposing presence. Its overall length is 225.2 inches, which makes it about 15 inches longer than the standard Yukon. Having such a big cabin obviously means that passengers have a lot of room to spread out. In the third row, there's a generous 36.7 inches of leg room, so adults can be comfortable sitting in the back. The second row has 42 inches of leg room, and this area would feel even more spacious if the model is one that has a pair of second-row bucket seats instead of a bench seat.

Something to mention is that the SLE is available with a first-row bench seat. This would give the vehicle a total of nine seating positions. Some buyers may need that extra spot, so it's nice that this is an option.

People can fit plenty of gear in the Yukon XL, and it's likely that they'll still have room to spare. Behind the third row of seats, there's a large cargo hold that has a volume of 41.5 cubic feet. Lowering the third row expands cargo volume to 93.8 cubic feet, and lowering both the second and third rows opens up an incredible 144.7 cubic feet of storage space.

All trims have power-adjustable driver's seats. Most also have a power-adjustable front-passenger seat as well as heated and ventilated front seats. A heated steering wheel and heated second-row outboard seats are available. Power-folding second-row and third-row seats are optional as well, and the seating upholstery can either be cloth or perforated leather.

High-tech equipment has been incorporated into many areas of the Yukon XL. As mentioned earlier, it features a 12-inch digital driver information center, and it also has a 10.2-inch multicolor touchscreen. Android Auto and Apple CarPlay are standard, and using the Google built-in technology, people can access Google Play, Google Assistant, and Google maps. A Bose nine-speaker sound system and a Bose 14-speaker sound system are both available, and SiriusXM is standard.

Another fun feature that this GMC can have is a rear-seat media system. This consist of two 12.6-inch HD screens, Wi-Fi projection capability, and two wireless headphones. Passengers can watch videos or play games using streaming services.

This SUV can provide up to 13 different camera views. Cameras have been placed in various spots around the vehicle so that drivers can always know exactly how they're doing in relation to other vehicles or obstacles. The rearview mirror can show a video feed from the rear-facing camera, and a camera can help with hooking up a trailer.

Note: All GMC Yukon XL MSRP, invoice and dealer cost dollar figures above are subject to change without notice.