2016 Audi A3 Convertible Pros vs Cons. Should You Buy? 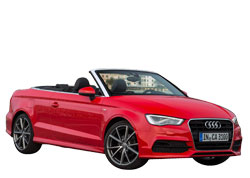 Should You Buy a 2016 Audi A3 Convertible? Here are the Pros and Cons

Audi has stepped up its game with the 2016 Audi A3 Convertible, delivering the authentic Audi style at an entry-level price point. With an elegantly designed interior and a turbocharged four-cylinder engine, this convertible shines on the highway and on twisting back roads.

The 2016 Audi A3 Convertible is one of the models in the second year of Audi’s soft-top convertible production. The car (also known as an Audi A3 Cabriolet) is a two-door convertible with an automatically folding roof and room for four people. New in this year’s model is a rearview camera for backup assistance and parking sensors that can alert the driver when the curb or another car is too close. Also added are heated mirrors and upgraded washer nozzles. But that’s not all the 2016 Audi A3 Convertible has to offer.

The 2016 Audi A3 is offered with three amazingly powerful turbocharged options for engines— however, only two of these are offered for the convertible. These two are the 1.8-liter four cylinder, 2.0-liter four-cylinder. Each engine comes standard with a six-speed automated manual transmission that functions as an automatic transmission. This offers great power for highway driving.

The design of the Audi’s interior is somewhat reminiscent of the sleek lines of a jet, from the robust air vents to the contour of the driver and passenger seats. The way the console is arced allows the eye to flow nicely across the interior, taking in the smooth curves of the inside of the car.

The 2016 Audi A3 Convertible comes standard with a multitude of technological advancements, including a 10-speaker audio system and what is widely regarded the best infotainment systems in the industry (The MMI infotainment system). The retractable display screen has options available such as streaming from the rearview camera, a Wi-Fi hot spot, and voice or touch-controlled navigation through Audi’s MMI Navigation Plus system.

The convertible has three main trim levels: Premium, Premium Plus, and Prestige. While everything mentioned so far is included in the Premium package, the Premium Plus introduced keyless entry and ignition. The Prestige edition goes even further with a new “S line” exterior package and an upgraded technology package (including adaptive cruise control and a collision prevention system).

For a luxury car, the 2016 Audi A3 Convertible is one of the most efficient in its class regarding gas usage. The 1.8-liter comes in at a 28 mpg combined, and the 2.0-liter measures at 26 mpg.

The Audi convertible performs better than average in braking tests. With the all-season tires that come with the car, the Audi braked from 60 mph to 0 mph in just 118 feet. With the larger summer tires, the convertible can brake more quickly, averaging 105 feet in its braking tests.

In both the Premium and Premium Plus packages, the Audi has automatic seatbelt tightening and window closing in case of frontal collisions. Also included is the aforementioned rearview camera. The Prestige kicks it up a notch with its lane-departure warning system and automatic braking when faced with a frontal collision. The collision software is built by Audi and has been awarded a five-star rating in government crash tests.

Whether in the front-wheel drive only or the all-wheel drive, the Audi convertible handles extremely well. The car rides evenly over bumps and has a very strong grip on the road surface. The brakes may be a little sensitive, but after a few minutes in the car feel natural. The car’s steering is very precise, and it feels agile no matter where you take it.

After a long day on the road, the nicest feeling in the world is to be able to find a parking spot. The Audi A3 lets that happen more easily than ever due to its small size. It is easy to slip in and out of smaller than average spaces, in part due to the rearview camera and backup assistance.
Buying Tip: To avoid overpaying on a new car, shop prices online first. Get up front pricing before you walk into a dealership. We recommend the following free services; Car Clearance Deals,   Edmunds,   CarsDirect,   NADAguides  &  Motortrend. These free services will offer you the lowest prices and supply you with multiple competing price quotes. You will know the best price before you visit the dealer.

The 2016 Audi A3 Convertible is not a leader in its class for room in the backseat. While there may be plenty of room and customizability in the driver and passenger seats, the back seats are not comfortable for adults during longer trips.

Measuring at just ten cubic feet, the trunk will easily fill up if more than a few bags are placed inside.
However, the back seats do fold down, allowing for longer or larger items to fit in the convertible.

Android and non-iPhone users are out of luck connecting with the MMI infotainment system, as Audi has a proprietary iPod/iPhone-only interface.

In comparison to its nearest competitors, the 2016 Lexus IS and the 2016 BMW 3-Series, the Audi A3 beats both hands down. With a much cheaper MSRP and better performance than both of its rivals, the 2016 Audi A3 Convertible is a perfect choice for a luxury convertible with a powerful engine.