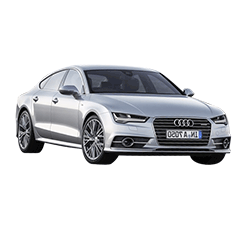 Should You Buy a 2016 Audi S7? Here Are Some Reasons For and Against

The 2016 Audi S7 is one of the sportiest hatchbacks on the market. Although the S7 is an expensive driving machine, its performance is only rivaled by a few other luxury vehicles. Equipped with an extremely potent engine, the Audi S7 can quickly race past the competition. On the inside, the car offers all of the high-tech features that money can buy. From a styling perspective, the S7 may be the most attractive hatchback on the road.

At first glance, the 2016 Audi S7 looks like a traditional sports sedan. However, it is actually a sleek hatchback. Fitted with an aggressive front bumper and gorgeous LED headlights, the new S7 has the appearance of a race-bred sports car. Even the standard 19-inch rims look stunning. Audi also offers a special Black Optic appearance package, which includes a blacked-out grille and an even sexier set of wheels.

A turbocharged V-8 engine comes standard on the 2016 Audi S7. The 4.0-liter engine can pump out a startling 450 horsepower and 406 pound-feet of torque. While the Audi S7 is not the lightest vehicle, it can still hit 60 mph in about 4.5 seconds. When accelerating on the highway, the burly sound of the engine can be addictive.

With so much power resting under the hood, very few people expect the Audi S7 to be good on gas. However, the car’s fuel economy is really a pleasant surprise. When traveling along the highway, the S7 can deliver an impressive 27 mpg. This means that the car can be driven on an everyday basis with no problem.

The Audi Drive Select system comes standard on every model. It enables drivers to select their preferred driving mode. Not only can the driver alter the performance of the transmission, but they can also fine-tune the steering system. While the Comfort mode softens the suspension stiffness, the Dynamic mode transforms the 2016 S7 into an aggressive sports car.

Automotive critics from around the globe praise the S7’s well-crafted interior. The car’s hefty price tag reflects Audi’s use of high-quality materials. Leather upholstery comes standard. Due to its hatchback design, the 2016 Audi S7 has plenty of cargo space. When the rear seats are pushed down, travelers can pile lots of luggage into the back.

Everyone seems to rave about the Audi S7’s poised driving dynamics. An adaptive air suspension system enables the car to float over bumpy roads. However, an optional sport rear differential gives the hatchback even better grip on the road. Drivers can swing around curves with great confidence. This is the type of vehicle that never becomes boring to drive.

Offered in the Sport package, the sport exhaust sings a beautiful tune. As soon as the driver pumps the throttle, the V-8 engine roars to life. While some sports car owners prefer to ride in silence, most of them appreciate a powerful-sounding exhaust system. The S7’s sport exhaust features black tailpipes, which adds to the car’s aggressive appearance.

All versions of the 2016 Audi S7 are loaded with luxurious features. Music lovers can jam to their favorite songs with the Bose audio system. Meanwhile, the blind-spot monitoring system gives the driver an extra set of eyes on the road. Some of the other standard features include navigation, a power lift-gate, heated sport seats, and a head-up display. Audi also offers several advanced safety systems.

The 2016 Audi S7 is built for the drivers who want to be different. The super-sporty hatchback has its own unique design. Unlike some vehicles, the S7 does not become lost in the crowd. Other car enthusiasts will certainly want to get a closer look.

Buyers can expect to pay at least $84,000 for a brand-new Audi S7. The average Joe will not be able to shell out this kind of money.

Audi does not offer a manual gearbox for the 2016 Audi S7. This could be a letdown for the driving enthusiasts who are accustomed to using a manual clutch.

3) Can Only Seat Four Passengers

Due to the inclusion of contoured rear seats, the S7 can only seat four passengers. In comparison, the regular Audi A7 can seat up to five passengers.

The Mercedes-Benz CLS550 and the BMW 650i Gran Coupe compete against the 2016 Audi S7. While both of these vehicles prove to be great driving machines, the S7 benefits from Audi’s legendary Quattro AWD system. Although the Porsche Panamera is a powerful performer as well, some car shoppers may find its styling to be unappealing.

The 2016 Audi S7 is clearly one of the most exciting hatchbacks in America. Drivers will adore its versatility. Audi’s Quattro AWD enables the S7 to be driven throughout the year. Although the Audi S7 is quite expensive, it does not shortchange the owner in terms of performance or luxury. It is a rare vehicle that only a few people will get a chance to own.