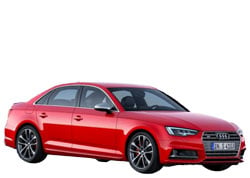 To people who may not be keen motoring enthusiasts, the 2016 Audi S4 may perhaps be just another particularly nice-looking version of the 2015 Audi A4luxury sedan. However, this luxury sport sedan is indeed more than just that.

True, the new 2016 S4 shares most of its body features with the A4 sedan, but from there it becomes more distinct with several aggressive details. The 2016 S4 stands out due to its handsome and clean look.

The 2016 S4 is going to be the last among the supercharged S4s, as auto maker Audi is moving to turbocharging cars in 2017. However, the Audi 2017 version will not be distinctly different or considerably faster compared to the 2016 S4.

Any car enthusiast will smile from the performance of both the S4 and A4 models. Critics have reported that both models offer a comfortable ride. The car also comes with nimble handling when you push the car through corners.

The S4 comes with several optional handling equipment ideal for all weather conditions.

Offering what critics term as understated refined and confident performance, the 2016 Audi S4 is an excellent option if what you seek is an agile luxury sport sedan that supplies an additional kick.

The 2016 S4 has a standard sports suspension and the brakes perform quite well to inspire confidence as you cut sharp corners.

The reputation of Audi for beautifully crafted interiors stays safe with the new 2016 Audi S4 luxury sedan. The S4/A4 interior brings all the features any car lover would need or want to see in a modern luxury sedan car.

Auto journalists are in full agreement that the cabin and dashboard are top-notch, designed with great style and quality materials throughout.

Included in the dash features are:

The Audi S4 and A4 come with outstanding MMI infotainment system features with a truly dizzying array of advanced and high-tech options. It's a very effective interface with soothing red backlighting that nicely illuminates just about every knob, button and switch on the system.

The 2016 Audi S4 and A4 can hold 5 passengers on seats that are very comfortable. The standard leather seats are good, although the sport seats provide extra-support for both long hauls and enthusiastic speedy driving.

Whether you're are in the market for a premium priced machine or for a luxury sedan that is modestly priced, the 2016 Audi S4 and A4 sedans are offering you a broad range of pricing and models.

However, with the Audi S4, really what you're paying for is what comes under the car’s hood.

The 2016 Audi S4 brings a solid package of safety equipment carried over from last year. Available additional safety enhancements installed on the 2016 S4 include:

National Highway Traffic Safety Administration crash-test ratings are excellent at five stars across the board.

The 2016 S4/A4 has not experienced safety recalls from the National Highway Traffic Safety Administration. Audi covers the 2016 S4/A4 with a limited 4-year/50,000-mile warranty.
Buying Tip: To avoid overpaying on a new car, shop prices online first. Get up front pricing before you walk into a dealership. We recommend the following free services; Car Clearance Deals,   Edmunds,   CarsDirect,   NADAguides  &  Motortrend. These free services will offer you the lowest prices and supply you with multiple competing price quotes. You will know the best price before you visit the dealer.

Critics say that the MMI control layout is unintuitive. It has been said that the control system of the Audi's MMI somewhat complicates most of the climate and audio functions.

At 12.4 cubic feet, the 2016 S4 trunk space is rather low for that vehicle class. The cabin storage is subpar, as it only consists of a deep glove box, small map pockets on the doors and a center console.

Essentially, the Audi S4 is unchanged from the 2015-year model. Being a crossover, you should not expect too many options or new goodies from the S4 of 2016. By no means is it a fresh model entry into the market, and is in fact to be replaced come 2017.

How It Stacks Up to The Competition:

Being of the same class, it is possible to compare the 2016 Audi S4/A4 with the Mercedes-Benz C-Class and the Lexus RC models.

Although many consider this car a bit dated in several areas such as the interior when pitted against newer designs and German rivals, the new 2016 Audi S4 remains a powerful contender. It is still very competent in both the performance and luxury departments.

The Audi S4 has proved itself popular with both performance-oriented drivers and businesspeople wishing to blend sportiness and comfort.