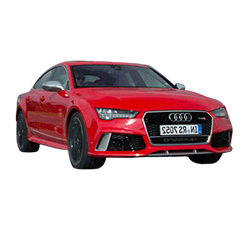 Should You Buy a 2016 Audi RS7? Here Are Some Reasons For and Against

Audi is known for developing high-performance vehicles that provide constant thrills. Equipped with a super-potent engine and a track-tuned suspension system, the new 2016 Audi RS7 is one of the most thrilling full-sized sedans on the planet. Despite the RS7’s performance capabilities, it is still outfitted with a number of luxurious components. Although the 2016 Audi RS7 is an expensive ride, it definitely lives up to its hype. Many automotive experts describe it as a luxurious race car.

Aside from the 2016 Audi RS7’s outstanding driving dynamics, it is also a legitimate family vehicle. In fact, it is the perfect alternative to an exotic two-door sports coupe. Even tall family members will be able to sit comfortably in the back. Long-distance travelers will find the Audi RS7 to be a great touring vehicle.

The 2016 Audi RS7 is dramatically sportier than the regular A7 sedan. The RS7’s blacked-out grille gives it a very aggressive appearance. Like the rest of the Audi lineup, the new Audi RS7 features distinctive LED running lights. When traveling along the road, the sedan’s 20-inch performance wheels look spectacular. On the rear, the oval exhaust tips highlight the sedan’s aggressive character.

Most people would expect the RS7 to suffer from poor fuel economy. Fortunately, that is not the case. With a highway fuel economy rating of 27 mpg, the high-powered RS7 could be used as a daily-driver. However, the owner must drive with a light foot in order the get the best possible fuel efficiency.

Thrill seekers will love to get behind the wheel of the 2016 Audi RS7. The twin-turbocharged 4.0-liter, V-8 engine pushes out an exhilarating 560 horsepower and 516 pound-feet of torque. When properly launched, an experienced driver can reach 60 mph in less than 3.5 seconds. Only a few high-performance sedans can overtake the RS7 in a drag race.

Although the 2016 Audi RS7 is a full-sized sedan, it handles the road like a much smaller car. Equipped with a sports-tuned suspension system, the RS7 is perfectly at home on a curvy back road. Fortunately, the ride quality still remains quite comfy. The sedan’s pinpoint steering system will also come in handy during face-paced driving situations.

Like any true performance car, the Audi RS7 is designed with a powerful braking system. A weak braking system would definitely be a major drawback. The carbon-ceramic brakes bring the big sedan to a prompt stop. The enhanced stopping power will definitely help to enhance passenger safety. Meanwhile, the drilled brake rotors also help to eliminate heat buildup.

Automotive critics from around the globe rave about Audi’s Quattro AWD system. Not only does the Quattro AWD system enhance the sedan’s handling, but it also makes it a much more capable driving machine in bad weather. Unlike some of the other sports cars that must remain parked during the winter, the RS7 is equipped to handle snowy road conditions.

For the drivers who appreciate an aggressive exhaust note, the Audi RS7 will surely attract their attention. While the exhaust is relatively quiet when cruising along the freeway, it lets out an aggressive bark as soon as the throttle is punched. The exhaust actually crackles when the transmission shifts up to the next gear. This gives the sedan an even greater fun factor.

The inside of the 2016 Audi RS7 is loaded with luxurious features. A flat-bottomed steering wheel gives the driver total command of the sedan. Drivers will also find the retractable display screen to be a major convenience. Some of the other cutting-edge features include massaging seats, voice-controlled navigation, and a Wi-Fi hot-spot. However, Audi’s satisfying infotainment system is clearly one of the sedan’s most rewarding features.

Like an albino wolf, the 2016 Audi RS7 is rarely seen in person. Unlike a mass-produced sedan, the Audi RS7 is a special vehicle that only a lucky few will own. As soon as it rolls out of the owner’s driveway, it is bound to attract plenty of attention.

The average car shopper simply cannot afford to buy a 2016 Audi RS7. With a sticker price in excess of $100,000, the racy RS7 is obviously not a typical family sedan.

An eight-speed automatic gearbox comes standard on the 2016 Audi RS7. While Audi’s Tiptronic transmission is impressive, some drivers may still prefer a traditional manual clutch.

During high-performance driving situations, the car’s fuel efficiency will plummet significantly. This is especially true when racing from one stoplight to the next.

Some of the competition includes the Mercedes-Benz CLS63 AMG and the BMW M6 GranCoupe. Not only is the 2016 Audi RS7 faster than the BMW M6, but it also $10,000 cheaper. Furthermore, the BMW sports sedan does not even offer an AWD option.

From a sheer performance perspective, the 2016 Audi RS7 is in an elite class of sports sedans. As soon as the driver presses the accelerator, the RS7 transforms into a fire-breathing monster. However, the powerful sedan is still a great traveling companion. The sedan’s reasonable gas mileage makes it an even more rewarding choice.