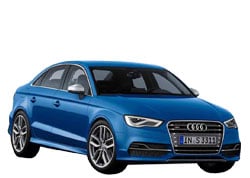 He 2016 Audi S3 is stronger, sportier version of the Audi A3. This is part of Audi's flagship sedan family, with the S3 being the strongest in the family and by far the most desirable. While this car offers plenty of power and lots of things to love, an objective look shows a few things that some car buyers may not like. These pros and cons will show you if the Audi S3 should be your next car.

What's New for 2016?
Aside from begin slighter stronger than last year’s model, the major changes to the Audi S3 come in the standard features. Buyers will now be able to enjoy advanced parking sensors, rear-view cameras, aluminum interior trim and heated mirrors without any additional cost. The changes may not seem that huge, but you'll love having these features and you'll wonder how you lived without them.

The Audi brand is known for its superior handling, so it should come as no surprise that the 2016 Audi S3 shares this familiar trait. The driving dynamics make this a car you'll want to drive, and the majority of reviewers noted this as one of the best reasons to buy the Audi S3.

No one wants a noisy cabin, especially if you're zooming down the highway at breakneck speeds. The 2016 Audi S3 provides a quiet cabin where outside noises will hardly reach you. You might be driving down a busy highway, but that won't disturb you from having a fun conversation with your passengers.

With a nearly 300 horsepower engine, the Audi S3 makes short work of tight, twisting turns. You won't lose power as you travel through winding roads, which ensures that even the most labyrinthine paths feel like smooth, comfortable rides through the country. The superb handling also ensures that the car stays planted on the ground so that you don't feel the frame struggling to keep up with turns.

The 2016 Audi S3 doesn't disappoint when it comes to style. With zero-gap panels and beautiful materials to complement the luxury environment, the Audi S3 gives you everything you expect with a top brand. Both you and your passengers will awe at just how beautiful the inside looks and feels.

This navigational system comes standard with the Audi S3. There is a touchscreen display that emerges from the dash that includes some apps, but the MMI Navigation Plus app is the star of the show. This GPS not only accepts voice commands, but you can also write the destination with your finger, and the system will translate it into text.

The 2016 Audi S3 offers amazing safety, and it received great marks with the Insurance Institute for Highway Safety and the National Highway Traffic Safety Administration. With the former, it received the highest possible marks. The latter gave it two five-star ratings and two four-star ratings, meaning this car can take a reasonable amount of damage.

The 2016 Audi S3 is currently priced at $42,500 for the premium trim. This is quite good for a luxury sedan, and it's significantly cheaper than the CLA 45 AMG's $48,650 price tag. You'll get a lot of power for a fairly small price, and both new and existing Audi owners will have a hard time not upgrading with such a reasonable expense.

The 2016 Audi S3 drivetrain will power through even the harshest environments without slowing down. It comes standard with all-wheel drive and a six-speed automated transmission. This is known for smooth gear changes without any hiccups or lags.

For a subscription fee, Audi S3 owners can join Audi Connect. Not only does this give you access to Google Earth as a GPS choice, but the car will act as a hotspot for up to eight devices. This is a must-have in today's digital world.


The Audi S3 can go from zero to 60 in just 4.7 seconds. It can also reach a top speed of 155mph. While you'll rarely have to accelerate this fast, you'll love how quickly you can zoom around the other cars on the street while experiencing the advanced handling the Audi brand offers.
Buying Tip:

For some this won't be a big deal, but for others, it's a huge pet peeve. While the 2016 Audi S3 has some exterior changes, such as new rims and more color choices, the body looks almost the same as last year's model. This might be a problem for drivers who love the style, but the truth is that the Audi S3's body is incredibly beautiful.

This car doesn't give too much room to passengers. The people sitting in the back might need to stretch their legs after a long drive. The front seats are roomy enough, so this shouldn't be much of a problem if you only have one passenger.

The cargo space is a little small for this car class, but it's not the smallest on the list. You'll get about 12.3 cubic feet of trunk space. This may not sound like much, but it's more than enough for a few suitcases and luggage bags.

The 2016 Audi S3 has some major competition in the luxury sedan department, but you'll find that it fairs impressively against its rivals. The Subaru WRX STI has been listed as a big competitor against the S3 with a very reasonable price tag of $35,000 and a similar engine of 268 horsepower. While they have similar levels of power, the WRX STI lacks the elegant design of the S3 and it has relatively poor fuel economy. It's also not quite as balanced as the S3, but the interior is a little roomier.

Some may balk at the suggestion, but Acura has come out with its luxury sedan in the form of the 2016 Acura ILX. It severely lacks the horsepower of the S3, clocking in at only 200 horsepower, but its price is less than $30,000, and it offers a good amount of legroom. Its eight-speed transmissions make gear changes slightly smoother, but the S3 dominates in power and brand authority.


The 2016 Audi S3 gives you everything you expect from an Audi: unparalleled power, amazing control, and a beautiful design. While some people are annoyed that the body is nearly the same as last year's model, and there could have been more room for passengers, this is still a great car for those looking to get a luxury sedan.
2016 Audi Buying Guides:
• 2016 Audi A3 Convertible Pros VS Cons

Compare Local Dealer Prices
Find the Best Deal
Save Thousands on a 2016 Audi S3! Start Your Own Online Price War