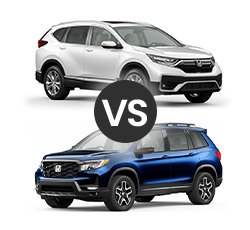 2022 CR-V vs Passport - How Do They Stack Up? What are the differences?

Drivers in the market for a new two-row SUV should strongly consider Honda’s latest offerings. The 2022 Honda CR-V and the 2022 Honda Passport rank among the top options in their respective classes. While the Passport competes in the midsize segment, the CR-V is a compact model.

While both of these SUVs are highly recommended family vehicles, car shoppers may favor one over the other. Automotive reviewers applaud the CR-V for its superb value and comfortable accommodations. Meanwhile, the Passport is geared more towards travelers who seek outdoor adventure. In this head-to-head comparison, we’ll find out whether the CR-V or the Passport is the better pick.

The 2022 Honda Passport is noticeably longer and wider than the 2022 Honda CR-V. Because of the CR-V’s smaller stature, it’s a less challenging vehicle to park in cramped spots.

In terms of front legroom, there’s not a significant difference between these two Honda models. However, the CR-V does give folks sitting in the backseat an extra 0.8 inches to stretch their legs. One of the Passport’s key advantage’s is its wider design, which will come in handy when three passengers are riding in the rear. Occupants will appreciate the extra shoulder room.

The Passport has a slightly larger cargo area, which provides 41.2 cubic feet of space for your extra gear. Most families will have no complaints about the CR-V’s 39.2 cubic feet of cargo space. In fact, few compact SUVs on the market provides as much cargo space as the CR-V.

When it comes to styling, there’s no denying the Passport’s more rugged exterior design. It looks more like a traditional SUV. Even the base Sport trim receives standard 20-inch alloy wheels, thus giving the SUV a powerful stance. For the 2022 model year, Honda added a new TrailSport trim to the Passport’s lineup. Unique 18-inch wheels with all-terrain tires set it apart from the other trims.

Although the CR-V doesn’t look as tough as the Passport, it still has an appealing appearance. Upgraded wheels are found on the higher trim levels. While all versions of the Passport receive LED headlights, only the range-topping CR-V Touring come equipped with LED headlights.

When preparing to take the 2022 Honda CR-V for a spin, test drivers will have two powertrains to pick from. Most people are expected to select the CR-V’s standard turbo four-cylinder engine. It pushes out a solid 190 horsepower, which promotes a rather spry performance. Road tests show the CR-V clocks a sufficient 0-60 mph time of around 8.0 seconds.

Folks seeking greater fuel savings will be interested in the CR-V’s available hybrid engine. With the assistance of an electric motor, it manages to generate a total of 212 horsepower. Not only is the hybrid-powered CR-V more efficient, but it also accelerates to 60 mph in a quicker 7.5 seconds.

Honda does not offer the Passport with a hybrid powertrain. Every trim comes equipped with the same award-winning, 3.5-liter V6 engine. Output stands at a more than adequate 280 horsepower. According to testers, the SUV’s nine-speed automatic transmission shifts smoothly in virtually every driving situation.

The Passport’s punchy acceleration tends to win over many drivers. When launched from a standstill, this SUV takes only 6.8 seconds to hit 60 mph. Even when climbing mountainous roads, performance is strong.

Of these two models, the Passport is the best option for pulling a load. It boasts a maximum towing capacity of 5,000 pounds. By comparison, Honda rates the less powerful CR-V to tow up to 1,500 pounds. Cargo, such as fishing boats and small campers, will likely put too much strain on the CR-V.

Both of these SUVs offer better-than-average road handling. A wide stance and nicely weighted steering help it to feel remarkably stable. The Passport inspires far more confidence than a truck-based SUV. Many people will find the CR-V’s precise driving dynamics to be just as satisfying. City dwellers can also take advantage of the CR-V’s tighter turning radius.

Families can expect these SUVs to deliver a smooth and quiet highway ride. They also do a good job of absorbing rough city streets. Like the Passport, the CR-V is great for taking long road trips.

The Passport takes around 130 feet to come to a complete halt, which puts it a notch behind some competitors. Passport testers have also experienced noticeable nosediving upon making an abrupt stop. A shorter 0-60 mph braking distance of 119 feet gives the CR-V an advantage over its larger stablemate. Furthermore, it feels a bit more stable when making emergency stops.

All-wheel drive is offered on the CR-V, thus enabling commuters to churn through the snow. However, this crossover isn’t the best option for going off-road. The Passport is a better pick for folks who seek outdoor adventure. A more advanced torque-vectoring 4WD system and Intelligent Traction Management enable the Passport to perform better on rugged trails. Honda also equips the Passport’s new TrailSport trim with more aggressive all-terrain tires.

The 2022 Honda CR-V scores well in the comfort department. Car reviewers applaud this SUV for its supportive front seats, which feel relaxing throughout the day on long drives. Wide front seats also enable the Passport to offer a high degree of comfort.

A few more amenities are offered on the 2022 Honda Passport. While the CR-V offers heated front seats, only the Passport allows passengers to experience the coolness of ventilated front seats. Standard leather upholstery gives the Passport another advantage over the CR-V.

Honda’s popular Display Audio infotainment system is standard on the Passport. Its 8.0-inch touchscreen display can be paired to the driver's phone through either Apple CarPlay or Android Auto. This interface’s easy operation makes it rewarding to use. The base CR-V features a 5.0-inch infotainment display that lacks smartphone integration and touchscreen funtionality. All the other CR-V trim levels come with a nicer 7.0-inch touchscreen.

A heated wiper rest zone is exclusively available on the Passport. This features may prove to be a great asset for folks living in cold-weather regions. It will help melt away snow and ice. Both of these SUVs offer integrated navigation, wireless charging, and a hands-free rear liftgate.

Car shoppers seeking affordability will prefer the CR-V. Honda lists this popular crossover with a starting MSRP of $26,800. Passport prices begin a steeper $38,370. Although the Passport demands more money, it does come loaded with a greater number of premium features. Highlights include front-seating heating, a more modern touchscreen interface, leather upholstery, and proximity keyless entry with remote start.

The 2022 Honda Passport and the 2022 Honda CR-V offer great impact protection. They both received the NHTSA’s highly desirable, five-star overall safety rating. However, only the CR-V was named an IIHS Top Safety Pick award.

One of the Passport’s most beneficial features is its standard blind-spot monitor. It helps keep drivers aware of vehicles that may be beyond their field of vision. They will have more security when changing lanes and backing up. While blind-spot monitoring is available for the CR-V, it’s not offered on the SUV’s lower trim levels.

When comparing these two Honda models, car shoppers must decide what they desire the most in a new family vehicle. Cost will be a big determining factor for some people. Although the base 2022 Honda CR-V isn’t nearly as luxurious, buyers have the potential to save thousands of dollars.

Fuel economy is another factor that may impact a person’s decision. Drivers seeking maximum fuel economy will want the CR-V. While the 2022 Honda Passport tops up at 25 mpg, the CR-V can return up to 34 mpg. An available hybrid powertrain enables the CR-V to save commuters even more fuel in the long run.

The CR-V is definitely a stylish crossover. However, some drivers will be more drawn to the Passport’s more adventurous exterior design. Its front fascia is noticeably more rugged. A boxier shape also makes the Passport look more like a traditional SUV.

Most people in the market for a daily family vehicle will be perfectly pleased with the CR-V’s level of performance. Its standard turbo four-cylinder powertrain is responsive. Choosing the available hybrid powertrain actually enhances acceleration. Nonetheless, the V6-powered Passport clearly packs more brawn under the hood. Not only is the Passport quicker, but it’s also a far better option for towing.

Drivers who plan to take their family on a camping adventure will find the Passport to be a more suitable option. Its more advanced 4WD system will prove to be valuable when traveling on rugged trails. The Passport’s available Intelligent Traction Management system also aids its off-road prowess.

In terms of comfort, these SUVs are an extremely close match. However, more premium amenities come standard on the Passport. Niceties, such as ventilated front seats and tri-zone automatic climate control, are only offered on the Passport. While the CR-V provides a class-leading amount of legroom, a wider backseat enables the Passport to better accommodate three passengers in the rear.

At the end of the day, both SUVs are standout options. They offer similar long-term reliability and have a high resale value. Good safety scores also give families a strong sense of protection.