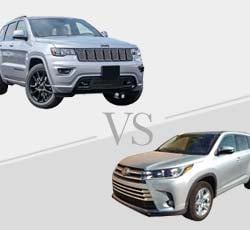 2019 Grand Cherokee vs Highlander - How do they stack up? Which is Better?

When it comes time to upgrade your current family vehicle, there’s a good chance you’ll be in the market for a new SUV. The 2019 Jeep Grand Cherokee is definitely an appealing choice. Drivers love the Grand Cherokee’s adventurous design and powerful engine lineup. You should also give the 2019 Honda Pilot some serious consideration. It’s easy to maintain and extremely comfortable for families. Let’s find out how well the Grand Cherokee stacks up against the Honda Pilot.

While there are several engines available for the 2019 Jeep Grand Cherokee, many people choose the base V6 engine. It pushes out a satisfactory 295 horsepower and 260 lb-ft of torque. An eight-speed automatic transmission is standard on every trim. If you desire enhanced towing capabilities and stronger acceleration, step up to the Grand Cherokee’s Hemi V8 engine. This 5.7-liter engine develops 360 hp and 390 lb-ft of torque.

Under the hood of every new 2019 Honda Pilot is a 3.5-liter, V6 engine. Honda tunes it to generate 280 hp and 262 lb-ft of torque. While a six-speed automatic transmission comes standard, a nine-speed gearbox is found on the more luxurious trims. Expect the Honda Pilot to offer strong performance. It’s actually just as quick as the V8-powered Grand Cherokee. You can blame the Grand Cherokee’s extra weight for its compromised performance.

If you really want to dial up the driving excitement, choose one of the Grand Cherokee’s high-performance models. The Grand Cherokee SRT’s V8 engine pounds out a monstrous 475 hp and 470 lb-ft of torque. Meanwhile, a supercharged V8 engine enables the Grand Cherokee Trackhawk to produce a staggering 707 hp and 645 lb-ft of torque. This powerhouse clocks a 0-60 mph time of 3.5 seconds, which puts it among the quickest SUVs in history. No version of the Honda Pilot can compete with these high-output models.

When it comes to towing capabilities, the 2019 Jeep Grand Cherokee takes the lead. It has the ability to pull more than 7,000 pounds. Meanwhile, all-wheel-drive versions of the Honda Pilot can tow up to 5,000 pounds.

The Honda Pilot is a slightly more efficient family hauler. It’s rated by the EPA to deliver up to 27 mpg on the freeway. By comparison, you can expect the V6-powered Grand Cherokee to return up to 26 mpg. Of course, getting the Grand Cherokee with a V8 engine will cause fuel economy to take a major hit. Furthermore, high-performance variants of the Grand Cherokee need premium gasoline for optimum production.

You should have no issues taking the Honda Pilot on a typical camping adventure. Its Intelligent Traction Management system allows you to choose from Normal, Snow, Mud and Sand driving mods. However, serious adventure seekers will need the Grand Cherokee’s enhanced off-road capabilities. Aside from its higher ground clearance, the Grand Cherokee offers far more rugged upgrades. Jeep specifically engineered the Grand Cherokee Trailhawk for the rough backcountry. Some of its highlights include a low-range 4WD system, an adjustable air suspension, underbody shields, and hill descent control.

In the past, Honda was known for developing some of the most reliable automobiles on the market. However, this popular automaker’s reputation for dependability isn’t as solid as before. In J.D. Power’s annual dependability study, the Honda Pilot only received a 2.5 out of 5.0 rating. On the other hand, J.D. Power gives the Grand Cherokee a 3.0 out of 5.0 rating in long-term reliability. Remember, these SUVs have a similar warranty package.

Folks love the 2019 Honda Pilot’s drivability. Although the Pilot features an automatic stop-start system for enhanced fuel efficiency, it doesn’t impact the Pilot’s smooth performance. While the 2019 Grand Cherokee inspires confidence, don’t expect it to match the Pilot’s easygoing nature.

Drivers rave about the Pilot’s responsive handling. It maneuvers far better than most three-row SUVs. Even on back roads, the Pilot feels composed. A heavier design hurts the Grand Cherokee’s handling around corners. However, expect the Grand Cherokee SRT and the Grand Cherokee Trackhawk to feel extremely stable. These high-performance models come equipped with sports-tuned suspension dampers and a specialized AWD system for enhanced road handling.

The 2019 Jeep Grand Cherokee rides well. Families will enjoy taking it on road trips. However, it does not feel as plush as the Honda Pilot. Because of the Pilot’s supreme ride comfort, you can compare it to an actual luxury SUV. Only the biggest bumps seem to upset the Pilot’s ride quality.

On the inside, the Grand Cherokee keeps things quiet. Sound-reducing glass and active noise-cancellation technology come standard on the luxurious Grand Cherokee Summit. Families will also appreciate the Honda Pilot’s quiet cabin. There’s not much tire and wind noise present.

Whether you choose the Grand Cherokee or the Pilot, you’ll have a good driving position. These SUVs also provide comfortable seating. Even on extended highway trips, occupants will feel relaxed. In regard to outward visibility, the Grand Cherokee and the Honda Pilot both provide a fairly good view of the road.

While the three-row Pilot can seat up to eight people, the two-row Grand Cherokee has a five-passenger seating capacity. This means the Pilot is a better choice for big families. In terms of passenger room, there’s not a huge difference between these SUVs. They offer a similar amount of legroom in the front and rear. However, don’t expect the Pilot’s third row to provide a lot of leg space.

The Grand Cherokee’s versatile cargo area adds to its practicality. It provides more than 36 cubic feet of storage space. There’s just over 16 cubic feet of cargo space behind the Pilot’s third row. Luckily, you can fold down the Pilot's third row to create a larger cargo hold.

Only the Honda Pilot offers CabinTalk. This system is designed to amplify the driver’s voice when talking to passengers sitting in the back. When using CabinTalk, parents will have a much easier time communicating with their kids.

While most of the Grand Cherokee’s crash ratings are favorable, the IIHS only gave this SUV a “Marginal” rating in the driver-side small overlap front test. Its standard headlights also received a “Poor” rating. Top Safety Pick credentials from the IIHS give the Pilot an edge over the Grand Cherokee. In the organization’s driver-side small overlap front test, the Pilot received an “Acceptable” rating.

Of these two SUVs, only the 2019 Honda Pilot comes standard with an accident-avoidance package. Honda Sensing equips the Pilot with automatic panic braking, lane keeping, and intelligent cruise control. Road Departure Mitigation is also included in the package, which helps prevent drivers from veering off the paved road surface. This feature is not offered on the Grand Cherokee.

Like the Pilot, the Grand Cherokee offers a blind-spot monitoring system. This feature gives drivers a greater sense of awareness on multi-lane roads and in parking areas. If the system detects a vehicle in the driver’s blind spot, it will trigger a warning. As expected, a backup camera is standard.

The 2019 Grand Cherokee is a safer vehicle for traveling off-road. It offers hill ascent and descent control. These features control throttle and braking for a more secure drive on rough terrain.

You can also take advantage of the Grand Cherokee’s optional self-parking system. It works for parallel and perpendicular parking. This upgrade is especially beneficial in crowded places.

Some of the Pilot’s standard equipment includes a 5.0-inch display, Bluetooth support, and a seven-speaker sound system. Pilot buyers will also benefit from the Pilot’s standard LED headlights. While the Grand Cherokee doesn’t come standard with LED headlights, it does feature a far more rewarding infotainment system. Jeep equips the base Grand Cherokee with a 7.0-inch touchscreen, which includes Apple CarPlay and Android Auto smartphone connectivity. Niceties, like keyless entry and rear parking sensors, are also standard on the Grand Cherokee.

There are plenty of premium features inside the Pilot Elite. While a Wi-Fi hotspot enables passengers to connect to the web, a rear entertainment system with a 10.2-inch display helps keep kids happy. Other goodies include ventilated seats, a 10-speaker sound system, and wireless charging.

Let’s look back at the biggest categories. The 2019 Honda Pilot packs enough performance to be considered an enjoyable family vehicle. While the V6-powered Grand Cherokee doesn’t accelerate quite as quickly, most people won’t have any complaints. To experience pure driving excitement, go for either the Grand Cherokee SRT or the Grand Cherokee Trackhawk. These high-powered models offer the performance of a genuine muscle truck. A racy exhaust sound adds to the fun of these exciting SUVs.

Drivers who like to go off-roading should pick the Grand Cherokee as their next SUV. It is built for adventure seekers, especially the tough-nosed Grand Cherokee Trailhawk.

When it comes to overall passenger comfort, these SUVs are a very close match. However, the Honda Pilot can seat more people. Upgrades, like heated and ventilated leather seats, are available for both models. Expect the Grand Cherokee Summit to have a very luxurious feel.

The Honda Pilot is an attractive SUV. However, it shares many styling cues with the Honda Odyssey minivan. Many people will consider the Jeep Grand Cherokee to be a cooler-looking SUV. While the Trailhawk model has a rugged persona, sleeker bodywork and large-bore exhaust tips help give the high-performance models an especially sporty look.

At the end of the day, the 2019 Honda Pilot proves to be a practical choice. However, improved reliability has made the 2019 Jeep Grand Cherokee just as rewarding. Remember, getting the Grand Cherokee with a V8 engine results in much lower fuel economy.

Save Money on a 2019 Jeep Grand Cherokee:
Are you Shopping for a New Vehicle? Find the Best Deals with "Free - No Hassle" Prices Quotes.