2017 Nissan Sentra Pros vs Cons. Should You Buy? 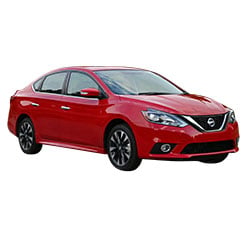 Should You Buy a 2017 Nissan Sentra? Here Are Some Reasons For and Against

The Nissan Sentra’s long-term reliability and affordable price tag have helped it to remain one of the most popular small sedans on the market. A roomy backseat makes the Sentra a great option for the drivers who must accommodate their family. An impressive number of safety features are now offered.

This year, Nissan has introduced a new SR Turbo model, which rewards drivers with an enhanced level of performance. Every driver can take advantage of the cabin’s larger center console. In an effort to reduce wind noise, Nissan also installed thicker glass.

If you have been searching for a fuel-sipper, the 2017 Nissan Sentra remains a good choice. When equipped with the manual transmission, you can look forward to getting 27 mpg in the city and 35 mpg on the highway. Nissan’s innovative Xtronic CVT further improves fuel efficiency. Expect to get an impressive 29 mpg in town and 37 mpg on the open road.

As usual, the 2017 Nissan Sentra is expected to be one of the most dependable cars in its class. You are unlikely to experience any major mechanical problems. Even after five years of ownership, your Sentra should still perform like new. Furthermore, all new Sentra models come with a 60,000-mile powertrain warranty.

The Nissan Sentra is very easy on the wallet. Prices for the base S model start at around $17,000. Meanwhile, the performance-oriented SR Turbo model is priced at $22,000. All versions of the new Sentra bring a great deal of value to the table. It is also very inexpensive to maintain.

With 188 horsepower on tap, the new SR Turbo model promises to offer a more exciting driving experience than the standard Sentra. Aside from its turbocharged engine, the Sentra SR Turbo also benefits from a sports-tuned suspension and a quicker steering system. Luckily, you will still be able to obtain up to 32 mpg.

The new 2017 Nissan Sentra looks just as stylish as any other car in its class. A V-Motion grill helps give the Sentra a signature appearance. Featuring a racy body kit and 17-inch sport wheels, the SR model will appeal to a lot of younger drivers. LED headlamps are available as well. Some of the lively paint colors include Deep Blue, Cayenne Red, and Aspen White.

Although the Sentra is considered to be a small sedan, it rivals the passenger room of a midsize sedan. All of your family members will be able to travel in comfort. The amount of rear-seat legroom is outstanding. Even tall drivers can easily fit behind the wheel. There is also more than 15 cubic feet of cargo space in the trunk.

During an emergency situation on the road, the Sentra’s well-designed braking system will help you to avoid a crash. Even the standard drum brakes provide above-average stopping power. However, the available disc brakes are even stronger. Because of its effective braking system, the Sentra is highly recommended for young and inexperienced drivers.

Some of today’s newest vehicle feature technologies that are quite complicated to use. Fortunately, that is not the case with the 2017 Nissan Sentra. The NissanConnect infotainment system is especially easy to navigate. A simple menu allows you to quickly locate your favorite apps. Adjusting the climate control system is a breeze.

The 2017 Nissan Sentra offers safety technologies that give you an extra sense of awareness on the road. Blind-spot monitoring is a major help for the drivers who do a lot of commuting on the interstate. If you are in danger of crashing into the rear of another vehicle, automatic braking technology can bring the Sentra to a halt. Adaptive cruise control and rear cross-traffic alert are offered as well.

Although the standard four-speaker sound system will get the job done, serious music fans will find the Bose audio system to be a must-have feature. You will definitely grow to appreciate the enhanced sound quality.

Reasons Not to Buy a 2017 Nissan Sentra – The Cons

If you stick with the base engine, don’t expect the Sentra to offer a thrilling performance. A slow 0-60 time of 10.1 seconds puts it behind the pack. If you crave more excitement, the SR Turbo model will prove to be a worthy upgrade.

All versions of the 2017 Nissan Sentra come with a front-wheel-drive system. This could pose a problem for the drivers who experience heavy snowfall during the winter. Keep in mind that small sedans such as the Subaru Impreza offer all-wheel drive.

Unlike some of its key rivals, the Nissan Sentra was unable to obtain a five-star overall safety rating. Although the Sentra provides good impact protection, vehicles such as the Honda Civic scored even better.

By adding a new turbocharged SR trim to the lineup, Nissan was able to transform the Sentra into a more fun-to-drive car. The availability of a six-speed manual transmission will excite a lot of car enthusiasts. Nevertheless, most drivers will find the standard engine to offer enough pep for everyday commuting. The 2017 Nissan Sentra is perfect for the families who want to save some extra cash without sacrificing quality.