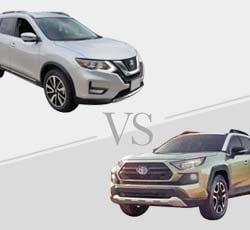 The Nissan Rogue and the Toyota RAV4 are both vehicles that appeal to many drivers. They're practical and reliable while being sporty and stylish, and they have ample cargo room in the back for storage. Offering versatility, they can come as 4WD models, and the back seats can be lowered to maximize space and let you carry larger items. There are a few differences between the two; below you'll read more about those differences so that you can decide which one might work better for you.

The 2019 Rogue runs on a 2.5-liter engine. It has continuously variable valve timing for better efficiency, and it achieves a total of 170 horsepower and 175 pound-feet of torque. The engine is paired with an Xtronic continuously variable transmission that can make adjustments on the go. This means you'll have power when you need to accelerate and a smooth ride when you're just cruising.

If you prefer to cut down on gas consumption, the Rogue Hybrid can get up to 35 mpg on the highway and 33 mpg in the city. This is in comparison to 26/33 (city/highway) mpg that the standard Rogue gets. The hybrid engine is a 2.0-liter, four-cylinder engine that gets 176 horsepower when you factor in the power generated by the electric motor. Torque is a respectable 144 pound-feet, so you probably won't notice any change in power.

All-wheel drive is available on Nissan's SUV. It would be a good idea to take advantage of this option if you might be traveling in adverse conditions. Since the system makes automatic adjustments, the wheels that need the most power will get it sent to them immediately. If the roads aren't that bad, your front wheels will receive the power so that you can maintain a high efficiency.

Additional features on the Rogue include four-wheel vented disc brakes and an anti-lock system so things don't freeze up. Further smoothing out the deceleration is Intelligent Engine Brake, which applies engine braking to help prevent those sudden, jerky stops. Active Ride Control and Intelligent Trace Control can be appreciated when you're going over bumpy roads and around curves.

In terms of power, the RAV4 is definitely the winner in this matchup. The non-hybrid RAV4s have a 203-horsepower engine under the hood with 184 pound-feet of torque. While the Rogue has continuously variable valve timing, the Toyota counterpart has dual variable valve timing and dual injection. Most people wouldn't know the difference as they drive around town; it basically comes down to a different design with the same intention of increasing efficiency.

This leads to greater towing capacity in the RAV4, as you might imagine from these stats. The standard RAV4 can pull 1,500 pounds, and the hybrid is even more powerful with a towing capacity of 1,750 pounds. In contrast, the Nissan can only tow a maximum of 1,102 pounds. Thinking that their drivers might be using trailers, Toyota included a Trailer Sway Package on this vehicle.

The RAV4 also has features that help the driver without him or her even knowing sometimes. There are power-assisted ventilated brakes and anti-lock brakes that play an important role when you have to hit the brakes hard. There is also Hill Start Assist Control and Active Cornering Assist in addition to different drive modes to take advantage of.

When considering the standard RAV4 versus the standard Rogue, the fuel economy is fairly similar. The RAV4 gets either 26/35 (city/highway) mpg or 27/34 mpg depending on whether you have front-wheel or all-wheel drive. The contrast in efficiency is more evident with the hybrid versions. The hybrid Toyota SUV can go much further on a single tank of gas. Its combined mpg is 40, which is an enviable number for anyone who really wants to be eco-conscious.

Both models have their base features, like manually-adjustable front seats and back seats that can fold down. The higher trims on the Rogue have eight-way power driver's seats, four-way power front passenger's seats, and leather seats. The same can be found on the RAV4, with the exception that there are many different levels of fabrics and interior features. With Toyota, you could get Softex-trimmed heated front seats, ventilated front seats, heated back seats, and different styles of stitching.

Cargo capacity is 39.3 cubic feet or 70 cubic feet in the Rogue, depending on whether the back seats are up or down, and this is nearly equal to the respective 37.6 and 69.8 cubic feet of cargo space in the Toyota. With either option, you'll have the room you need for most situations. Opt for the roof rack if you plan on lugging around a lot of equipment every now and then.

For people who love staying connected, both vehicles have many perks. The Nissan comes with smartphone integration through either Apple CarPlay or Android Auto, and everything can be accessed through the seven-inch touchscreen. Bluetooth can be set up for pairing so that calls can be hands-free. There's even a hands-free text messaging system that lets you use voice controls. Integrated navigation is available if you want an easy way to get directions that will take into account traffic and construction detours.

The Toyota is also compatible with Apple CarPlay, but rather than offering Android Auto, the company chose to go with Amazon Alexa. The seven-inch touchscreen feels similar to that in the Nissan. Since there is Bluetooth as well on the RAV4, you can stay hands-free. There are additional options that include turning your vehicle into a Wi-Fi hotspot and using the Scout GPS Link navigation system. The higher trims on the RAV4 come with significantly better audio options, giving you a more immersive sound experience.

Both the Rogue and the RAV4, built as vehicles for the modern driver, come with driver assist features. These can come in handy as an extra pair of eyes, keeping you more aware of your surroundings while you're on the highway, parking, or anywhere on the roads.

The Rogue has a blind spot warning system that will let you know if another vehicle is in that spot just behind and off to your side. Intelligent Lane Intervention is a system that keeps you in your lane, and the SUV can automatically engage the brakes if it seems like you're about to hit a pedestrian. Rear Automatic Braking is only available on the SL, but Rear Cross Traffic Alert is present on all trims.

The Blind-Spot Monitoring System on the Toyota comes with Rear Cross Traffic Alert, but it's not standard on all trims. It is, though, an option on even the basic trims. The RAV4s all come with the Toyota Safety Sense 2.0 system. It's a comprehensive package that includes several features.

The Pre-Collision System with Pedestrian Detection is intended to prevent head-on accidents with people walking in the road. Lane Departure Alert with Steering Assist will let you know if you're starting to veer out of your lane, and it can correct your steering in a gentle manner. Lane Tracing Assist can be used to keep you centered, which can give you peace of mind in busy city traffic.

Other parts of Toyota Safety Sense 2.0 are Automatic High Beams, Road Sign Assist, and Dynamic Cruise Control. This cruise control system adjusts to changing traffic patterns rather than focusing on a single speed to maintain. It can monitor the distance between you and the vehicle in front of you so that you'll automatically slow down when appropriate. It's a much more practical system given the volume of drivers we see on the highways these days.

As you would expect, the standard suite of airbags is included on each of the vehicles. The Rogue has front, side-impact, knee, and roof-mounted airbags, and the same can be said for the RAV4. In addition, all the positions on both vehicles have three-point seatbelts. The bodies are built with certain areas that are designed to absorb impact and keep energy away from the passengers.

Starting MSRP on the 2019 Rogue is $25,020. Upgrading to the SV, SV Hybrid, SL, and SL Hybrid would put you back $26,440, $27,700, $31,490, and $31,640, respectively. Even with all the bells and whistles, the Nissan Rogue is relatively affordable. It's also nice that the hybrid versions are not that much more expensive than the non-hybrid trims. Over time, you could end up saving money going with the hybrid by making fewer trips to the gas station.

There are four other trims that are above $33,000 at their starting price. They may be worth it if you want premium materials inside and outside your car and are willing to pay a bit more.

The Adventure starts at $33,050, the XSE Hybrid starts at $33,850, the Limited starts at $33,650, and the Limited Hybrid is at the top at $35,850. As the saying goes, you get what you pay for. The Adventure comes with Dynamic Torque Vectoring All-Wheel Drive so you'll be ready for a much wider range of situations. The XSE Hybrid has a sport-tuned suspension and available panoramic glass roof. The Limited includes a digital rearview mirror and has an available bird's eye view camera, and it's hybrid twin rides on 18-inch, five-spoke super chrome-finished alloy wheels.

Starting with the XSE Hybrid, the infotainment system is run through a larger eight-inch screen that seems more impressive. Plus, the seats and trim quality are just that much better the farther up you go.

Overall, you can see that the two SUVs offer similar values. For those who like the high-end finishes, the RAV4 will likely win. It's the only one of the pair that gives you the opportunity to go all-out on things like trim, technology, and the audio system.

The 2019 Nissan Rogue and 2019 Toyota RAV4 are pretty neck and neck in many categories. At the base level, there might not be much difference, considering the sizes of the two are almost identical. There are, though, some variations in terms of power and capability even at the lower trims. The more noticeable comparisons are found on the higher trims of the RAV4, so Toyota's SUV comes out on top when you take that into account. Anyone who wants something more than standard should take a longer look at the RAV4, but at the same time, be prepared to spend a little more.