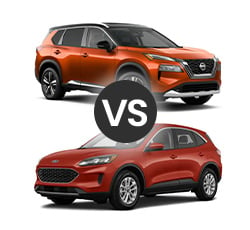 Compact crossovers are more appealing than ever. The redesigned 2021 Nissan Rogue has become a big hit. It offers improved driving dynamics and a greater number of premium features. Another popular pick is the 2021 Ford Escape, which offers one of the most powerful engines in the class. Let’s find out which one of these SUVs stands out in the most categories.

All versions of the 2021 Nissan Rogue receive the same powertrain. Last’s year’s four-cylinder engine has been revised to produce 181 horsepower, which is 11 horsepower more than before. Torque has also slightly increased to 181 lb-ft. A continuous variable transmission continues to feed power to the wheels.

While their base engines have a similar output, the Rogue’s engine is more refined. However, some car reviewers have noticed that the Rogue’s transmission produces a loud drone when accelerating hard. Road tests show the new Rogue clocks a 0-60 mph time of 8.1 seconds. When equipped with its base engine, the Escape can accelerate to 60 mph in 8.0 seconds.

Drivers who desire more fun on their daily commute will want the Escape’s turbo four-cylinder engine. It certainly elevates the SUV’s fun factor. A 0-60 mph time of 6.9 seconds enables the more powerful Escape to easily outperform the Rogue. The only bad side is that the Escape's transmission may hunt for gears at times.

Folks who need to pull trailers and small boats will be happier with the Escape. It’s designed to tow up to 3,500 pounds. By comparison, the Rogue has a much lower tow rating of 1,350 pounds.

When it comes to fuel economy, these SUVs prove to be a close match. Front-wheel-drive versions of the Rogue can return an EPA-calculated 27 mpg town/35 mpg highway. Meanwhile, Escape owners can anticipate getting up to 28 mpg town/34 mpg freeway. Choosing the Escape’s range-topping engine noticeably lowers fuel economy to 23 mpg town/31 mpg freeway. While the Escape’s engines can use regular unleaded gas, premium fuel is required for peak performance.

The redesigned Rogue’s road handling has improved dramatically. A new multi-link rear suspension gives the SUV a more athletic feel. While the Rogue still doesn’t stand among the segment’s sportiest models, it definitely inspires drivers with greater confidence. Soccer moms and dads will have no complaints about the Rogue’s maneuverability.

Expect the Escape to be just a bit more engaging to drive. Balanced handling and light steering give the Escape a lively character. Although the Escape is no longer offered with a sports-tuned suspension, it still performs well on curvy roads. In many ways, the Escape drives more like a modern hatchback as opposed to a conventional SUV.

Both SUVs come standard with front-wheel drive. However, an AWD system is available for drivers who need more grip in the snow. Neither vehicle is an exceptional off-road performer. While drivers will be able to take their family on a weekend camping trip, they will need to avoid extremely rugged trails. Adventurous upgrades, such as heavy-duty undercarriage protection and off-road shocks, are not offered.

In terms of braking, the Ford Escape takes around 128 feet to come to a complete stop from 60 mph. However, Escape models equipped with AWD have a shorter braking distance of 123 feet. Expect the Nissan Rogue to stop especially quickly. During 60-0 mph braking tests, this SUV came to a halt in only 114 feet. Because of the Rogue’s extremely effective braking system, drivers will have greater confidence during panic situations.

The new Rogue is a dependable family vehicle. It scores a 4.0 out of 5.0 rating in reliability, which is above average. Owners shouldn’t have to spend a lot of time at the repair shop. However, car shoppers will notice that the Escape has an even more stellar reliability rating of 4.5. Both of these SUVs receive a 60,000-mile powertrain warranty. They also come with a bumper-to-bumper warranty that lasts for 36,000 miles.

The 2021 Nissan Rogue prioritizes family comfort over pure driving excitement. Its new suspension promotes a smooth, quiet ride. Bumps are rarely felt when encountering rough pavement. While the Escape’s ride quality is not quite as impressive, it’s not too far behind. Both of these SUVs are great long-distance cruisers.

When designing the new Rogue, Nissan focused on creating a quiet atmosphere for passengers. Engine and road noise have definitely been reduced. Everyone can look forward to enjoying a peaceful trip. The Escape also has a remarkably hushed interior. This is especially true for a crossover SUV that starts at less than $25,000.

Like the Nissan Rogue, the Ford Escape is built to hold up to five people. While the Escape virtually matches the Rogue in total passenger space, there’s noticeably more legroom in the Rogue’s backseat. This extra space will especially benefit taller family members. Both of these crossovers provide a sufficient amount of legroom in the front.

The Rogue has some of the most comfy seats in the segment. Nissan’s signature Zero Gravity seats are designed to provide continuous support thorough the day. While the Escape’s seats are good, some testers have complained about a lack of cushioning. Sliding and reclining rear seats are found in both vehicles. However, heated rear seats are exclusively offered on the Rogue.

Although the Escape may provide a tad more cargo space, Nissan’s Divide-N-Hide storage system gives families a place to secure their extra gear. Both the Rogue and the Escape offer a a hands-free power liftgate.

The new Rogue receives a NissanConnect touchscreen with advanced smartphone support. While the standard 8.0-inch touchscreen offers hassle-free operation, the optional 9.0-inch HD touchscreen has especially sharp graphics. Wireless Apple CarPlay is found on the range-topping Platinum trim. For the first time, a digital gauge cluster is available for the Rogue.

Folks who choose the base Escape will get stuck with a basic 4.2-inch infotainment display, which is among the smallest in the class. Buyers must pay extra for Ford’s SYNC 3 infotainment system. It brings a nicer 8.0-inch touchscreen. The unit’s responsiveness makes it a joy to use. Drivers can also easily adjust the climate and audio settings using conventional knobs. A digital gauge cluster is optional.

Both of these top-selling models offer a head-up display. This feature helps drivers to remain more focused on the road. Because speed and other key info will be directly in their line of sight, they won’t have to look down as often.

The latest Rogue receives a decent, four-star overall safety rating from the federal government. According to the NHTSA’s crash tests, its frontal impact protection is not as good. On the other hand, this SUV aced every crash test performed by the IIHS.

Few competitions can match the Escape’s level of crash protection. It recorded a five-star rating in all the NHTSA’s major impact tests. The Escape also managed to be named an IIHS Top Safety Pick. However, this vehicle’s headlights don’t illuminate the road as well.

Like the rest of the segment, the 2021 Nissan Rogue and the 2021 Ford Escape come standard with an advanced safety package. Automatic emergency braking, active lane control, and blind-spot warning are all found on the Escape. Aside from these helpful safety features, the Rogue adds standard reverse automatic braking and driver attention monitoring.

Among the Rogue’s exclusive safety features is Nissan’s ProPilot Assist system. Not only does this nifty system help keep drivers centered in their lane, but it also maintains a safe following distance. ProPilot Assist is even advanced enough to reduce your speed when approaching curves. The goal is to promote a less stressful commute.

Only the Ford Escape offers a self-parking system. It automatically steers the SUV into parallel and perpendicular parking spots. The system is especially beneficial for drivers who spend a lot of time in the city.

Nissan lists the redesigned Rogue with a starting MSRP of $25,650. Meanwhile, prices for the entry-level Escape begin at $24,900. Keep in mind that these SUVs have an identical warranty.

While the entry-level Escape S may have a lower starting price, the base Rogue S comes loaded with a few more key features. A big highlight is the base Rogue’s far more modern infotainment system. Satellite radio also comes standard on the Rogue.

These are two of the country’s most popular compact SUVs. They both are highly recommended family haulers. However, which vehicle is the better option?

Nissan truly transformed the new Rogue into an eye-catching crossover. Slimmer LED headlights and a larger V-Motion grille help the Rogue’s front fascia to command attention. However, some people will also like the Escape’s sporty design.

The Escape provides enough passenger room for the typical American family. However, more premium interior materials give the Rogue the edge in overall interior quality. You also can’t beat the comfort of Nissan’s Zero Gravity seats. Both these SUVs have a high predicted reliability rating and a rewarding number of standard safety technologies.

It’s a close call between these evenly matched SUVs. Both have some endearing qualities. The 2021 Ford Escape offers more driving fun. However, opting for the Escape’s turbo engine does result in a lower fuel economy rating. On the other hand, families will love the Rogue’s exceptional comfort. Nissan has also taken the new Rogue's interior quality to the next stage.

Save Money on a 2021 Nissan Rogue:
Are you Shopping for a New Vehicle? Find the Best Deals with "Free - No Hassle" Prices Quotes.