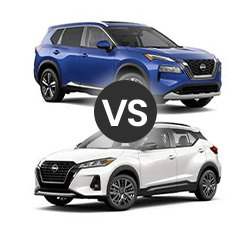 2022 Rogue vs Kicks - How Do They Stack Up? What are the differences?

The Nissan Rogue and Nissan Kicks are fairly well-equipped two-row SUVs. Since they're made by the same company, they have a similar feel to them, both on their exterior and interior. The Rogue is the larger and more powerful vehicle, but it's also more expensive. Which would be better? This overview will highlight their differences so that prospective customers can narrow down their options.

This all makes a big difference when it comes to how big the cabin feels. When looking at passenger volume, it's clear that there's quite the discrepancy. The Kicks has 92.6 cubic feet of passenger volume, while the Rogue has 105.4 cubic feet of passenger volume. The Rogue is pretty comfortable, with its rear-seat passengers having 38.5 inches of leg room. In contrast, second-row leg room in the Kicks is only 33.5 inches. Most would agree that the back row of this model is fairly snug and not ideal for taller riders.

The Kicks should have enough cargo space for some buyers, but certainly some of them will have to look elsewhere. That's because the maximum cargo capacity of the Kicks is only 32.3 cubic feet. When the rear seats are upright as opposed to folded down, the cargo volume is 25.3 cubic feet. The Rogue, on the other hand, has 36.5 cubic feet of cargo space when its rear seats are upright and 74.1 cubic feet of cargo volume when those seats have been lowered. This is more than twice the capacity of the Kicks.

When looking at these vehicles from the outside, some similarities pop out. Both have angular frames and a modern feel. The Kicks can ride on 16-inch or 17-inch wheels, and the Rogue can have wheels that measure 17, 18, or 19 inches. Nissan has given these SUVs aluminum-alloy wheels.

More contrasts are apparent in other areas of the vehicles. For instance, the Kicks comes standard with halogen headlights and only its upper trims have LED headlights and LED daytime running lights. The Rogue automatically gets to have those types of LED lights, and it has LED taillights, too. LED fog lights are optional in both models.

Further, the larger SUV offers more optional exterior features. Some of the notable ones are a power liftgate or a motion-activated liftgate, which can be opened in a hands-free manner. The Rogue's side mirrors can be heated and enhanced with LED turn signals and a reverse tilt-down function, whereas the Kicks only offers heated mirrors.

Plus, a dual panel panoramic moonroof is only available with the Nissan Rogue. This is automatically integrated into the two out of the four total Rogue trims, and it's an available upgrade in another trim. This moonroof can be nice to have and can make an impact in how open the cabin feels.

Some SUVs come with multiple powertrain options, but the Rogue and Kicks only offer one engine option. Things are very straightforward for customers, as there aren't any enhanced powertrains or hybrid ones to choose from.

Under the hood of the Kicks, there's a 1.6-liter, four-cylinder engine. The Rogue has something of a similar size, as it runs on a 1.5-liter, three-cylinder engine. Though it's fairly small, this 1.5-liter engine benefits from having a turbocharger. As a result, it can make 201 horsepower and 225 pound-feet of torque. This is much more than the 122 horsepower and 114 pound-feet of torque that the Kicks can put out. In the area of performance, the bottom line is that the Rogue is going to feel far superior to the Kicks.

Both engines work together with an Xtronic continuously variable transmission. However, the Rogue gets to have a manual mode, along with paddle shifters. Some people may find these paddle shifters fun to use. The electronic shifter and Eco and Sport modes in the Rogue also help it stand apart from the more basic Kicks.

Another significant way in which these models differ has to do with their drivetrain(s). The Kicks is stuck with front-wheel drive, which would be perfectly fine for many drivers who hardly ever have to deal with extreme conditions. The Rogue can either have front-wheel or all-wheel drive. When power is sent to all four wheels, the SUV can exhibit much better handling. Rogue trims with all-wheel drive have the addition of Snow and Off-Road driving modes, so they're much more ideal for anyone who may have to face snowy or otherwise slippery roads and trails.

The Nissan Rogue has a few extra enhancements. While the Kicks has a front stabilizer bar, the Rogue has stabilizer bars in the front and rear. The Kicks has a torsion beam rear suspension, which could be seen as lower quality than the Rogue's independent multi-link rear suspension. Finally, the Kicks has regular electric power steering; this doesn't match up with the vehicle-speed-sensitive electric power steering found in its larger counterpart. These extras can all contribute to the driving experience, and overall, the Rogue is more smooth, powerful, and agile.

The lowest trim of the Rogue has a few of the same features that the Kicks has. For example, they have manually adjustable front seats and cloth seats. At this level, the climate control system is manually adjusted. It's great that the Kicks and Rogue come standard with push button ignition. Their higher trims have a smart key entry system, which is called Nissan Intelligent Key. The Rogue also has remote engine start as a standard component on many of its models.

When looking at the other Rogue trims in comparison with the Kicks lineup, more differences are apparent. The higher Rogue trims have either dual-zone or tri-zone automatic climate control. It can have an auto-dimming rearview mirror, too. The Kicks doesn't have the option to get that kind of mirror, and while it can have automatic temperature control, this system only has one zone.

The seats can be more upscale in the Rogue as well. Several trims come with eight-way power-adjustable driver's seats that have power lumbar support, and they can have four-way power-adjustable front-passenger's seats. The driver's seat can even be equipped with a system that memorizes a preferred position. At the same time, the memory function works for the side mirrors.

In the first Rogue trim, there are cloth seats, as previously mentioned. The second trim can have cloth or leatherette, the next one has leather, and the last one has quilted semi-aniline leather seats. Heated front seats and a leather-wrapped steering wheel are seen in many Rogue models, with some even having heated rear seats and heated steering wheels.

Leather is not an option with the Kicks. It can typically have either cloth or sport cloth seats, and there's also an option to upgrade the highest trim with Prima-Tex upholstery. Prima-Tex and sport cloth seats are accented with orange stitching, so they feel a little more youthful and edgy. This design complements the standard metallic accents in the cabin. The highest trim of the Kicks does come with a leather-wrapped steering wheel and can be upgraded, for an additional cost, with a heated steering wheel and heated front seats. Heated rear seats aren't available.

Technology is a field in which Nissan has concentrated a lot of its efforts. Customers can take advantage of many recent advancements that make so many things much easier and more convenient. Both Nissan SUVs showcase fairly sizable touchscreens, along with Bluetooth, Apple CarPlay, and Android Auto.

The Kicks starts off with six speakers and a seven-inch touchscreen. For an extra cost, its top trim can be upgraded with a Wi-Fi hotspot and a Bose sound system that has eight speakers. SiriusXM becomes standard at the mid-level trim, as do an eight-inch touchscreen and a seven-inch digital instrument cluster. Three USB-A ports are standard, which is really great. The top two trims get an additional USB-C port.

Offering a slightly more comprehensive technology package, the Rogue starts off with an eight-inch touchscreen. A nine-inch touchscreen with integrated navigation is standard with the top trim and available on the second highest one. The base Rogue only has four speakers, though. Mid-level trims have six speakers, and the top trim is equipped with a Bose premium audio package that has a dual-driver woofer.

Interestingly, the Rogue's base trim doesn't have as many standard USB ports as the Kicks does. It only has one USB-A and one USB-C port. Higher trims get to have a pair of each, with wireless charging being available. Something else to note is that the entire Rogue lineup has SiriusXM, and a few trims have Wi-Fi connectivity.

Nissan has made a point of integrating advanced driver-assist technologies into many of its models. With the Kicks, a number of systems are standard. They include forward collision warning and pedestrian detection, as well as automatic emergency braking and rear automatic braking. The vehicle can warn drivers about vehicles in their blind spots and vehicles crossing behind them, and it can alert people when they're veering out of their lanes. Automatic high beams and a rear sonar system are standard, and an all-around monitor is included with the highest trim. Plus, the top two trims have Intelligent Driver Alertness, so they can prompt drivers to focus on the road when it seems like they're distracted.

Everything found in the safety package of the Kicks has been integrated into the Rogue. The Rogue then takes things a step further. Its base trim have Intelligent Trace Control, so it can make small adjustments to braking to assist with cornering.

Rather than having a regular cruise control program, the higher trims of the Rogue all have intelligent cruise control. If they have navigation, then this program can take navigation data into account when adjusting speed. In addition, these trims can correct steering to keep them in their proper positions, thanks to a system called Intelligent Lane Intervention. They also have Intelligent Blind Spot Intervention. They can further have Traffic Sign Recognition, an all-around monitor, and sonar detectors that are placed on the front, rear, and sides of the vehicle.

Though there are some things that these models have in common, they are definitely distinct from each other. The Rogue has considerably more space and capability than the Kicks does, so if either of these factors is important to a prospective buyer, then the Rogue would be the more strategic option. This is especially true if anyone prefers to have all-wheel drive.

It's important to keep budget in mind, though. The Kicks has a very affordable starting price that's just under $20,000. The mid-level trim costs nearly $22,000, and the top trim is about $22,500. In a stark contrast, the base trim of the Rogue costs a bit more than $27,000. The next trim is nearly two thousands dollars more than that, with the SL trim costing $33,500 and the Platinum topping things off with an expensive price tag of approximately $37,000.

The Kicks is going to be much more practical for those who don't have big budgets. As long as they're happy with the size of its cabin, it should be a solid pick. Considering its cost, it has excellent technology and safety features. Many customers are specifically looking for advanced equipment like what the Kicks has.

However, the Rogue has even more high-tech components. Some may really want to drive an SUV with navigation, and in this case, the Rogue would have to be the one to select.