2014 Toyota Avalon Pros vs Cons. Should You Buy? 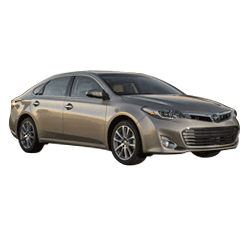 Are you in search for a new Sedan? Toyota’s 2014 Avalon may be the one that you are looking for. The Avalon was redesigned for the 2013 model and has very few changes for the 2014 model. The resulting rework has produced a more modern coachwork design that leaves behind the boring boxy appearance of earlier Avalon models. The amenities of past Avalon’s, however, are carried over to this new design. Moreover, the new body style first catches ones attention and says look at me. Up until now, the Avalon has been Toyota’s big comfortable oddball, that blended in and screamed mediocrity. That is no longer so. [ For the 2015 model see - Toyota Avalon Pros and Cons ]

Features such as a spacious comfortable cabin, and Toyota’s venerable reputation for reliability remain a part of the mix. The lines of the new Avalon are sleek and more aggressive in appearance than former models and stand out in a crowd. The Avalon finally has better looks than the smaller Camry and gives consumers, especially Toyota aficionados, a definitive reason to buy an Avalon instead. Amenities abound across all four trim levels.

The 2014 Avalon has improved handling and performance over the pre 2013 models. Few additions have been added in for the 2014 model year over the 2013 Avalon. The 2013 model was a total redesign and every aspect of the car was addressed except for the badge. The handling is firmer, and more controlled than on previous renditions, with a luxuriously and well-appointed cabin and great looks.

Competition in this segment includes the Chevrolet Impala, Chrysler 300, as well as the Honda Accord. Gas mileage on these car models are similar with both the Avalon coming in at 21/31 mpg and Accord coming in at 21/34 mpg. The Chevrolet Impala and the Chrysler 300 do not fare as well in this comparison, although they are both Flex Fuel adapted, which the Avalon and Accord are not. All but the Impala have heated and cooled seats as standard equipment. Only the Avalon offers Toyota’s world-renowned dependability and longevity.

The Avalon is powered by a 3.5 liter V-6 connecting the front wheels to the ground through a shift able 6–speed automatic transmission. It puts out 268 hp @ 6200 rpm. In addition, 0-60 can be attained in 6.7 seconds, which is quick for a 5-passenger sedan. Handling was addressed in the 2013 do over, which has produced a stiffer ride that may be a turn off for previous owners of the Avalon. Handling and braking are balanced and firm and traction and stability control are standard features.
Styling:

The new styling of the Avalon is sleek and aggressive. The rounding of the body and sloping hood is a departure from pre 2013 model years. The grille gives a big toothy grin that says let’s go play. When sitting in the cockpit of this newly designed for 2014 model of Toyota’s flagship sedan, you will appreciate a capacity that offers space and comfort for five passengers, although due to the bodylines it is not as roomy as previous Avalon’s. Having admired Avalon’s for years, the new body style and enhancements in this model are appreciated.

The Avalon is available in five trim levels. The base level is the XLE, which is unavailable with a sunroof, and then adds the XLE Premium, XLE Touring and the Limited. All models have many standard features. There is also an Avalon Hybrid powered by a four-cylinder engine and an electric motor. This model boasts a mpg of 40/39, which is remarkable for a car large sedan and has pricing that is comparable to the standard Avalon.

Toyota hit a home run when they redesigned the Avalon for 2013 and enhanced 2014’s model. Now it is an automobile stands out amongst the crowd instead of blending in, as it often has in the past. Many people were not aware that Toyota made a full size sedan and are much more familiar with the Toyota Camry and Toyota Corolla. With this revamp, Toyota has made a place for itself amongst the large familiar sedans. Such as the Chevrolet Impala, and Chrysler 300, while maintaining Toyota’s reputation as a car that will still be on the road, long after the competition has been retired.

Whether the Avalon is on your list when considering the purchase of a new sedan, it is worth more than a second look. A test drive at your local dealer and a cost comparison of the competition will let you know whether it is the right new car to put in your driveway. Comparably it holds its own with many of the offerings in today’s large sedan market, in pricing and amenities.