2014 Toyota Corolla Pros vs Cons. Should You Buy? 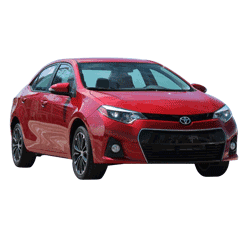 Toyota Corolla has a stellar reputation to maintain. It has been known for its incomparable reliability and safety features since its introduction into the American car market in the sixties. Toyota exceeds all other car manufacturers in building exceptionally dependable and reliable vehicles that appeal to consumers who prefer simplicity and economy. The 2014 Toyota Corolla is no exception to this well-deserved reputation. The Toyota Corolla is recognized for its high sales volume around the world. The 2014 version of this popular car with global appeal has been completely redesigned to meet changing consumer tastes and demands.

Ten Reasons to Purchase a New 2014 Toyota Corolla - the Pros

1. The simplicity and dependability of the four-cylinder engine and four-speed or six-speed transmission provide the consumer with an exceptionally competent compact car that drives easily and responds well.

3. The quiet engine runs smoothly and quietly. It features a manual transmission that is easy to shift or the consumer has the option to purchase an automatic one that makes driving even easier. Because of new technology, the 1.8 liter engine is about five percent more efficient with up to 140 HP.

5. A comprehensive entertainment package that features AM/FM stereo radio with convenient audio controls located on the steering wheel, an automatic equalizer and six speakers provide the driver with audio options that rival much more expensive vehicles. Drivers now have the ability to exert more control over live radio programs. It is possible to pause a program and replay it later because of its HD radio capability. Bluetooth connectivity gives the driver the ability to use a cell phone in a hands-free manner.

6. Use of the latest improved technology provides increased fuel economy. It is estimated that the 2014 Corolla will deliver fuel economy ratings of approximately 29 MPG for city driving and 38 MPG for highway driving.

7. The exterior now features new lines and angles that add to its new design concept. The sharper details and sleeker styling adds to its appeal for drivers of all ages, but especially for younger ones who are attracted to its sportier look. Three new exterior colors give buyers more choice of selection. The front and rear bumpers and the door handles are all painted the same color as the body, which gives the car the more luxurious look of a more expensive car.

9. A tire pressure sensing system keeps the driver informed about the status of the tires. One of the most valuable safety features is the energy-absorbing steering column, which comes standard on the 2014 Toyota Corolla.

10. Even though this vehicle is equipped with many exclusive features, the purchase price is affordable for most budgets. The base price begins around $16,000, while the sportier models, with additional options, list for as much as $22,000. The 2014 Toyota Corolla is priced less than the Honda Civic and has an excellent resale value.


Reasons for Not Buying a 2014 Toyota Corolla - the Cons

1. Many drivers complain that the limited amount of horsepower contributes to its slow acceleration in traffic situations. This could present a safety issue.

2. The 1.8 liter engine works better for city driving, but does not perform as well on the highway.

3. Engine noise increases around 40 MPH and passing is difficult at any speed.

The Corolla continues to change the image sometimes associated with small cars. This simple four-door compact sedan has added impressive exterior and interior styling that rivals much more expensive cars without increasing the price structure. With the 2014 models, Toyota introduces the beginning of the eleventh generation of this affordable, compact car.

This 2014 model embodies several new aerodynamic and mechanical improvements that complement its sleek dynamic design and contribute to it improved mileage rating. New emphasis has been placed on providing a slightly more sloping roofline and a much shorter, improved rear deck that adds a sportier look. The 2014 Toyota Corolla is the first compact car to offer more effective LED lights as a standard feature. Three new exterior colors have been added to give consumers more choice. The inclusion of eight strategically-placed airbags provide an added measure of safety.

The 2014 Toyota Corolla is changing the way buyers view small cars. Its popularity continues to grow because of the manufacturer's attention to detail, reliability and increased fuel economy capability. Its redesign has given it elevated status among all compact cars. Upgraded styling, new sleeker, aerodynamic exterior design and much more functional interior make it an extremely popular best seller. Owners of older Toyota Corollas are as excited about the positive new features of this compact sedan as younger drivers who have never owned one. Even though buyers may choose the 2014 Toyota Corolla for its fuel economy, many are impressed with its improved performance and sporty appearance.

• 2018 Toyota Corolla trim levels. What you get with each trim configuration.