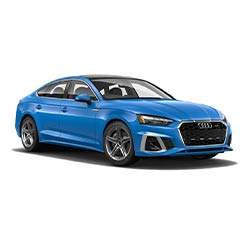 Audi A5 Pricing for the Premium, Premium Plus and Prestige Trims

Price Tip:
To find the best possible price on a new Audi A5, shop prices online first. Get up front pricing before you walk into a dealership. We recommend the following free services; Car Clearance Deals,   Edmunds,   NADAguides,   Motortrend  &   CarsDirect
These services will offer you the lowest prices and supply you with multiple competing price quotes. You will know the best price before you visit the dealer.
How to Calculate The Dealer Cost of an Audi A5:

The Audi A5 is a stunning model that's available as a coupe, a convertible, or a four-door sportback. Either way, the car has a sporty feel and an elegant style. It's powered by a turbocharged engine, so it's quick and lively. It should be able to please a lot of people who have discerning tastes.

As mentioned, there are a few different options for the Audi A5. The Sportback is a four-door car with a gently sloping roofline in the rear. It kind of straddles the line between hatchback and sedan. It very much feels like a sedan, except it has some added cargo height in the back.

The Coupe and Convertible both have accommodations for four people instead of five. They also only have two doors. This may make them more appealing to some buyers, while others might not feel that they have enough interior space. They only offer about 33 inches of rear-seat leg room, so it's certainly a valid point. In contrast, the Sportback has about 35 inches of second-row leg room.

All three styles of Audi A5 run on the same type of engine. It's a turbocharged engine with four cylinders and a displacement of two liters. It works together with a mild hybrid system that provides a little more energy. The system can make up to 261 horsepower and 273 pound-feet of torque.

It's important to note that the Sportback is capable of generating that kind of power if the 45 TFSI version has been selected. There's also a 40 TFSI version. It uses the same type of engine, but it's only able to deliver 201 horsepower and 236 pound-feet of torque.

All-wheel drive is standard, giving the Audi A5 better traction. All-wheel drive can be useful in slippery conditions, of course, and it can also be used when cornering or accelerating. It makes adjustments on its own as needed, so the driver never has to decide when to engage it or not.

Suspension and steering are both perfectly tuned, it seems. This car handles itself well, even at high speeds, and it's a true pleasure to drive.

Beyond deciding what type of A5 model to get, customers will have to decide on a specific trim. The different levels are Premium, Premium Plus, and Prestige.

The Premium is pretty well-equipped for being the first one in the lineup. For instance, it has modern LED headlights and automatic high beams, as well as LED taillights with dynamic turn signals that can really attract a lot of attention. It features a beautiful panoramic sunroof and treats passengers to a three-zone automatic climate control system, LED interior lighting, and leather upholstery. Plus, it has numerous driver-assist technologies, smartphone compatibility, and a seven-inch digital display behind its steering wheel.

Technology on the Premium Plus trim is even more impressive. Instead of only having a rearview camera, the Premium Plus has a 360-degree camera system that provides a complete top-down view of the vehicle. Further, this trim has adaptive cruise control with active lane assist; this program allows the Audi to adjust its speed to keep itself a safe distance away from other vehicles, and it gives the car the ability to correct steering so that it can stay centered in a lane. Other enhancements include a virtual cockpit and matrix-design LED headlights.

The last trim is the Prestige. It takes things a step further with built-in navigation and a Bang & Olufsen sound system. It provides the driver with a head-up display, which projects key information onto the windshield in the driver's line of sight. The headlights not only have a matrix design, but they can also project animations on walls when the vehicle is in park. This is a fun feature that has a benefit of preventing the headlights from shining too brightly in confined spaces. While riding in a Prestige, people up front can enjoy heated and ventilated front seats and can take advantage of the wireless charging system.

There's a lot to think about with the 2022 Audi A5. Fortunately, there doesn't seem to be a wrong answer for the question of which model or trim is best. Every version of the A5 has its own advantages. A refined cabin, an athletic exterior, and advanced technology can be found across the lineup.

Note: All Audi A5 MSRP, invoice and dealer cost dollar figures above are subject to change without notice.