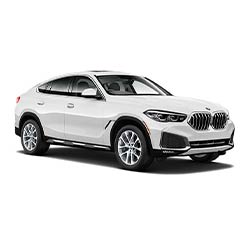 BMW is known for building sporty vehicles that are sophisticated and fun to drive. The 2021 BMW X6 fits that description perfectly. As a luxury crossover, it has the versatility that many people need, and it can come with a few different powertrains, all of which are quite impressive. As one would expect from a vehicle of this caliber, there are plenty of high-end amenities inside the cabin.

There are a few things that have been changed as BMW transitions the X6 to the 2021 model year. Perhaps most notable is that Android Auto has become a standard feature. For whatever reason, BMW has been a bit late to the game in this regard, but Android users will no longer feel left out. Unfortunately, some advanced features, such as night vision and a rear-seat entertainment system, have been taken away. Under the hood, a major change is that some models of the X6 are now equipped with a mild-hybrid system. With the higher-end version of the X6, there is now a remote start function.

The first two run on three-liter, six-cylinder engines. These engines are TwinPower Turbo versions that can churn out 335 horsepower and over 330 pound-feet of torque. As mentioned above, they get a boost from a mild-hybrid system. This engine has been paired with an eight-speed automatic transmission that has a manual shift mode that can be used to add to the excitement level.

The difference between the two trims is that the xDrive has all-wheel drive and the sDrive has rear-wheel drive. All-wheel drive enhances traction, not only in snowy and icy conditions but also on dry surfaces. This is especially true when the X6 is traveling at higher speeds and drivers want to maintain stability while going around curves in the road or highway. If the extra traction isn't necessary, the rear-wheel drivetrain should definitely keep people satisfied, as it's a high-quality system that matches well with the powerful engine.

With an X6 40i model, people can take their vehicles from zero to 60 in a little over five seconds. If this isn't fast enough for certain consumers, there's always the M50i. This high-end trim can hit the 60-mph mark in about four seconds, which is a significant improvement over the other trims.

The reason the M50i can hit such speeds so quickly is because it uses a much larger 4.4-liter V8. It's also a TwinPower Turbo engine like what's found in the other X6s, and this one is really incredible. It packs a punch with more than 520 horsepower and 550 pound-feet of torque. All-wheel drive is standard on the M50i, and the car also has a premium exhaust system along with a special suspension, brakes, and differential. The result of having all of these components is a truly memorable driving experience.

As a crossover, the X6 has a somewhat unique shape. BMW calls it a "Sports Activity Coupe." This basically means that it has a roof that slopes slightly down as it hits the tail-end of the vehicle. This design does give the vehicle a somewhat futuristic look and an aerodynamic shape. Of course, the X6 has the iconic BMW front grille as well as a muscular frame and athletic stance.

Leg room in the back seat is about 36 inches. This is enough room to accommodate adults, but it's not the most spacious area. Behind the seats is a fairly large cargo area. It has a volume of about 27 cubic feet. Since there is some height to the cargo space and the rear seats can fold down, the cargo area can be expanded by quite a bit when necessary.

As one would imagine, the inside of the cabin is filled with luxury materials. The seats are trimmed with Vernasca Leather, the dashboard has been made using a synthetic leather, and there are various accent pieces that add to the upscale aesthetic of the X6. A panoramic moonroof is standard, and available in the front are 20-way power-adjustable seats.

On every 2021 BMW X6, there is a 12.3-inch touchscreen. People can enjoy using this large screen to do everything from reading text messages and playing music to accessing certain apps and getting directions through the navigation program. Since the infotainment system has Apple CarPlay and Android Auto technology, it's simple to connect one's phone to the vehicle. Wireless charging and Wi-Fi connectivity are convenient to have, and if anyone really loves their music, there's the opportunity to upgrade to a Harman Kardon audio system or an even nicer Bowers & Wilkins system.

It should be clear by now that the 2021 BMW X6 is a premium model. It's been made for consumers who have sophisticated tastes and want their next vehicles to perform extremely well.

How to Calculate The Dealer Cost of a BMW X6:

Note: All BMW X6 MSRP, invoice and dealer cost dollar figures above are approximate amounts. Prices are subject to change without notice.