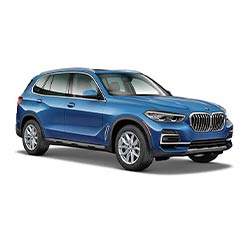 Price Tip:
To find the best possible price on a new BMW X5, shop prices online first. Get up front pricing before you walk into a dealership. We recommend the following free services; Car Clearance Deals,   Edmunds,   NADAguides,   Motortrend  &   CarsDirect
These services will offer you the lowest prices and supply you with multiple competing price quotes. You will know the best price before you visit the dealer.
How to Calculate The Dealer Cost of a BMW X5:

The BMW X5 is what the company calls a Sports Activity Vehicle. In other words, it's an SUV. It has a good size to it, with space for a third rows of seats. That being said, most models only have two rows of seats, allowing room for plenty of cargo. This model comes in several trims, all of which are powerful and athletic. They have a nice amount of technology as well as high-end cabin amenities.

A limited edition of the X5 is newly available this year. It's the Black Vermilion model, and it looks really stunning with a glass gear shifter, red accents on its grille, red M sport brake calipers, and black leather seats with red piping. It's only available in very limited quantities, so anyone interested in it should be ready to reserve one.

In other news, Sparking Brown Metallic and Dravit Gray Metallic are additions to the list of exterior color choices. Plus, the glass shift knob found in the Black Vermilion X5 is optional on other trims as well.

There are three engine options for the X5. The X5 sDrive40i and xDrive40i both run on 3.0-liter TwinPower Turbo six-cylinder engines. These are quite capable, as they can make 335 horsepower and 331 pound-feet of torque. The difference between the sDrive40i and the xDrive40i is that the xDrive40i has all-wheel drive. Both types have eight-speed automatic transmissions with paddle shifters and sport mode.

The xDrive45e is a bit more powerful, and it has another huge benefit since it's a plug-in hybrid. It uses the same type of engine as the lower trims, but since it has a battery and electric motor, it's able to generate 389 horsepower and 443 pound-feet of torque.

The top two trims are in part of BMW's M lineup. As such, they're quite powerful. The M50i uses a 4.4-liter TwinPower Turbo V8 engine that can make 523 horsepower and 553 pound-feet of torque. The X5 M uses that same engine, but this trim is specially engineered so that it can create up to 600 horsepower.

The X5 has a center touchscreen that measures 12.3 inches, and it comes with enhanced Bluetooth, Apple CarPlay and Android Auto. As part of the Connected Package, it offers real-time traffic information, parking information for select cities, BMW remote services, and navigation. Using the Personal Assistant feature, drivers can use their voice to ask the infotainment system to perform certain tasks.

Another 12.3-inch screen is included with the X5, and that's where the Live Cockpit Professional technology can be utilized. This screen shows important vehicle information such as speed, range, and any safety alerts.

Speaking of safety, the X5 has an impressive amount of technologies that can protect passengers. In case of emergency, the BMW Assist eCall system can be engaged and emergency services will be requested. When a collision seems imminent, the BMW can automatically close its windows and moonroof. After an impact, post-crash braking would be activated, the doors would be unlocked, and the interior lights and hazard lights would turn on.

Hopefully, none of that ever needs to occur, though. The X5 can actively work to prevent collisions from happening. It does so by monitoring its performance and its position, relative to other objects and any lane markings. If the vehicle drifts out of a lane or approaches another vehicle too quickly, for instance, the driver would be warned and the vehicle could take corrective measures.

This model has a relatively large cabin, with nearly 40 inches of front-row leg room and more than 37 inches of second-row leg room. As mentioned earlier, a third row can be squeezed in the back. When the rear seats have been lowered, maximum cargo capacity is a little more than 72 cubic feet.

The base trims have SensaTec, a synthetic leather, on their seats and dashboards. They have a high-gloss wood trim around the cabin, power-adjustable steering wheels, heated and power-adjustable front seats, and a memory function for the driver's seat. In addition, they have ambient lighting, multiple storage compartments, and multi-zone climate control, all of which are so convenient to have. The standard panoramic moonroof adds a lot to the sophistication level of the X5. It consists of two glass pieces, with the front one being able to slide and tilt open.

Higher trims have leather seats and aluminum or carbon fiber interior trim. On the X5 M, the dashboard is wrapped in leather instead of synthetic leather. The seats can move in up to 20 ways with additional adjustments for shoulder and thigh support. Ventilated front seats, a heated steering wheel, and heated rear seats are available, too.

Note: All BMW X5 MSRP, invoice and dealer cost dollar figures above are subject to change without notice.