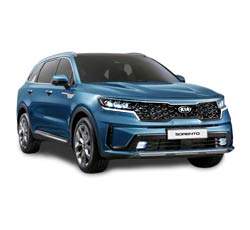 Price Tip:
To find the best possible price on a new Kia Sorento, shop prices online first. Get up front pricing before you walk into a dealership. We recommend the following free services; Car Clearance Deals,   Edmunds,   NADAguides,   Motortrend  &   CarsDirect
These services will offer you the lowest prices and supply you with multiple competing price quotes. You will know the best price before you visit the dealer.

How to Calculate The Dealer Cost of a Kia Sorento

The Kia Sorento is a solid option if anyone is thinking about getting a three-row SUV. Even though it has space for up to seven passengers, it doesn't feel that bulky. Rather, it seems athletic and fairly nimble. Kia makes several trims of the Sorento, and it offers a hybrid and a plug-in hybrid as well.

For the most part, the Sorento has remained unchanged. However, the plug-in hybrid is new for this year. This is part of Kia's push to bring more electrified vehicles into its lineup.

There are actually a lot of options to consider, which some consumers might appreciate. The first two are standard powertrains, and in addition to the plug-in hybrid version, there's a regular hybrid.

The first three trims, which are the LX, S, and X-Line S AWD, use 2.5-liter engines. This engine does well, producing 191 horsepower and 181 pound-feet of torque. It's been paired with an eight-speed automatic transmission.

The other non-hybrids benefit from having turbocharged engines and eight-speed dual-clutch transmissions. One of these engines has a displacement of 2.5 liters as well, but the turbocharger makes it considerably more efficient and capable. A turbo model comes with 281 horsepower and 311 pound-feet of torque. These are excellent numbers that many will appreciate. The trims that have the turbo engine are the EX, X-Line EX AWD, SX, SX Prestige, and X-Line SX Prestige AWD.

There are two trims of the Sorento Hybrid, the S and the EX. They both use 1.6-liter turbocharged engines and electric motors, and they have six-speed automatic transmissions. Combined horsepower is 227, and combined torque is 258 pound-feet. These numbers are more than respectable.

Then, there's the new plug-in hybrid to consider. It comes in the SX and SX Prestige trims. The plug-in hybrid also uses a 1.6-liter turbocharged engine, like the hybrid does. Its electric system is more robust, so it has a net horsepower of 261.

Regarding charging, things are very convenient. It can be charged in less than three and a half hours. The all-electric range is 32 miles, which is ideal for many commuters. When the electric charge runs out, the gas-powered engine can kick in, so it's not a problem.

Nearly all trims of the Kia Sorento come with a 10.25-inch touchscreen. The exception is the base non-hybrid trim, which is the LX. It uses an eight-inch touchscreen. Even with that slightly smaller touchscreen, there would be Android Auto, Apple CarPlay, and Bluetooth. The larger touchscreen is equipped with navigation, voice recognition, and SiriusXM Satellite Radio. Having all of these programs can make it very simple to look up directions, access certain apps, keep in touch with others, and stay entertained.

It's also great that Kia has designed the Sorento with mobile devices in mind. The base trim has three USB outlets in the front row, two more in the third row, and one in the middle row. All of the other trims have two additional charging outlets for second-row passengers, and some of them offer wireless charging as well.

Technology and safety go hand-in-hand these days. All trims of the Sorento have at least a handful of driver-assist systems, including lane keeping assist, pedestrian detection, and forward collision warning with emergency braking.

The middle row can either have a bench seat or a set of captain's chairs. With the bench, the Sorento can fit three in that row. There are only two captain's chairs, but the tradeoff is that the cabin feels more open with this configuration.

When the third-row seats are in their upright position, there is a small cargo area that's available. It has a volume of 12.6 cubic feet, which is comparable to the trunk size of many sedans. It's easy to fold down that rear seat when not necessary, and this would expand cargo capacity to 45 cubic feet. Total cargo capacity when both rear rows are lowered is 75.5 cubic feet.

While most trims have SynTex upholstery on their seats, the lowest trim has cloth seats and the higher ones feature genuine leather. Most trims have power-adjustable driver's seats with lumbar support, too. Some of the available amenities are heated and ventilated front seats and heated rear seats.

The Kia Sorento gives customers many options, all of which are set up with advanced technology and comfortable cabins.

Note: All Kia Sorento MSRP, invoice and dealer cost dollar figures above are subject to change without notice.