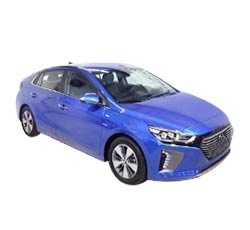 Price Tip:
To find the best possible price on a new Hyundai Ioniq 5, shop prices online first. Get up front pricing before you walk into a dealership. We recommend the following free services; Car Clearance Deals,   Edmunds,   NADAguides,   Motortrend  &   CarsDirect
These services will offer you the lowest prices and supply you with multiple competing price quotes. You will know the best price before you visit the dealer.

How to Calculate The Dealer Cost of a Hyundai Ioniq 5

If anyone is interested in an efficient vehicle and prefers something compact and affordable, the 2022 Hyundai Ioniq could be an ideal choice. It's actually available as either a hybrid or a plug-in hybrid. This gives it very broad appeal to those who are committed to reducing their fuel consumption. It used to come as an all-electric version, but for 2022, Hyundai has removed that as an option.

The hybrid and plug-in hybrid versions of the Ioniq run on 1.6-liter engines, and they have electric motors to supply them with additional power. Total horsepower is 139, and front-wheel drive is standard.

Hyundai has given these cars a six-speed dual-clutch transmission, which is something that is typically seen in sportier vehicles. Perhaps this can help the Ioniq feel a bit more athletic. It's not hard to figure out that the Ioniq isn't that powerful. There's a manual option for shifting, through the SHIFTRONIC feature, that some drivers might want to take advantage of at times. Paddle shifters are found on the higher trims of the Ioniq hybrid, but not the plug-in hybrid.

Another feature that the Ioniq has is drive mode select. Sport mode can make things a little bit more exciting, and Eco mode optimizes efficiency over performance.

The plug-in hybrid has a combined MPG of 52, but when the electric motor is factored in, it has MPGe of 119. It switches seamlessly between hybrid and all-electric mode, so drivers don't have to worry about fiddling with any switches or keeping track of anything special.

To charge the plug-in hybrid, it just has to be plugged into an outlet. Using a regular 120-volt outlet, it takes a little more than six and a half hours to achieve a full charge. If a 240-volt outlet is used, that charging time reduces to two hours and fifteen minutes. This is obviously a big reduction, so people may want to consider having 240-volt outlets installed in their homes. Fortunately, this is a pretty common project that electricians can easily help with.

Every Hyundai Ioniq has a touchscreen, Android Auto, Apple CarPlay, and Bluetooth. As a nice bonus, SiriusXM is found on many trims, and many people appreciate this because it significantly expands entertainment options. Most of the trims have eight-inch touchscreens, while the top trims of the hybrid and plug-in hybrid versions have 10.25-inch touchscreens equipped with navigation.

Each Ioniq trim has at least two USB ports. Wireless charging is available. In addition, a Harman Kardon sound system is optional. It comes with eight speakers, one of which is a subwoofer.

The Ioniq is appointed with all kinds of driver-assist technologies. This allows it to take on an active role in keeping people out of harm's way. With its various sensors and monitors, it knows when a problem seems imminent. It can then warn the driver and can potentially correct the situation.

Even the base trims have great safety packages. They can keep themselves centered in their lanes, thanks to lane keeping assist, and they can sense and prevent forward collisions with vehicles or pedestrians. With driver attention warning, these cars can warn drivers when they should be focusing more on the roads. Automatic high beams and smart cruise control are other standard components.

Mid-level trims are set up with blind-spot and rear cross-traffic alert. They also have parking distance warning systems to prevent minor collisions when making maneuvers.

The Ioniq is classified as a compact car, but it still has a decent amount of space. The hybrid and plug-in hybrid versions have the same dimensions with 35.7 inches of rear-seat leg room. With a full cabin, things may start to feel a little cramped on longer road trips.

The base trims feature dual-zone climate control systems to keep everyone comfortable. They have premium cloth seats that are soft and supportive, and the proximity key entry system with push button start is nice to have. Mid-level trims can be upgraded with power-adjustable driver's seats and heated front seats. On the higher end of the lineup, the Ioniq can have a power sunroof and leather seats that really elevate its style. Plus, it can feature a memory system for the driver's seat.

The Ioniq might not be as flashy as some other hybrids or plug-in hybrids, but it's still a solid choice. Thanks to its extremely efficient powertrain, it can help customers save gas. The Ioniq is reasonably priced and comes with several high-tech components, so most would be pleased with its offerings.

Note: All Hyundai Ioniq 5 MSRP, invoice and dealer cost dollar figures above are subject to change without notice.