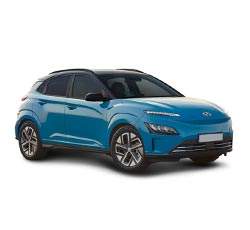 Hyundai Kona Electric Pricing for the SEL and Limited Trims

Price Tip:
To find the best possible price on a new Hyundai Kona Electric, shop prices online first. Get up front pricing before you walk into a dealership. We recommend the following free services; Car Clearance Deals,   Edmunds,   NADAguides,   Motortrend  &   CarsDirect
These services will offer you the lowest prices and supply you with multiple competing price quotes. You will know the best price before you visit the dealer.

How to Calculate The Dealer Cost of a Hyundai Kona Electric

As an all-electric SUV, the Kona Electric would be an interesting choice for those who would like to reduce their carbon footprints. It has good range, high-tech systems, and a comfortable cabin. The Kona Electric looks and feels modern, a quality that's exactly what many consumers are looking for.

How the Kona Electric Runs

Unlike plug-in hybrids, the Kona Electric is a 100% electric vehicle. It doesn't require any gasoline, and as such, it doesn't require typical maintenance such as oil changes or transmission fluid maintenance. It doesn't emit any tailpipe emissions either, which is great news for those concerned about the environmental impacts of driving.

Instead of a combustion engine, the Kona Electric has an electric motor and a lithium-ion polymer battery. The industry has really made a lot of advancements in recent years, and modern electric vehicles can be very powerful. The Kona Electric has an impressive 201 horsepower and 291 pound-feet of torque. It feels agile and athletic, and it's quick to accelerate.

With this model, power is sent to the front wheels only. This may be concerning to those who prefer having all-wheel drive for its enhanced traction.

People who don't have experience with electric vehicles may be wondering about how they can be charged. There really isn't anything to worry about; charging is straightforward ad fairly simple.

It takes a little more than nine hours to get a full charge using a standard, Level II charging system. Level II charging works with 220/240-volt outlets. If one isn't currently available in a residence, it can be installed. Nine hours may seem like a long time, but usually, electric-vehicle owners charge their batteries overnight. This typically doesn't impact their schedules too much.

Public charging stations with Level III, 50kW equipment can charge the Kona Electric more quickly. The battery can go from a capacity of 10% to 80% in approximately an hour. Level III, 100kW equipment can cut that time down to 47 minutes. If someone is simply stopping by a place where there's a quick charging system, then he or she doesn't need to stay until a full charge is finished. These public stations are great for filling up just a bit and extending the range.

With a full charge, the range of the Hyundai Kona Electric is 258 miles. This should give Kona Electric customers some peace of mind. During regular weeks where commutes may be twenty minutes or so each way, this range is more than enough to last several days.

The Kona Electric is fairly compact, but it's versatile, too. It has 33.4 inches of leg room in its back seat. This isn't going to provide that much space for adult passengers, but it should be sufficient for many households.

In the rear of the vehicle, the dedicated cargo area has a volume of just under 20 cubic feet. Lowering the rear seats down will expand cargo capacity to 45.8 cubic feet.

There are only two trims of the Kona Electric. The first is the SEL, and the premium choice is called the Limited.

With the SEL, there are many attractive features. It comes standard with an eight-inch touchscreen, SiriusXM and HD Radio, and smartphone connectivity. Behind the steering wheel, there's a 10.25-inch digital instrument cluster. Proximity key entry and push button start are both convenient to have.

Available on the SEL are a number of higher-end components. They include the Hyundai Digital Key program, wireless charging, and heated front seats, along with a power-adjustable driver's seat. With Hyundai Digital Key, a smartphone can be set up to act as a key fob. It's great for when someone doesn't want to carry keys with them or when letting a friend borrow the vehicle for a short time.

All of those elements just mentioned as being available on the SEL are standard on the Limited. Plus, the Limited has ventilation in its front seats as well as leather upholstery. The level of sophistication in this top trim is definitely noticeable.

Instead of an eight-inch touchscreen, the Limited has a 10.25-inch touchscreen. With this larger screen comes navigation. Navigation is so useful when trying to find new places and figure out how to get around any congestion.

The Limited has also been enhanced with some other high-tech systems, such as dynamic voice recognition and a Harman Kardon premium sound system.

The Limited has a program called smart cruise control, and it's an advanced type of cruise control. It can not only maintain a set speed but can also adjust speed if the leading vehicle has slowed down or subsequently sped up.

The Kona Electric is a vehicle that shows the industry what's in store in the future. It's efficient and comfortable, and most importantly, it handles itself well. With all of its features, it should receive a lot of attention from those interested in electric SUVs.

Note: All Hyundai Kona Electric MSRP, invoice and dealer cost dollar figures above are subject to change without notice.