2017 Ford Fusion Energi Pros vs Cons. Should You Buy? 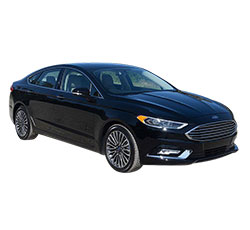 Should You Buy a 2017 Ford Fusion Energi? Here Are Some Reasons For and Against

The 2017 Ford Fusion Energi is Ford’s affordable midsize hybrid plug-in sedan. The Fusion Energi does a good job filling its niche in the market, but how does this Energi model compare to other similar plug-in cars? Buyers looking for a chargeable sedan that’s also affordable certainly will find many reasons to consider the Fusion Energi.

The 2017 Ford Fusion Energi has added a better automatic parking system that can handle 90-degree parking and an adaptive cruise control that can cope with slow stop-and-go traffic. It also adds the SYNC 3 Infotainment system to the dash with an 8-inch touchscreen.

The 2017 Ford Fusion Energi’s 2-liter engine and electric motor combine for a total of 188 horsepower, which compares favorably to the Chevrolet Volt’s 149 horsepower. Because its power comes partly from the electric motor, the Energi accelerates from a stand-still quickly and the continuously variable transmission makes a smooth ride in stop and go traffic.

If you aren’t looking for a sporty car, the Fusion Energi certainly provides a comfortable ride with smooth suspension and power steering. It can also take a turn without much body lean required. The transmission doesn't cause jolts and is unnoticeable when transitioning from electric to hybrid.

The interior is sure to impress for the price for this model. The touchscreen controls make physical buttons obsolete and gives the dash a modern look. The basic model avoids hard plastics, and the platinum trim includes leather seats and dash.

Parent will appreciate that the 2017 Ford Fusion Energi’s rear seat is wide enough to fit three child seats and includes two sets of LATCH anchors on the outboard seats.

This car is equipped with the fantastic SYNC 3 system that functions like a smart phone touchscreen with intuitive swipe and gesture input and virtual buttons. Android Auto and Apple CarPlay come with the system, so you are able to plug your smart phone into the SYNC 3 and interact with your apps on its display.

6. Commute to Work and Charge

The Fusion Energi is designed to function like an electric vehicle for the first 20 miles. That means if you have a commute within that range, and a charge station at your destination, you can go completely electric with the reassurance that you can switch to the hybrid mode when it's needed.

7. An Electric Vehicle That Can Go on Road Trips

The 2017 Ford Fusion Energi has an electric-only option, but the hybrid engine can take over at any point. This makes the Fusion Energi a vehicle that can be used like an electric plug-in vehicle for commuting, yet capable of a road trips up to 600 miles.

Ford tweaked the exterior of the Fusion Energi to make it more attractive than before. The grille is sleeker and the headlights got a new shape. A chrome strip connects the tail lights in the back. Overall, the Fusion Energi maintains the look of the Ford Fusion.

Like other vehicles in its category, the 2017 Ford Fusion Energi can qualify for sizable rebates and incentives from Federal and State governments looking to make the car market greener. This makes switching from a traditional Fusion to the Energi version a good deal.

Reasons Not to Buy a 2017 Ford Fusion Energi – The Cons

1. Fuel Economy is Not the Best

The Fusion Energi’s gas mileage doesn’t match that of its competitors at 43/41 mpg. It might be forgiven since it delivers more power than the Volt, but the Sonata packs more horsepower and better gas mileage. If fuel economy is a major factor in your decision making, the Fusion is not the best in its niche.

The Fusion Energi can’t match the range that competitor models can deliver, going only 21 miles on a single charge. The Volt more than doubles this range. If driving on electric only is important to you, you can find better performance elsewhere.

Hybrids are known to have less room available for cargo because their bulky batteries take up more space than traditional combustion engines. However, the Fusion Energi has less than its competitors at only 8.2 cubic feet, which is about 20% less than other hybrid models in its class.

The 2017 Ford Fusion Energi is a solid midsize sedan, but it doesn’t match the competition as well as it could. Its electric-only range is shorter than other models and as a hybrid vehicle its fuel economy is not as good. It also doesn’t do well in the cargo space department compared to other hybrid electric vehicles on the market. Despite these shortcomings, it’s outfitted with a upscale interior and has heated leather front seats.

The 2017 Ford Fusion Energi may not be the least expensive green vehicle, but it is an affordable option in the hybrid plug-in category. Its price is lower than either the Hyundai Sonata or the Chevrolet Volt. Still, if range is a deal breaker, you may want to choose carefully since the Fusion Energi is more limited than the competition in this measure of performance. If range is not that important, then its other features compare well with the competition and outperform in some cases.