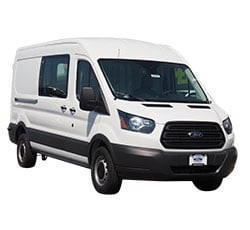 Should You Buy a 2017 Ford Transit 250? Here Are Some Reasons For and Against

If you are looking for a vehicle that fits your work needs, the 2017 Ford Transit 250 is a cargo van that works for you. It's hard to find many negative things to say about the 250, and there are plenty of reasons to test-drive this vehicle, including its vast cargo space and configuration options as well as its great gas mileage.

Significant changes for the 2017 Ford Transit 250 include making the 2016 model's LED cargo lighting package standard for all trims. You also have the option to get heated front seats. Additionally, the 3.7-L V6 engine is now standard for all dual rear-wheel Transits. There are new power-retractable running boards as well.

Although there aren't any hard-and-fast statistics on the 2017's fuel efficiency, based on the 2016's performance, you can expect at least 16 mpg combined from the Transit. The EcoBoost 3.5-L engine generates 310 hp and 400 lb-ft of torque, so, based on the amount of power that is being produced, you might expect slightly better gas mileage on this engine than on some of its competitors.

If you're not a tech-savvy driver, the 2017 Ford Transit 250's infotainment system might be a good option for you. The Sync 3 infotainment system has a user-friendly interface and has a sufficiently-sized 6.5-inch touchscreen monitor. Infotainment options include satellite radio, a USB port, and navigational abilities.

The LED Compartment Lighting Package that was optional on the 2016 is now standard on the 2017 Ford Transit 250. LED lighting is now present throughout the cargo area of all vans, making it easier for you to see when you need the extra light.

5. Options Can Be Ordered Alone

Unlike other newer vehicles, options for the 2017 Ford Transit 250 can be individually ordered. Of course, they can still also be ordered within their respective packages. If you want rear-view parking sensors, you don't have to worry about buying them as part of a package that comes with other features you don't want.

The Transits all have a low step-in height, which makes them easy to get in and out of. You will no longer have to use the rear bumper to step up into the cargo area either since the floor is so low.

All of the controls on the front panel are clearly marked and easy to use. The controls for the Sync 3 interface are also user-friendly, so you won't have to spend time trying to figure out what buttons to push while you're driving.

Get behind the wheel of the 2017 Ford Transit 250, and you'll feel like you're driving a sedan. The Transit handles all kinds of roadways, gets sufficient power from even its standard V6 engine, and makes efficient turns.

There are almost too many interior options to name. You can choose from different seating options, such as charcoal or pewter cloth or vinyl seats. You can also opt for four or six speakers with different audio options.

10. Eight Packages to Choose From

If you're looking to add a package, you might have a difficult time deciding between the eight available packages. These include a smoker's package and the CNG/Propane Fuel Capable Engine Prep Package.

One of the very few flaws with the 2017 Ford Transit 250 is that performance gets a little sluggish when you are constantly transporting heavy cargo. Performance does not seem hindered if you are not frequently lugging heavier items, but if you are, be prepared to feel the lag after a while.

Unfortunately, there is not a V8 engine available for the 2017 Ford Transit 250. While the V6 engine options aren't terrible, the vans would probably perform slightly better on a V8, which you can find in some of the Transit's competitors.

The NV2500 HD Cargo van has an option for a powerful V8 engine, unlike the Transit. This engine gets paired with a 7-speed automatic transmission, so it has get-up-and-go power. However, it does not have as much in the way of customization options as the Transit. It also lacks the cargo space of the extended Transit 250, only getting up to 323 cubic feet of cargo space on its high roof van.

The 2017 Ram Promaster Cargo van has an on-board internet connection, which is a nice innovation that sets it apart from competitors. Still, it lacks the Transit's refined driving performance and is rather uncomfortable for drivers to sit in for extended periods of time.

The 2017 Ford Transit 250, along with all other models for the year, shows a lot of promise. This cargo van is ideal for workers who have to lug a lot of cargo in the rear. The best part about these vans is that they have so many fantastic features that can be added individually or with their respective packages.