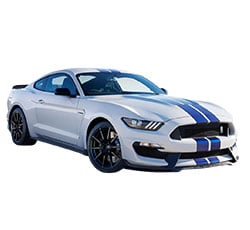 Should You Buy a 2017 Ford Shelby GT350? Here Are Some Reasons For and Against

The 2017 Ford Shelby GT350 is essentially a high-performance version of the Ford Mustang. It is able to outshine sports cars that carry a far more expensive price tag. While the GT350 is a fun street car, it can also be used as a weekend track machine. It is currently among the most sought-after coupes on the market.

This year, more creature comforts are now available for the Shelby GT350. To make the latest model a more attractive option, the popular Track package has been included as a standard feature.

There was a lot of time and effort put into developing the car’s exclusive “Voodoo” engine. It is tuned to push out a stunning 526 horsepower and 429 pound-feet of torque. The engine’s high-RPM design makes it perfect for the track. When launched from a standstill, the 2017 Shelby GT350 can hit 60 mph in about 4.1 seconds.

The new 2017 Shelby GT350 sounds more like a Ferrari opposed to a traditional muscle car. It sounds especially aggressive when punching the accelerator. According to many car enthusiasts, the coupe has one of the best-sounding exhaust notes in the business. The exhaust system has multiple settings. While the quiet setting is great for cruising though your local neighborhood, the Sport mode sounds mesmerizing.

When behind the wheel of the new 2017 Shelby GT350, you will experience the car’s excellent road manners. It handles the road with an unbelievable amount of poise. Unlike last year’s model, the 2017 GT350 comes standard with adaptive suspension dampers. Despite the car’s lowered stance, its ride quality remains remarkably pleasant. You will be able to take a long road trip with no trouble.

In contrast to a tiny sports car, the Ford Shelby GT350 has a comfortable cockpit. It is a good option for tall drivers. You will like the standard Recaro sport seats, which provide extra snugness in fast-paced driving situations. Heated and ventilated front seats are offered as well. If you plan to drive the car on a regular basis, you can make good use of its large trunk.

6) Bargain Price for Its Performance

In the world of fast sports cars, the new Shelby GT350 proves to be a legitimate deal. It has a starting price of around $55,400, which is a great deal for such a high-performance ride. When tested at the track, the powerful coupe was able to outperform expensive sports cars such as the Jaguar F-Type SV-R.

Although the 2017 Ford Shelby GT350 is engineered to excite driving enthusiasts, it still provides nice features. Smartphone integration makes it a worthy daily-driver. Meanwhile, the Track Apps feature can display your 0-60 times and other performance data. Some of the other standard items include a rear-view camera, Bluetooth technology, and key-less ignition.

The Electronics package rewards you even more high-tech goodies. Featuring an 8.0-inch touch-screen display, Ford’s updated Sync 3 infotainment system now benefits from Apple CarPlay and Android Auto. A lot of drivers will appreciate the more powerful, nine-speaker audio system. If you like to travel, the navigation system will keep you on the right course.

Like the regular Mustang, you can expect the 2017 Ford Shelby GT350 to offer great crash protection. During emergency situations on the road, you can rely upon the coupe’s very powerful Brembo braking system. An advanced traction control system also comes standard. With the use of the MyKey system, parents can prevent their teen drivers from speeding.

For good reason, the Ford Shelby GT350 is in very high demand. It is not a mass-produced vehicle, so you will be able to truly stand out on the road. The Ford Shelby GT350 definitely has the potential to be a collectible. A well-kept model will retain a high resale value.

The 2017 Ford Shelby GT350 is not the most efficient sports car on the market. Although its 21-mpg highway fuel economy rating is reasonable, it only returns 14 mpg in the city. However, driving the car at full throttle will cause its fuel tank to empty even faster. By comparison, the regular Mustang GT can return up to 26 mpg on the open road.

Unsurprisingly, the new Shelby GT350 is not a suitable family vehicle. While small children can easily climb into the backseat, most people will not be able to fit comfortably. Its backseat is best used as an extra storage area.

Based on the feedback from dealers nationwide, the 2017 Mustang GT350 remains a hot seller. It only remains on the lot for a short period of time. In order to get a model that has your favorite paint color, you may have to travel to an out-of-town Ford dealership.

The new 2017 Ford Shelby GT350 is a highly recommended sports car. Its thrilling performance and updated standard features make it a strong value. Even the base model will prove to be a good selection. Ford's new Electronics package will likely intrigue a lot of buyers.