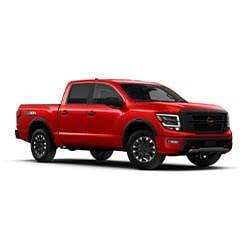 Compare the 2022 Nissan Titan Trim Levels. Comparisons cover the S vs SV vs Pro-4X and Platinum Reserve. What is the difference between them?

When browsing the market for a new full-size truck, don’t forget about the 2022 Nissan Titan. Although the Titan may not rank among the best-selling models in the class, it has a few standout attributes. Not only does this truck feature one of the segment’s most muscular standard engines, but it also comes equipped with Nissan’s extremely pleasant Zero Gravity front seats. Furthermore, few rivals offer a standard 100,000-mile bumper-to-bumper warranty.

Many people are delighted by how well the Titan rides on the street. However, it is also a skilled off-road machine when properly equipped. A decent tow rating adds to this pickup’s versatility.

Just a few updates were made to the 2022 lineup. Nissan now equips the truck with a couple of extra standard features. The Titan also has an updated list of optional packages. Let’s take a look at how the available Titan trims stack up against each other.

Compare the King Cab S vs Crew Cab S. What is the difference?

The least expensive grade is the base Titan King Cab S, which features an extended cab. Like every other trim, it comes equipped with Nissan’s brawny Endurance V8 engine. Total output is an impressive 400 horsepower and 413 lb-ft of torque. Nissan links the engine to a nine-speed automatic transmission. Aside from offering rather quick acceleration, the Titan King Cab S can also tow up to 9,260 lbs with its newly standard trailer hitch.

Rear-wheel drive is standard on the King Cab S trim. However, an optional shift-on-the-fly 4X4 system enhances the truck’s ability to churn through mud and snow. While the rear-wheel-drive model has a government-estimated fuel economy rating of 16 mpg town/21 mpg freeway, opting for the 4X4 system slightly decreases the rating to 15 mpg town/20 mpg freeway.

Although the Titan King Cab S is considered to be the lineup’s budget model, it still comes standard with a good number of high-tech features. Nissan’s straightforward infotainment unit provides a standard 8.0-inch touch display with smartphone connectivity. With the use of Nissan’s hands-free Text Messaging Assistant, drivers can stay in touch with people without being distracted. Bluetooth, a six-speaker stereo with satellite radio, and a 7.0-inch driver information screen also come standard.

Cloth upholstery is found throughout the cabin. Don’t expect the Titan King Cab S to come equipped with power seats. However, Nissan's standard Zero Gravity seats are among the most comfy around. The Titan King Cab S also provides remote keyless entry and a 40/20/40 split-bench front seat. To add to this trim’s value, Nissan now equips it with a spray-on bed liner.

Whether they’re traveling alone or venturing out with their family, drivers will treasure the Titan's standard safety features. A rear-seat reminder system makes sure busy people don't leave behind children and pets. In contrast to virtually every competitor, the Titan provides front and rear automatic braking as standard equipment. Meanwhile, blind-spot sensing makes the truck more secure by notifying the driver of nearby vehicles. Other beneficial safety systems include pedestrian detection, high-beam assist, an integrated backup camera, and lane departure warning.

In regard to exterior styling, the Titan King Cab S won’t get as much attention on the road as the upper trim levels. It 18-inch painted wheels are not as stylish. Nissan also cuts costs by equipping the truck with cheaper halogen headlamps.

Drivers who need room more for passengers should consider stepping up to the Titan Crew Cab. It provides 38.5 inches of rear legroom, which is substantially more space than the King Cab version offers. Families will also appreciate this trim’s four full-size doors. While the Titan Crew Cab S is similarly equipped, it adds cloth seats with vinyl bolsters and automatic headlights.

Compare to the Crew Cab S vs King Cab SV Trim. What is the difference?

Although the Titan King Cab SV isn’t as spacious as the Titan Crew Cab S, it does receive a greater number of premium features. This means drivers can experience more luxury.

Another option is the SV Utility package. It adds a useful Utili-track bed system, which helps drivers to safely secure cargo. An integrated power outlet, in-bed lighting, and a locking tailgate are also included in the package.

Compare the King Cab SV vs Crew Cab SV. What is the difference?

The Titan Crew Cab SV looks similar to the King Cab SV trim. However, it obviously has a more spacious interior. Surprisingly, Nissan does not equip the Titan Crew Cab SV with a standard Convenience package. If buyers would like this package, they must purchase it as an option.

On the bright side, the Titan Crew Cab SV does receive heated outside mirrors as standard equipment. Drivers will be able to easily melt away snow and ice during the winter. Meanwhile, intelligent cruise control makes highway drives more relaxing by automatically adjusting the truck’s speed. LED taillights also come equipped on the Crew Cab SV trim.

Compare the Crew Cab SV vs Pro-4X Trims. What is the difference?

The Nissan Titan Pro-4X is only offered as a crew cab. It’s highly recommended for drivers who need a more capable off-road truck. Nissan equips it with a standard shift-on-the-fly 4X4 system.

In comparison to the other trims, the Titan Pro-4X has a more adventurous look. A radiator skid plate and tow hooks give the truck’s front fascia a rugged appearance. This trim also features quite a few black exterior accents, including a blacked-out grille. Unique wheels further differentiate the Titan Pro-4X.

The rugged Pro-4X trim brings a few additional amenities. Two second-row USB ports enable passengers sitting in the rear to charge their devices. Meanwhile, voice recognition is added to the Nissan Connect infotainment system. When traveling on a wet day, rain-sensing wipers automatically adjust to the intensity of the precipitation. A rear 120-volt power port and a universal garage opener are also on the Titan Pro-4X’s list of standard equipment.

If desired, buyers can opt for a sunroof. Another option is the Pro-4X Utility package. It enhances the truck’s towing abilities by adding a trailer brake controller. Drivers can also take advantage of the front and rear parking sensors. Other aspects of the package include Nissan’s Utili-track cargo system, in-bed lighting, an in-bed power outlet, and a locking tailgate.

Compare the Pro-4X vs Platinum Reserve Trim. What is the difference?

The Titan Platinum Reserve is not as rugged as the Pro-4X trim. However, no other version of the Titan is as luxurious. To give the Platinum Reserve trim a special look, Nissan gives it a two-tone paint scheme. An upgraded set of 20-inch alloy wheels also come standard. Chrome running boards add another luxurious touch. While the auto-dimming outboard mirrors with integrated turn signals don’t enhance the pickup’s styling, they do promote a safer drive.

Upon stepping inside the leather-appointed Platinum Reserve trim, test drivers will immediately notice its more upscale cabin. Not only does the truck’s power tilt-and-telescoping steering wheel help everyone to obtain a great driving position, but it also warms their hands on cold days. Heated/ventilated front seats and heated rear seats take the truck’s luxuriousness to the next level.

To allow music fans to experience a more captivating sound, Nissan equips the Titan Platinum Reserve with a Fender premium audio system. A total of 12 speakers are strategically placed throughout the cabin for optimal performance. Another great feature is Nissan’s Intelligent Around View Monitor camera system. It makes the truck easier to maneuver in crowded parking areas by providing a bird's-eye view.

On the list of options is a Platinum Utility package. It upgrades the pickup with an electronic locking tailgate that automatically locks and unlocks at the press of a button. An in-bed storage box is included as well.

If cost is a big concern when shopping for a new 2022 Nissan Titan, strongly consider getting the base King Cab S trim. It’s one of the full-size truck segment’s strongest values.

With a trailer hitch and a spray-on bed liner now coming standard, the Titan King Cab S has become an even better bargain. Buyers will also receive a feature-packed infotainment system and a rewarding number of active safety technologies. Furthermore, the Titan S is just as powerful as the higher trim levels. Folks who simply need more space for their passengers can step up to the much roomier Crew Cab S trim.

Folks who need an off-road-ready pickup truck that can go virtually anywhere will want the Titan Pro-4X. Not only is the Pro-4X trim extremely rugged, but it also comes standard with Nissan’s preciously mentioned Convenience package. While the luxurious Platinum Reserve trim has the lineup’s highest sticker price, some people will be willing to pay for its high-end amenities.