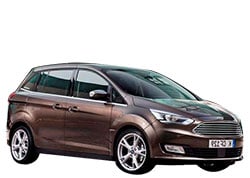 Should You Buy a 2016 Ford C-MAX? Here are the Pros and Cons

When Ford first rolled out the C-Max in the United States, the aim was clear: to dominate the North American hybrid car market. The 2016 Ford C-Max is not quite there yet, but it has become a formidable competitor on the hybrid market. Available both as a conventional hybrid and as a plug-in hybrid in its C-Max Energi form, the C-Max is a solid choice that is superior to other hybrids in many ways though it still lags behind in others.

What’s New for 2016
For the 2016 model year, Ford has upgraded the infotainment control system of the Ford C-Max from the old MyFord Touch system to the newer and more intuitive SYNC3 infotainment. In other ways, the car remains unchanged from 2015.

The cabin of the 2016 Ford C-Max is very spacious and has plenty of room for five adults. The second row has plenty of space for the passengers to stretch out and not feel cramped. The high roof of the car offers plenty of head room so that even the tallest people can sit in the car very comfortably.

Ford has been improving the quality of its cars’ interiors, and the 2016 Ford C-Max shows that progress to its fullest extent. Everything is neatly laid out, and soft touch materials are coupled with high-quality accents to create a luxurious feel inside the cabin. From inside the car, it is easy to imagine you are sitting in a luxury vehicle rather than a Ford.

The new SYNC3 infotainment system is leaps and bounds ahead of the much-maligned MyFordTouch system used in the previous model years. It is very intuitive to use, and most users will quickly get used to controlling it either through the generously-sized touch screen or voice commands. Those who passed on the 2015 C-Max due to the electronics will be impressed with the new system.

One of the classic selling points of a Ford C-Max remains one of its charms. If you have the car key on your person and wave your foot under the car’s rear bumper, the liftgate will open automatically. This convenience feature is a lifesaver for anyone who regularly has his or her hands full.

\The 2016 Ford C-Max is a great vehicle when it comes to convenience and ease of use. Following that trend is its automatic parallel parking system. Not only can it guide the car into a parking space with no input from the driver necessary, but it can also find parking spaces for you in the first place. It is clear that the C-Max was designed with making life easier in mind.

Compact wagons tend to be some of the noisiest cars to drive, but that stereotype does not extend to
the 2016 Ford C-Max. The car’s cabin is very quiet even at high speeds or during spirited acceleration. The suspension and the cabin’s interior materials work together to reduce road noise, and the hybrid system keeps the engine noise limited as well.

One doesn’t usually consider power and acceleration when reviewing hybrids simply because there isn’t much to say on either count. The 2016 Ford C-Max again bucks the typical hybrid trends to deliver 188 horsepower from its 2.0-liter gasoline engine and its electric motor combined. Pressing down the gas pedal feels very satisfying and delivers a quick and timely response.

Just as the C-Max has more power compared to other hybrids, it also features better driving dynamics as well. It has a relatively tightly tuned suspension, and the steering is well-weighted and responsive. Together with the car’s relatively strong engine, it makes for a hybrid that feels just like a regular car when you drive it.

Many hybrids suffer from lag or stutter when shifting between the pure electric mode to the gas-powered mode. The powertrain system on the 2016 Ford C-Max manages that transition very smoothly and almost unnoticeably. This makes it easy to drive the car like you would an ordinary gas-powered vehicle. Adding to that illusion is an efficient electric motor that can power the car on its own at speeds up to 85 miles per hour.

The 2016 Ford C-Max comes both in a standard Hybrid model and a plug-in hybrid Energi model. This gives buyers additional options and flexibility to choose which of the two powertrains they prefer. The two cars are identical other than the plug-in system and the battery, which takes up some cargo space.
Buying Tip: To avoid overpaying on a new car, shop prices online first. Get up front pricing before you walk into a dealership. We recommend the following free services; Car Clearance Deals, NADAguides, CarsDirect & Motortrend.
These free services will offer you the lowest prices and supply you with multiple competing price quotes. You will know the best price before you visit the dealer.

Hybrids are typically purchased for their fuel economy and, unfortunately, the economy of the 2016 Ford C-Max is not as good as its hybrid rivals. In fact, several non-hybrid hatchbacks and wagons get better economy than the C-Max. Those customers that are looking for the top gas mileage numbers may want to consider alternatives.

Because the Ford Focus platform builds the Ford C-Max, its spacious passenger cabin came at the expense of the cargo area. Most other compact wagons and SUVs offer a lot more cargo room than the C-Max. The C-Max Energi makes matters worse by stealing a portion of the cargo compartment to house the car’s battery.

As smaller SUVs get more fuel efficient, they start to compete with hybrid wagons like the C-Max. Even worse, there are several SUV models on the market now that offer hybrid drive trains that are about as economical as the C-Max. Because the C-Max does not offer an all-wheel drive option, those vehicles can be more attractive to buyers in regions with lots of inclement weather.

The Ford C-Max competes against other compact hybrid vehicles such as the Toyota Prius V or the Chevrolet Volt. The Chevrolet Volt is a lot smaller than the C-Max, offering less cargo and passenger space. However, it does offer better fuel economy and a more efficient electric motor. The Toyota Prius V get better fuel economy, offers more cargo space and is cheaper than the Ford C-Max. However, it has a far plainer interior and it is not very exciting to drive compared to the Ford.