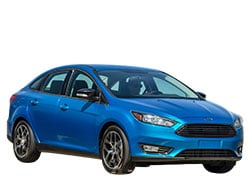 Should You Buy a 2016 Ford Focus? Here are the Pros and Cons

Each of these two versions comes with the standard array of options, features and drivetrain choices, a decently designed cabin, and very sharp handling prowess. The total package comes at a competitive MSRP of $17,225.

Fundamentally unchanged from the 2015 version, the Focus 2016 sedan returns to the market in three models: base S, option-featured SE, and the Titanium top-shelf trim levels. The Ford Focus hatchback is still available in the flagship Titanium SE and entry-level trims as well as the sporty ST plus an Electric variant.

The 2016 Ford Focus has earned praise from reviewers for its nimble handling. This has made driving it to be fun. The Ford Focus has been designed with the goal of appealing to everybody in the car market globally.

In a performance test, the Focus is reported to have accelerated to 60 mph in 9.7 seconds hence providing a first-class and comfortable driving experience.

According to automotive journalists, the base 2016 Ford Focus engine supplies sufficient power for your typical daily commute.

No matter the chosen model, reviewers like the way the new Ford Focus handles.

If you have come to the car market in search of the compact fuel efficient car, the 2015 Ford Focus then deserves a second look. This car comes with an extra dose of:

For an ‘economy car’, unexpectedly, the 2016 Ford Focus brings you a very upscale cabin. The design of the dashboard is aesthetically quite pleasing. The new model of the Focus comes fitted with impressive features.

Auto reviewers concur that the new SYNC 3 system on the Focus has an interface that is very user-friendly and one which can be operated through the same pinch and swipe gestures similar to a smartphone.

Reviews agree that the SYNC 3 brings added value to the 2016 model of the Ford Focus.

Test drivers have been impressed with the cargo space of the Focus hatchback. Some have noted that the rear seatbacks 60/40 split-folding make it easier to load long items.

The new Focus carries five on seats made with leather upholstery.

The previous Focus models of 2015 have garnered 5 out of the possible five stars in safety tests carried out by the government for overall car crash-worthiness. 2015 Focus was given the 2nd best score by the insurance industry, and it would be expected that the new Ford Focus 2016 will carry on the safety tradition.

Reliability data on the car is still unavailable, being a comparatively new model.

Powertrain warranty is for 60,000-mile/5-years.
Buying Tip: To avoid overpaying on a new car, shop prices online first. Get up front pricing before you walk into a dealership. We recommend the following free services; Car Clearance Deals, NADAguides, CarsDirect & Motortrend.
These free services will offer you the lowest prices and supply you with multiple competing price quotes. You will know the best price before you visit the dealer.

Current Focus owners have complained that over long trips, the seats can get a little uncomfortable.

They also report that:

Some test drivers are of the opinion that the 3-cylinder Focus engine isn’t correctly geared for driving when you want low-speeds.

The 6-speed automated manual transmission, unfortunately, does not always come as smooth compared to the standard automatic when at low speeds. Auto critics have commented that the automated optional manual transmission of the base 2016 Ford Focus doesn’t seem to shift smoothly when you are cruising at leisurely speeds.

Although test drivers have reported that the front seats are supportive and roomy, the rear seats of the 2016 Ford Focus are somewhat lacking in legroom when contrasted against some competitors.


Being of the same vehicle class, it is possible to compare the 2016 Ford Focus against Mazda Mazda3 and the Honda Civic 2016 models.

So, should you buy a Ford Focus? 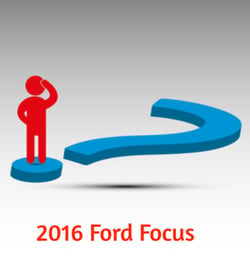 The 2016 Ford Focus has the capacity of delivering a sophisticated experience for your day-to-day driving that's a certainly big deal when it comes to compact sedans. Look out for the arrival of the 2017 Focus in dealer showrooms during this Fall.

Once again, it will be facing off against it perennial rival Mazda in an M3 that is similarly equipped, the ever popular Honda Civic, the value-packed Forte from Kia and the Euro-refined Golf Volkswagen.The 2016 Ford Focus is still a very smart choice if you are looking for a small hatchback or sedan.

• 2018 Ford Focus trim levels. What you get with each trim configuration.