2016 Ford Mustang Pros vs Cons. Should You Buy? 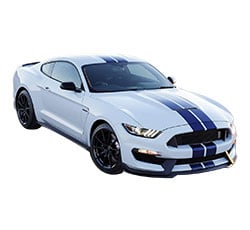 Should You Buy a 2016 Ford Mustang? Here Are Some Reasons For and Against

Featuring an independent rear suspension, the Ford Mustang has morphed into a true sports car. The coupe’s improved handling should make it appealing to even more car shoppers. While the new EcoBoost engine offers good gas mileage, the potent V-8 engine helps the Mustang to stay true to its muscle car heritage. In terms of styling, all versions of the 2016 Ford Mustang are gorgeous.

What’s new for 2016?
The Ford Mustang was completely redesigned last year, so car shoppers should not expect a great deal of changes. However, Ford will offer a few nostalgia appearance packages. Special hood-vent turn signals take the new Mustang back in time to the 1960s. The race-inspired Performance package will now be available for the convertible Mustang GT as well.

For the first time since the early 1990s, the Ford Mustang is available with a four-cylinder. The EcoBoost engine can punch out an entertaining 310 horsepower and 320 pound-feet of torque. When fitted a manual transmission, the EcoBoost-powered Mustang can sprint to 60 mph in about 5.6 seconds. This is a very quick time for a sports car that can deliver more than 30 mpg.

Nicknamed the Coyote, the Mustang’s V-8 engine is a powerful animal. With a total of 435 horsepower and 400 pound-feet of torque under the hood, the Mustang GT delivers the thrills. Expect to hit 60 mph in about 4.5 seconds. While driving purists will like the manual gearbox, the automatic transmission is not a letdown.

Ford understands that some Mustang owners may choose to take their vehicle to the racetrack. To help drivers to get the best possible acceleration, the Mustang is offered with a launch control system. The potent GT model also comes standard with an Electronic Line-Lock feature. This allows the driver to perform effortless burnouts.

The Mustang no longer uses a solid axle suspension. This means that the Mustang is a much nimbler machine. While the standard suspension system is very well-balanced, the available track-tuned suspension allows the Mustang to keep up with many of the high-dollar sports cars on the market. Due to its improved handling, drivers can easily dodge obstacles on the road.

The installation of a Ford’s Performance package can take the Mustang’s performance to the next level. Some of the goodies included in the EcoBoost Performance package include a bigger sway bar, stickier tires, a larger radiator, and specially-tuned stability control system. The GT Performance Package brings a Brembo brake system, a TORSEN rear axle, and a track-tuned suspension.

No other vehicle on the market looks like the Mustang. Equipped with a dual-outlet exhaust system and an aggressive front fascia, the new Mustang is a stunning driving machine. While the standard wheels are not unattractive, prospective buyers can upgrade to a more stylish set. Exotic colors such as Competition Orange and Race Red help the muscle car to make a bold statement.

When it comes to open-air excitement, the Mustang certainly promises to provide plenty of fun. The convertible top can be raised or lowered from the driver’s seat, which makes it very user-friendly.

On the outside, the car’s safety and style is bolstered by a sequential turn signal system. HID headlights also come standard. The interior offers even more exciting features. The heated and cooled seats make the new Mustang a great everyday driver. Meanwhile, the thundering Shaker Pro audio system delivers an incredible amount of bass.

While the standard Mustang is a secure vehicle, buyers can also opt for quite a few active safety features. When taking a trip, the adaptive cruise control system will be extremely useful. The blind-spot monitor is yet another high-tech safety option.

As expected, the Mustang backseat is not the best place for adults. Car shoppers who are seeking more rear-seat space may need to consider the larger Dodge Challenger.

2) Poor Handling in the Snow

Like a lot of RWD vehicles, the Mustang is not the best choice for traveling in the snow. However, the car’s traction control system does make it a decent performer in the rain.

3) Heavier Than Some Sports Cars

With an approximate curb weight of 3,600 pounds, the Mustang is heavier than some of the smaller sports cars on the market.

How the 2016 Mustang stacks up to the competition:

The usual suspects remain the Dodge Challenger and the Chevrolet Camaro. Most automotive critics agree that the 2016 Ford Mustang handles better than the Dodge Challenger. Meanwhile, the Camaro suffers from relatively poor rear visibility. The EcoBoost Mustang is also a more powerful alternative to the Scion FR-S.

For good reason, a lot of people are raving about the performance of the 2016 Ford Mustang. Not only is the new model a showstopper, but it also handles much better than its predecessors. The arrival of more advanced safety features makes it a solid choice for a wide variety of different drivers.
2018 Ford Mustang Buying Guide:

• 2018 Ford Mustang trim levels. What you get with each trim configuration.