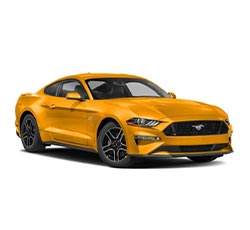 What 2022 Ford Mustang Trim Should You Buy? What is the Difference Between Trims?

Once only known for its straight-line acceleration, the Ford Mustang has become a serious sports car that can hang with many European models. Improved road handling and ride comfort help make it a great pick. While available performance upgrades transform the Mustang into a competitive track machine, this car is comfortable and safe enough to be driven every day of the week.

The Mustang’s iconic styling also helps make it one of the most recognizable cars on the streets. Quite a few eye-catching appearance packages are offered, including an all-new Stealth Edition package. Convertible and fastback coupe body styles are offered. Available premium features make this vehicle more satisfying.

When preparing to buy a new 2022 Ford Mustang, there will be six main trims for fans to choose from. Buyers must consider a few different factors, including how much money they’re willing to spend and fuel economy. Performance can also vary from one model to the next. This guide will give car shoppers a good idea of how the various trim levels compare.

Compare the 2022 Ford Mustang EcoBoost vs EcoBoost Premium Trims. What is the difference?

Drivers who don’t want to overspend will like what the EcoBoost trim has to offer. It is stamped with the lineup’s lowest sticker price. This trim also offers better fuel economy than the more powerful trims. Buyers who prefer the convertible body style should prepare to pay around an extra $5,000 or so.

The Mustang EcoBoost’s power source is Ford’s popular 2.3-liter, turbo-boosted four-cylinder engine. It’s calibrated to press out 310 horsepower and 330 lb-ft of torque. While drivers who prefer to churn gears will prefer the standard six-speed manual transmission, a 10-speed automatic transmission is on the list of options. Despite being the lineup’s most budget-friendly trim, the Mustang EcoBoost can still accelerate to 60 mph in as briskly as 5.5 seconds.

When mated to a manual gearbox, the Mustang EcoBoost has an estimated fuel economy rating of 21 mpg town/29 mpg freeway. Efficiency rises to 21 mpg town/32 mpg freeway with the available automatic transmission. Regular gasoline is recommended by Ford.

This entry-level trim definitely has a stylish look. Highly desirable features, such as LED headlamps and LED taillights with sequential turn signals, are standard. Dual exhaust pipes also help give the Mustang EcoBoost the look of a traditional muscle car. A set of 17-inch aluminum wheels come standard.

While the Mustang EcoBoost isn’t as luxurious as the higher trim levels, it still offers a comfortable commute. Air conditioning and front cloth bucket seats come standard. A tilt-and-telescopic steering wheel makes it easier for the car to accommodate different-sized drivers. Amenities, such as keyless entry with pushbutton start, also help make the base model a good value.

It’s important to note that this trim comes standard with a rather basic infotainment unit. While the tiny 4.2-inch screen does feature an integrated backup camera, advanced smartphone integration is not included. On the bright side, drivers will have access to voice-control technology and Bluetooth. Two USB ports come standard as well.

To give music fans some entertainment, Ford equips the Mustang EcoBoost with a six-speaker stereo. Passengers will especially appreciate the car’s built-in Wi-Fi hotspot. With the use of the FordPass app, drivers can remotely start the engine and lock/unlock the doors.

Like every trim, the Mustang EcoBoost provides a total of eight airbags. Despite its lower price, the EcoBoost trim also receives rain-detecting wipers. Furthermore, buyers won’t have to fork over any extra money for Ford Co-Pilot360. This bundle of safety technologies includes pre-collision braking, active lane-keeping, blind-spot information, and automatic high beams.

There are a few options available for the EcoBoost trim. Drivers seeking a racier performance will be interested in the 2.3-liter High-Performance Package. Aside from adding an extra 20 hp and 20 lb-ft of torque, this package also enhances the car’s track capabilities. A few of the key upgrades include a heavy-duty engine cooling system, stronger brakes, and a sport suspension. An active exhaust enables drivers to enjoy a more stimulating sound.

The High-Performance Package also adds a few appearance upgrades, such as 19-inch wheels wrapped in performance tires and a more aggressive front fascia. Upgraded performance gauges are found on the inside.

Another available upgrade is the EcoBoost Handling package. It equips the car with Ford’s MagneRide suspension, which features adaptive shock absorbers. A Torsen limited-slip differential, wider performance tires, and track-ready Brembo brakes are included as well.

Folks who desire a greater sense of luxury should take a look at the Mustang EcoBoost Premium. While the EcoBoost Premium trim offers the same level of performance, it does come equipped with selectable drive modes.

Some other luxury features are optional on the Mustang EcoBoost Premium. Many drivers will be interested in the available digital gauge cluster, which offers personalized settings. Meanwhile, a 12-speaker Bang & Olufsen stereo system with HD Radio gives your music a more phenomenal sound. Other optional goodies include voice-activated navigation, Recaro performance seats, leather upholstery, and intelligent cruise control.

Compare the 2022 Ford Mustang EcoBoost Premium vs GT Trims. What is the difference?

The Mustang GT is not as luxurious as the Mustang EcoBoost Premium. Its list of standard equipment actually mimics that of the base EcoBoost trim. However, buyers will receive power front seats and rear parking sensors. Larger 18-inches also comes standard.

Stepping up to the GT trim brings a big increase in power. Its monstrous 5.0-liter, Ti-VCT V8 engine presses out 450 hp and 410 lb-ft of torque. This additional muscle results in a quicker 0-60 mph time of roughly 4.2 seconds. Like the EcoBoost models, it allows buyers to pick between a manual transmission and an optional automatic. Rev-matching technology is included with the manual gearbox. Stronger brakes also come standard on the Mustang GT.

A GT Performance package is optional. It elevates the car’s handling capabilities by adding a stiffer suspension, upgraded performance tires, and a Torsen limited-slip differential. Brembo brakes and a heavy-duty engine cooling system sweeten the deal.

Compare the 2022 Ford Mustang GT vs GT Premium. What is the Difference?

The Mustang GT Premium is more upscale than the regular Mustang GT. Aside from full leather upholstery, it features the virtually same amenities and technologies as the Mustang EcoBoost Premium. Similar appearance packages are also offered.

Compare the 2022 Ford Mustang GT Premium vs Mach 1 Trims. What is the difference?

The Mustang Mach 1 is a limited-edition model, which is only offered as a fastback coupe. It comes standard with a greater number of performance upgrades. This includes a special exhaust system, high-performance Brembo front brakes, and Ford’s adaptive MagneRide suspension with heavy-duty springs.

Expect the Mustang Mach 1 to also pack a bit more brawn under the hood. Special tuning and an open-air induction system enable its V8 engine to produce an extra 20 horsepower. Meanwhile, a larger radiator helps keep the engine cool when racing. Acceleration is just a tick swifter.

Special styling cues also differentiate the Mustang Mach 1 from the rest of the lineup. It features unique rocker panel stripes and exclusive 19-inch wheels. A black rear spoiler adds another cool touch. On the inside, you’ll find Recaro cloth sport seats. Other standard niceties include a digital gauge cluster, a nine-speaker audio system, and a cue-ball shift knob.

Compare the 2022 Ford Mustang Mach 1 vs Shelby GT500 Trims. What is the difference?

In terms of sheer muscle, the Mustang Shelby GT500 sits atop the lineup. It features an exclusive supercharged V8 engine that excites drivers by producing a hair-raising 760 horsepower. Although this model does not offer a manual transmission, Ford’s seven-speed dual-clutch automatic transmission is built for racing. Tests show this beast can clock a 0-60 mph time of 3.6 seconds.

Fuel efficiency is not the Mustang Shelby GT500's best quality. It’s only rating to return 12 mpg in city traffic and 18 mpg on the open road. Premium fuel is also a necessity.

No other trim looks quite as aggressive as the Mustang Shelby GT500. Aerodynamic bodywork and a wider stance help give it a menacing appearance. A carbon-fiber rear spoiler and wheels help lighten the car’s weight. Ford also offers a limited-production GT500 Heritage Edition model, which features an exclusive Brittany Blue paint finish and white stripes.

Drivers who are looking for a more budget-friendly muscle car should strongly consider the entry-level Mustang EcoBoost coupe. It offers plenty of fun for less than $29,000. Although its standard infotainment system leaves much to be desired, some drivers won’t mind it. A strong turbocharged engine with decent fuel economy makes the Mustang EcoBoost more appealing. Keep in mind that the convertible body style is quite a bit more expensive

Mustang fans who simply desire more amenities should get the EcoBoost Premium trim. Aside from climate-controlled front seats, it also features a nicer audio system and a far better touchscreen interface.

The Mustang GT is a popular pick for drivers who want the sound and performance of a traditional muscle car. They should be willing to sacrifice some fuel economy. Fortunately, this more potent trim is only around $4,000 more expensive. However, buyers will have to forgo some of the Mustang EcoBoost Premium’s high-end amenities. If these upgrades are desired, step up to the GT Premium trim.

Destined to be a collector’s item at some point, the special Mach 1 model is a tempting option. It comes loaded with performance goodies. However, this trim’s starting price is noticeably higher.

For drivers who desire the performance of a world-class sports car, Ford offers the Mustang Shelby GT500. Its blistering-fast acceleration and lithe handling will impress serious driving enthusiasts. There are just two big issues that may turn some people away. For starters, prices start at more than $74,000. Low fuel efficiency also makes it less practical for daily commuting.

Compare the trims on other Ford Models: