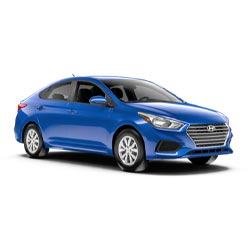 There are many people in the market who simply want to find reliable cars that can safely get them around town. For that type of buyer, the Hyundai Accent would be perfect. The cost of a new Accent is almost surprising, since it's only around $16,000. For such a competitive price, the Accent actually has a lot of nice amenities, including heated seats and a push-button start. The Accent feels like it should be a little more expensive than it really is, and in it, people can feel comfortable and safe.

The 2021 Hyundai Accent is essentially the same as the 2020 version. The only thing different is that the Linen Beige color has been discontinued, and for anyone who is a stickler for color hues, Forge Gray has taken the place of Urban Gray.

Three trims are available with the 2021 Hyundai Accent. The SE is the most budget-friendly, but it definitely feels like a new car with a rearview camera, Bluetooth, and a five-inch touchscreen. The SEL is the mid-level option and has a larger touchscreen, smartphone compatibility, and two USB ports. The Limited tops things off with 17-inch wheels and some more high-tech features.

Since price is such a major factor that drives people towards the Accent, it's probably a good idea to mention the starting price of each trim. The SE comes in at approximately $15,400, the SEL jumps to about $18,000, and the Limited is still quite affordable with a starting price of $19,500.

All three trims of the Accent run on the same type of engine. It's a 1.6-liter, four-cylinder engine that's well-suited for the car. It gets 120 horsepower, which is just enough to satisfy a lot of drivers.

The SE comes standard with a six-speed manual transmission. If a particular customer is interested in the SE but doesn't want to have a stick shift, there's the option to put in an automatic transmission. The type that Hyundai uses is called Smartstream Intelligent Variable Transmission. It's standard on the other two trims, and it does the job just fine.

Standard on the 2021 Accent is a touchscreen. It measures five inches on the SE and seven inches on the others. Bluetooth is standard as well, though the SE doesn't have Apple CarPlay or Android Auto like the SEL and Limited have. On those trims, there is also the addition of SiriusXM Satellite Radio, and they use six speakers in contrast to the four found on the base model.

Hyundai has put in several safety components into the Accent. All models come with a few systems that can help improve stability and control. With the exception of the versions with the manual transmission, the Accent also has Hillstart Assist Control. This system can be important when the car is stopped on an incline. It can prevent the car from rolling backwards when the driver's foot switches from being on the brake pedal to hitting the gas pedal.

In the SEL and Limited, there is an exterior side mirror on the driver's side that can fill in some gaps regarding what's in the driver's blind spot. Further, the Limited has forward collision-avoidance assist. With this system, the Accent can sense when it's about to hit a vehicle in front of it. It can then warn the driver and potentially hit the brakes if necessary.

How to Calculate The Dealer Cost of a Hyundai Accent

Note: All Hyundai Accent MSRP, invoice and dealer cost dollar figures above are approximate amounts. Prices are subject to change without notice.