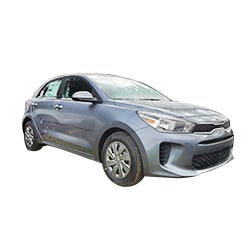 Kia Rio Pricing for the LX and S Trims

Price Tip:
To find the best possible price on a new Kia Rio, shop prices online first. Get up front pricing before you walk into a dealership. We recommend the following free services; Car Clearance Deals,   Edmunds,   NADAguides,   Motortrend  &   CarsDirect
These services will offer you the lowest prices and supply you with multiple competing price quotes. You will know the best price before you visit the dealer.

How to Calculate The Dealer Cost of a Kia Rio

It seems like most things have gone up in price lately. That's why the Kia Rio, a subcompact sedan, is so appealing. It has a lot to offer, and Kia has kept its price tag pretty low. Sure, the Rio isn't exactly luxurious, but it's practical, reliable, efficient, and modern in terms of its technology. It should definitely catch the eye of budget-conscious consumers who like the idea of getting great deals on their next vehicles.

Very little has changed about the Rio for the 2022 model year. Like all of the other vehicles in Kia's lineup, the 2022 Rio gets to showcase Kia's redesigned logo. Plus, the car gets some new anti-theft security protection in the form of an engine immobilizer. If someone attempts to start the engine without the ignition key that the car originally came with, the immobilizer will kick into action.

The Rio runs on a 1.6-liter engine. It uses an intelligent variable transmission and can generate 120 horsepower and 112 pound-feet of torque. These numbers aren't that impressive, but they're likely not a surprise to customers interested in cars like the Rio. If the Rio can get someone from one place to another safely, it will likely meet their expectations.

Kia has given the Rio a number of standard safety components, in addition to making driver-assist technologies optional. The Rio is built with crumple zones in the front and rear, door beams that can protect from side impacts, and a vehicle stability management system. When it has been stopped on a slope, facing uphill, its hill start assist control program can prevent it from sliding backwards before it gains enough momentum to move forward.

Several driver-assist technologies are available on the higher of the two Rio trims, which is the S. The Rio S can be upgraded with mechanisms that can keep the car from drifting out of position, and it can have forward collision warning with pedestrian detection and automatic emergency braking. It can also have a driver attention warning program that can sense when someone needs to focus more on the road rather than elsewhere. These can all prove to be useful since issues can arise suddenly at any time.

Understanding that today's consumers like their technology, Kia has made an eight-inch touchscreen standard on the Rio. Along with that touchscreen comes wireless Android Auto and wireless Apple CarPlay. Bluetooth and Siri Eyes Free are also standard. Siri Eyes Free lets users give voice commands rather than having to fiddle with the touchscreen while driving.

SiriusXM is an option on the higher trim only. There isn't any opportunity to upgrade to a larger touchscreen, nor is there an option to get built-in navigation.

As just mentioned, there are two available trims. The first is the LX, and the other is the S. The LX is fairly limited in its color scheme. It's exterior paint can only be white, gray, or black, and the color scheme inside the cabin is black. In contrast, the S is available in six different colors, including vibrant shades of red and blue. The S's cabin can either have a black or gray color.

Both trims come with heated side mirrors, which might be a nice surprise to customers who weren't expecting to find this type of amenity with the Rio. The S is available with LED headlights and automatic high beams. Otherwise, it would have halogen headlights like the ones found on the LX. The two trims ride on 15-inch wheels, with the S offering the option to get alloy wheels instead of steel ones.

The cabins of the LX and S are modest but comfortable. There's 42.1 inches of front-row leg room and 33.5 inches of rear-seat leg room. Both trims have cloth upholstery and manually adjustable front seats, and the S trim gets to have a center console with storage and a sliding armrest.

Rear seats on the S have adjustable headrests, and this trim's rear seatback is split into a 60/40 configuration. This allows for more flexibility when it comes to carrying larger items. Rather than folding down the entire seat and not having any place for a rear-seat passenger, just one side of the seatback can be lowered.

There are some other notable upgrades that make the S worth its addition cost. This is especially true considering that the price difference between the two trims is less than $1,000. First, it comes with two more USB charging ports. Further, it's the only trim to feature cruise control and remote keyless entry. For a bit more money, it can be upgraded with automatic climate control and smart entry with push-button start.

The Kia Rio knows its place in the industry and does a great job attracting potential buyers with its smartphone compatibility and fuel economy. The S seems like the best option since it has several more convenient features that can be appreciated on a regular basis.

Note: All Kia Rio MSRP, invoice and dealer cost dollar figures above are subject to change without notice.