2017 Toyota Avalon Pros vs Cons. Should You Buy? 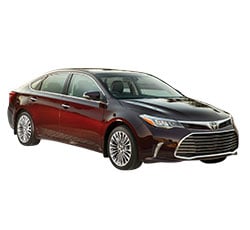 Should You Buy a 2017 Toyota Avalon? Here Are Some Reasons For and Against

The 2017 Toyota Avalon has positioned itself as one of the top values in the luxury sedan segment. Its proven reliability and surplus of premium features should intrigue plenty of car shoppers. In the eyes of many Toyota fans, the sedan now looks more exciting than ever before.

Although the 2017 Avalon is a full-size ride, it is able to rival the fuel efficiency of a much smaller sedan. You can expect to get 21 mpg in the city and a solid 31 mpg on the highway. The luxury car’s relatively lightweight design certainly contributes to its fuel savings. Furthermore, Toyota recommends regular unleaded gas.

Known for its smooth power delivery, the car’s punchy V-6 engine churns out 268 horsepower and 248 pound-feet of torque. The sedan does an exceptional job of transferring the power to its front wheels. A 0-60 time of 6.2 seconds makes it one of the quickest luxury cars in the class. Drivers will immediately feel the extra pep when merging onto the highway.

The 2017 Avalon is expected to offer great long-term reliability. You will be able to drive for thousands of miles without experiencing any major problems. Repair shops rave about the sedan’s outstanding build quality. It is a trustworthy family vehicle that will withstand the test of time. A 60,000-mile powertrain comes standard.

4. A Pleasure to Drive

While behind the wheel of the 2017 Toyota Avalon, a lot of people will be surprised by its fun-to-drive character. Its effortless acceleration and precise steering will leave you impressed. While even the base XLE model feels secure on twisty roads, the Touring trim’s sports-tuned suspension further improves its handling.

Featuring an attention-grabbing front grille and crisp body lines, the 2017 Avalon certainly has a lot of flair. Dual exhaust tips also come standard. A beautiful set of 18-inch wheels gives the Touring model an extra degree of sportiness. Stylish LED headlamps take the sedan's appeal to the next level. Some of the most stimulating paint colors include Ooh La La Rouge, Parisian Night, and Magnetic Gray.

You can always expect the new Toyota Avalon to offer a plush ride. Even the stiffer sports-tuned suspension effectively soaks up the rough pavement. Your family members will also love the sedan’s spacious design. When lounging in the backseat, everyone will have ample legroom. Ventilated front seats and heated rear seats are optional.

A number of exciting components come standard on the 2017 Toyota Avalon. An eight-speaker sound system and HD radio enhance your music-listening experience. Meanwhile, Toyota’s Entune™ infotainment system has been applauded for its user-friendly design. Leather upholstery lines the entire cabin. Some of the other goodies consist of Bluetooth technology, a rear-view camera, and a 7.0-inch touch-screen display.

While the base Avalon is a solid value, the higher trim levels offer an especially impressive list of features. A Qi wireless charger makes it easy for drivers to keep their phones fully juiced. Featuring an powerful amplifier, the JBL sound system pumps out extra bass. Meanwhile, a tri-zone climate control system enables everyone to feel at home.

The new Toyota Avalon received a class-leading, five-star safety rating. With the arrival of more standard safety technologies, the sedan now gives drivers an even greater sense of awareness on the road. In the event that another vehicle suddenly comes to a stop, the car’s automatic braking system will immediately respond. Dynamic Radar Cruise Control is great for highway traveling.

When stacked against today’s other flagship luxury sedans, the Toyota Avalon’s attractive price tag gives it a clear advantage. The base XLE model costs around $32,500, which is not significantly more expensive than some family sedans. Expect to shell out roughly $40,000 for the fully loaded Limited model.

Reasons Not to Buy a 2017 Toyota Avalon – The Cons

Most car reviewers agree that the Avalon is a fine luxury sedan. Nonetheless, it is not as extravagant as models such as the Mercedes-Benz S-Class sedan. While this is not an area of concern for most car shoppers, some drivers may prefer a more prestigious nameplate.

The 2017 model still does not offer an AWD system. While the sedan will perform quite well in rainy conditions, an AWD system would make it a better performer in snowy weather. This should be a key consideration for the drivers who routinely experience harsh winters.

The overwhelming majority of test drivers will like the sedan's strong V-6 engine. Unfortunately for some car shoppers, the 2017 Toyota Avalon can't be equipped with a different engine. Many of its rivals now offer at least two engine choices.

From a value standpoint, the 2017 Toyota Avalon stands near the top of its class. Drivers will appreciate the sedan's dependability and refined performance. Furthermore, the 2017 model now comes loaded with an abundance of advanced safety technologies. If you are seeking an especially sporty driving experience, check out the athletic Avalon Touring.