2017 Toyota Tundra Pros vs Cons. Should You Buy? 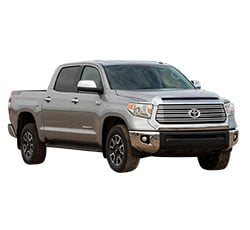 Should You Buy a 2017 Toyota Tundra? Here Are Some Reasons For and Against

Although the Toyota Tundra is not the top-selling truck on the market, it does deserve to be mentioned among the best. Then Tundra’s durability and brawny performance enable it to stand toe-to-toe with any other full-size pickup. While the base SR model is an attractive bargain, the high-end Platinum trim comes loaded with premium features. If you desire to travel off-road, the tough-nosed TRD Pro model is your perfect match.

For the 2017 model year, Toyota decided not to make nay major changes to the Tundra.

Under the hood of the 2017 Tundra sits a meaty V-8 engine. The 4.6-liter engine pumps out a stout 310 horsepower and 327 pound-feet of torque. It has just the right amount of muscle for most truck enthusiasts. A six-speed automatic transmission comes standard. When needed, you can tow up to 6,800 pounds.

If you are the type of driver who needs the most pulling power possible, step up to the larger 5.7-liter engine. Toyota’s i-Force engine churns out 381 horsepower and 401 pound-feet of torque. Although there are more potent engines in the class, this is arguably the toughest one. Regarding towing, you will be able to pull up to 10,500 pounds.

When equipped with all-wheel, the 2017 Tundra becomes a dependable winter vehicle. The truck’s impressive ground clearance helps prevent you from becoming bogged down in deep snow. A two-speed transfer case comes along with the 4WD system, which gives you a greater measure of versatility. A proper set of snow tires will aid the truck’s traction.

Hardcore adventure seekers should check out the dynamic TRD Pro model. The 2017 Tundra TRD Pro is certainly engineered to handle nature’s obstacles. It is by far the most rugged version of the Tundra. A special off-road suspension helps the truck to topple rough landscapes with no difficulty. You will also benefit from a set of all-terrain tires.

When attempting to maneuver in a tight parking area, the truck’s light steering will come in handy. Although the Toyota Tundra is a rather large truck, its steering system requires less effort than most other systems. This means that you won’t have to struggle in low-speed driving situations. Traveling in a congested city is surely less of a chore.

6. Base Model Is a Worthy Choice

If you don’t want to spend an enormous amount of money, the base Toyota Tundra will prove to be a good choice. It has an appealing MSRP of roughly $30,000. A standard V-8 engine gives the Tacoma an advantage over some of today’s other full-size pickups. Some of the notable standard features include a rearview camera, a 6.1-inch touch-screen display, and Bluetooth technology.

The 2017 Toyota Tundra has a sturdy appearance that will impress a lot of new truck shoppers. When cruising along the interstate, the pickup’s large stature gives it a dominating road presence. Toyota also offers some stylish trim packages. LED running lights and a set of 20-inch alloy wheels are featured on the top-of-the-line Limited model.

You will love this truck’s spacious design. While the regular cab is roomy, the crew cab model offers a class-leading amount of legroom for your backseat passengers. Even your tall family members will be able to ride in comfort. Unlike some of its competitors, the 2017 Toyota Tundra provides reclining rear seats. You can also flip up the seat cushions to make room for extra cargo.

Toyota’s Entune infotainment is a breeze to use. In contrast to some modern interfaces, the Entune system does not force drivers to deal with any complicated controls. Not only is the touch-screen display responsive, but you can also easily connect your smartphone.

When equipped with all the bells and whistles, the new Toyota Tundra is quite luxurious. A thumping JBL sound system takes the Platinum model’s fun factor to the next level. Ventilated seats provide enhanced relaxation on humid days. Meanwhile, blind-spot monitoring ensures extra protection on the highway. Navigation is also offered.
Buying Tip: To avoid overpaying on a new car, shop prices online first. Get up front pricing before you walk into a dealership. We recommend the following free services; Car Clearance Deals, NADAguides, CarsDirect & Motortrend.
These free services will offer you the lowest prices and supply you with multiple competing price quotes. You will know the best price before you visit the dealer.

Reasons Not to Buy a 2017 Toyota Tundra – The Cons

Don't expect the 2017 Toyota Tundra to be easy on gas. When fitted with the larger 5.7L engine, the 4WD model returns a dismal 13 mpg in the city. No version of the pickup can surpass 19 mpg on the highway. This could prove to be a concern for the drivers who travel on an everyday basis.

Although the 2017 Tundra's ride quality is satisfactory, it comes up short when stacked against the competition. For example, the Ram 1500's optional air suspension offers a superior level of ride comfort.