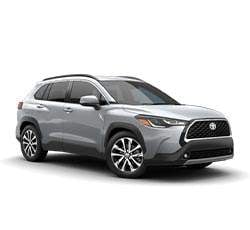 What 2022 Toyota Corolla Cross Trim Should You Buy? What is the Difference Between Trims?

For the 2022 model year, Toyota is adding another SUV to its lineup, and it's called the Corolla Cross. With this name, it would seem as if the Corolla Cross would be very similar to the Corolla sedan. There are certainly several similarities between the two, but the Corolla Cross is most definitely an SUV. It offers the height and interior cargo space that many potential buyers are looking for.

For now, there are only three trims of the Corolla Cross. This model is quite affordable, so any of the trims would make for a practical choice for those who'd like to score good deals on their next vehicles.

Compare the L vs LE Trim Levels. What is the difference?

When these two trims are side by side, a few things will immediately jump out. First, the LE has privacy glass on its rear windows. Many people prefer to have this type of glass because they like that it provides shade and keeps others from seeing into the cabin so easily. The LE also has black roof rails which can prove useful in some situations. Even if they aren't utilized very often, or at all, they can make an SUV seem more sporty and rugged.

Both trims have black grilles and color-keyed rear spoilers. The L has black side mirrors, and it's nice that they have heating elements built into them. On the LE, the side mirrors are color-keyed. They, too, are heated, and they have turn signal indicators as well.

The other exterior differences can't easily be seen, but they can surely be appreciated. The LE has a rear wiper, but the L does not. Plus, the LE's door handles have touch sensors on them that work with the smart key system. When the key fob is close to the vehicle, such as when it's in the driver's pocket and he/she has just walked up to the Toyota, the sensors on the door handles can be touched to unlock the doors. These touch sensors have been placed on both front doors in the LE.

There are more differences inside the cabins of these two trims. The L has a manual air conditioning system while the LE has an automatic one. The LE's sun visors have sliding extensions and illuminated vanity mirrors, and this trim has a leather-wrapped steering wheel instead of one that's wrapped in urethane, which is what the L has.

As part of the smart key system, the Corolla Cross LE has push button start. This is convenient since it allows people to keep their keys securely stored for the duration of the trip. Keys can simply stay in someone's bag all the time instead of having to come out to physically start the ignition.

Both the L and LE have pretty solid infotainment systems. They have touchscreens that are easy to use, and they have Android Auto and Apple CarPlay. As a bonus, they feature Amazon Alexa and SiriusXM Satellite Radio. These programs can give passengers access to all kids of information and provide plenty of radio stations to choose from. The difference is that the L's touchscreen measures seven inches and the LE's touchscreen is an eight-inch version.

The LE also comes with wireless charging. It works with compatible devices and can keep the center console free of cords, which can get messy at times. With the LE, but not the L, there's the opportunity to upgrade to a better sound system. It consists of nine JBL speakers, including a subwoofer and amplifier.

The upgraded infotainment package would have Remote Connect as well. Remote Connect gives drivers the ability to connect a smart device with their vehicles. Through an app, they can check on the status of their vehicle, pinpoint its parked location, remotely lock or unlock the doors, remotely start the engine, and set limits if guests are driving.

With the standard system, the L and LE still get to take advantage of Connected Services. As part of this program, the SUV can act as a Wi-Fi hotspot through which up to five devices can connect to the internet. The Service Connect component provides drivers with maintenance reminders, maintenance alerts, and vehicle health reports. Finally, Service Connect offers emergency assistance and roadside assistance 24 hours a day, and it ensures that a response center will be automatically notified if the Corolla Cross's air bags ever deploy or if the vehicle is involved in a major rear-end collision.

Toyota seems to always do a good job of equipping its vehicles with modern safety equipment. Fortunately, the L has a comprehensive set of driver-assist technologies. This includes pre-collision warning with pedestrian detection as well as automatic emergency braking so that the SUV can hopefully avoid hitting objects in front of it.

The Corolla Cross can keep itself centered in a lane, thanks to lane departure alert, steering assist, and lane tracing assist. With adaptive cruise control, it can maintain a set speed and make adjustments if the flow of traffic requires the vehicle to slow down or later speed up. It also comes with automatic high beams and road sign assist. This latter feature is not as commonly found on models that are this affordable.

With the LE, there are two additional features. They are blind spot monitoring and rear cross-traffic alert. These programs can act as an extra pair of eyes, proving to be quite useful when it's hard for the driver to see in every direction.

Compare the LE vs XLE Trims. What is the difference?

Like the L and the LE, the XLE is available with either front-wheel or all-wheel drive. All three trims use 2.0-liter engines that can make 169 horsepower and 151 pound-feet of torque. They have continuously variable transmissions with intelligence and shift mode.

What is noticeable are the exterior enhancements that the XLE has. Instead of having regular Daytime Running Lights, it has LED ones that look modern and stylish. In addition to having LED headlights like the other trims have, it has LED front signals and LED fog lights. It has LED taillights, too.

All three trims have black grilles. However, the XLE's grille has a metallic paint surround so it stands out a bit more. The chrome around the side windows has a similar effect.

The cabin of the XLE is much more equipped than that of the LE. First, it has heated front seats, which those in colder climates will really appreciate. It has a ten-way power-adjustable driver's seat with lumbar support, and the XLE's seats have SofTex upholstery rather than fabric. In the back seat, there is a rear folding armrest that passengers can use when no one is sitting in the middle seat. In total, there are six cup holders on the XLE, compared with four on the lower trims.

At this level, the shift knob is wrapped in leather, and the automatic climate control system has two zones instead of just one. Ambient lighting can give the cabin a more sophisticated feel. While the other trims have black door handles, the XLE gets to have satin-finish door handles. Its glove compartment has a convenient light inside of it, and in the back, there's a tonneau cover to hide whatever is in cargo area. That tonneau cover is available on the LE for an additional cost.

Behind the steering wheel on every trim, there is a digital information cluster. On the L and LE, it measures 4.2 inches. On the XLE, it's considerably larger, measuring seven inches. The XLE has another component that the others don't have, and that's an auto-dimming rearview mirror. Other than that, the technology on the XLE and LE is pretty much the same. Both have wireless charging, smart key entry, eight-inch touchscreens, and the same available upgrades.

There are a few extra safety features built into the safety package of the XLE, though. Remember that the LE has blind spot and rear cross-traffic monitoring. On the XLE, those same features are in place, but they come with the addition of braking assist. If the driver is about to change lanes at the wrong time or back up into traffic, the Corolla Cross will apply pressure to the brakes in an effort to warn the driver about the situation.

The XLE's backup camera has dynamic gridlines to assist with making more precise maneuvers. The other trims have backup cameras, too, but they don't have those gridlines. Also, the LE has front and rear parking assist so that the chances of hitting something when getting in and out of a parking spot are greatly reduced. When it seems like a driver is about to hit an object in front or behind the vehicle, audio and visual cues will be issued, and the Toyota can hit the brakes to hopefully stop itself before making contact with that object.

These three Corolla Cross trims all have the same type of engine, so when selecting which one to get, there's nothing to think about in terms of capability and performance. Instead, potential buyers will have to consider the quality of exterior features and what type of interior features they prefer. Of course, budget plays a major role in this decision-making process.

The L trim only costs a bit more than $22,000. This may be a hard deal to pass up, especially since it comes with a touchscreen, smartphone compatibility, SiriusXM, and driver-assist technologies. If that's all that someone is looking for with his or her next vehicle, then the L would be perfectly acceptable. It's safe and reliable, it has modern systems, and it has the size that many customers find to be ideal.

However, the L is limited in a few ways. It doesn't have the smart key system, nor does it have automatic climate control, blind spot monitoring, or wireless charging. The LE, even, is a bit lacking in terms of its interior style and convenience.

That's why the XLE is the recommend trim. It has the most striking appliance with its full set of LED exterior lights. Inside its cabin, there are elements that can't be found on the other trims. For example, it has dual-zone climate control, leather on its steering wheel and shift knob, ambient lighting, and heated front seats. It's the only trim to have SofTex upholstery, and it has a large digital information cluster and the best safety package out of the bunch.

From a price perspective, the Corolla Cross XLE is still reasonable. The price increase when jumping from the LE to the XLE is less than $2,000, and it's likely that most buyers will find that increase to be justified.