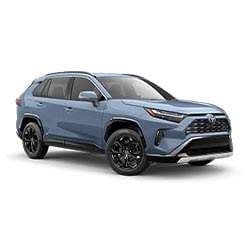 What 2022 Toyota RAV4 Hybrid Trim Should You Buy? What is the Difference Between Trims?

Following on the success of the popular RAV4, the RAV4 Hybrid has done quite well in recent years. The 2022 RAV4 Hybrid is athletic and efficient, and it has a versatile and well-equipped cabin.

Toyota makes six trims of the RAV4 Hybrid, so there's definitely a lot to think about. Instead of starting off the lineup with the L trim, as it does with some other models, Toyota makes the LE the entry-level version. The LE has a nice amount of high-tech equipment, which will be discussed below. The XLE, XLE Premium, and SE hybrids make up the middle of the lineup, with the Hybrid SE being a new addition. Finally, there are the XSE and Limited, two trims that have an impressive amount of features.

Before jumping into the differences between the trims, it may be a good idea to briefly discuss their similarities. These trims, along with the others, have plenty of interior space, with 37.8 inches of rear-seat leg room and a cargo area that has a volume of 37.6 cubic feet.

Plus, they all run on the same type of powertrain. The powertrain consists of a pair of electric motors and a 2.5-liter, four-cylinder engine. Together, they can deliver 219 horsepower. They come standard with electronic on-demand all-wheel drive and an electrically controlled continuously variable transmission. Drivers get to choose from Sport, Eco, Normal, EV, and Trail modes, and combined fuel economy is estimated to be 40 miles per gallon.

Compare the LE vs XLE Trim Levels. What is the difference?

The Hybrid LE and Hybrid XLE are very close to each other in terms of cost. Based on this, it's to be expected that they have many of the same features. This is true in some regards. For example, both trims have 17-inch wheels, LED daytime running lights, and LED taillights. Inside their cabins, there are dual-zone automatic climate control systems, 4.2-inch digital displays, and LED reading lights.

There are some key ways in which the Hybrid XLE is distinct from its more affordable counterpart. First, it has LED projector headlights instead of multi-LED headlights. On the XLE, the bezels are chrome, whereas the LE has black bezels. A major advantage is that the Hybrid XLE has a smart key system and touch sensors on the front doors. The LE is stuck with a traditional remote keyless entry system.

Another exterior upgrade on the Hybrid XLE has to do with its side mirrors. Those mirrors are color-keyed and have heating elements, turn signal indicators, and blind-spot warning lights. Those types of mirrors are available on the LE as part of a package, but otherwise, the LE would have black power-adjustable mirrors.

More differences are found in the cabins. The Hybrid LE has black door handles, while the Hybrid XLE has silver ones. Both trims have fabric upholstery on their seats, but the XLE gets to have embossed polygonal-design seat inserts and a power-adjustable driver seat with lumbar support. Though heated front seats aren't standard, they can be added to the XLE as part of a package, as can a heated leather-trimmed steering wheel. In addition, the XLE provides users with a tonneau cover for the cargo area.

In the area of technology, the XLE has the advantage with five total USB ports instead of the standard three. Both trims have seven-inch touchscreens with smartphone integration, Amazon Alexa, and SiriusXM, so the standard package is actually pretty impressive. The XLE can be upgraded with a nine-inch touchscreen and remote services.

Finally, the Hybrid XLE has the better safety package since it comes with blind-spot monitoring and a rear cross-traffic alert. The Hybrid LE still has a solid set of driver-assist technologies that can active work to prevent accidents, but it lacks those two key features.

Compare the XLE vs XLE Premium Trim. What is the difference?

The Hybrid XLE Premium feels more upscale than the Hybrid XLE does. It has 18-inch wheels instead of 17-inch ones, and the dark metallic finish looks striking. The XLE Premium benefits from having integrated LED fog lights as well.

More notably, perhaps, this higher trim has a power moonroof. This type of moonroof is available on the Hybrid XLE, but not standard. Something else that drivers will appreciate is the Hybrid XLE Premium's power liftgate. Its height can be adjusted, and it comes with jam protection. Again, this feature is optional on the Hybrid XLE.

The next few elements seem fairly minor but may be noticeable to some with discerning eyes. The XLE Premium has center console accents and anti-slip interior door grips, along with anti-slip in-dash storage trays.

Compare the XLE Premium vs SE Trims. What is the difference?

The Hybrid SE is a more athletic version of the RAV4 Hybrid, and as such, it has a sport-tuned suspension. This type of suspension is firmer than a standard one, resulting in sharper handling. Many driving enthusiasts can notice a significant difference when a vehicle is equipped with this type of suspension.

Toyota has give the Hybrid SE black sport alloy wheels instead of dark metallic-finish ones. Keep in mind, though, that the SE does not have integrated fog lights, a power moonroof, or a power liftgate like the XLE Premium does. The moonroof and power liftgate are available on the Hybrid SE, but not the LED fog lights.

Though it's the more expensive version out of these two trims, the Hybrid SE does not have the available parking assist function that the XLE Premium can have. It, too, comes with a seven-inch touchscreen. It can be upgraded with a nine-inch touchscreen, but it does not give users the opportunity to get a JBL sound system.

Up until this point, it seems as if the Hybrid SE really doesn't offer that much other than an enhanced suspension. That may be true, but a potential buyer will want to see the cabin of the SE before making any type of decision.

The SE may seem a bit basic in some regards, as it has fabric seats and lacks heated front seats. However, it does have a few unique elements. While the lower trims have ash gray headliners, the Hybrid SE has a black headliner. Its seats have blue stitching and embossed seat inserts, and there are blue-stitched accents on the dashboard, doors, and center console. Blue ambient lights on the in-dash shelves, front footwells, and cup holders add yet another cool touch.

Compare the SE vs XSE Trims. What is the difference?

The Hybrid XSE shares many things in common with the Hybrid SE, but it also gets to have the more refined components that are missing from the SE. Of course, this comes at a cost, but this may all be worth it for certain buyers.

One major distinction is that the XSE has a two-tone look. Many prefer this look since it makes the vehicle look more edgy and unique. Toyota brings back the power moonroof with the XSE. This trim, alternatively, is available with a panoramic glass roof. That roof would have two panels, with the one in front being able to tilt or slide open.

Further, the XSE has vertical LED accent lights and bright blue shock absorbers, and it has black heated side mirrors. Like the XLE Premium, but not the SE, the XSE comes standard with a power liftgate.

Once someone gets inside the XSE and turns on the engine, the seven-inch digital display behind the steering wheel should become obvious. This display is much larger than the standard 4.2-inch display.

Also, the SofTex seats have blue stitching, and both front seats are heated. This is the first level at which this feature is standard. The XSE's rearview mirror has an auto-dimming function and a HomeLink universal transceiver.

Another thing that needs to be touched upon is the fact that the XSE comes standard with a nine-inch touchscreen. Having this larger screen can make a difference to some consumers.

Compare the XSE vs Limited Trim Levels. What is the difference?

While it is the most sophisticated RAV4 Hybrid available, the Limited doesn't have the sport-tuned suspension that the XSE and SE have. It looks refined with its integrated LED fog lights and chrome-accented door handles. Like the XSE, the Limited comes standard with a moonroof and is available with a panoramic glass roof.

As the most upscale hybrid RAV4, the Limited benefits from having heated and ventilated front seats. Both of its front seats are power-adjustable, and they're trimmed in SofTex. The driver's seat has a two-position memory function, too.

Instead of blue accents as found in the XSE, the Limited has more elegant dark brown accents. Dark brown stitching is on the doors, seats, and dashboard, and there are dark brown cup holders. There is, though, blue ambient lighting on the Limited.

The infotainment system on the Limited is one to be envied. It comes standard with a nine-inch touchscreen and 11 JBL speakers, including a subwoofer. The Limited can be upgraded with navigation, as can the XSE.

A last point is that the Limited has front and rear parking assist with automatic braking. This program is available on several of the other hybrid trims, and it provides warnings when drivers are getting too close to objects. It can even help them avoid minor collisions by applying pressure to the brakes.

The RAV4 Hybrid isn't a luxury vehicle by any means, but its higher trims do have prices that are somewhat high. If someone really wants the enhanced suspension, it makes sense to get either the SE or the XSE.

That being said, most consumers will be perfectly content with the regular suspension. In this case, it seems to make more sense to get one of the mid-level trims because they have much more competitive pricing.

The XLE, in particular, stands out. It's affordable while still having a smart key system, high-tech outside mirrors, a power-adjustable driver's seat, blind-spot monitoring, and rear cross-traffic alert. It can be upgraded with heated front seats, which is nice. If a buyer prefers a model with a bit more, then the XLE Premium would be the right choice since it has heated front seats, a moonroof, and SofTex upholstery.