2016 Toyota Avalon Hybrid Pros vs Cons. Should You Buy? 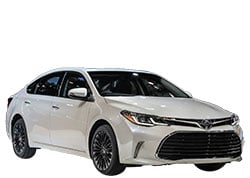 Should You Buy a 2016 Toyota Avalon Hybrid? Here are the Pros and Cons

The advantage of the 2016 Toyota Avalon Hybrid is that people have five different trim levels to choose from:

That means that drivers will have a lot of choice when it comes to their vehicle in how it looks.

Looking for a car that will give the biggest bang for the buck? The 2016 Toyota Avalon Hybrid features a seven-inch touchscreen for navigation, nine speakers, a rear view camera, top-grade leather seating, climate and cruise control. The leather seats are more than an individual might expect. Not only do they provide buyers with heated cushioning, they also have an option for massage.

The 2016 Toyota Avalon Hybrid features 10 airbags, which is known as an Advanced Airbag System. Also, the crash test safety ratings have been solid across the board. Buyers have access to a backup camera system and a blind spot monitor with the Touring models. Drivers can fit the limited sedan with adaptive cruise control, automatic headlights, a forward collision warning system and a Lane-Departure warning system.

If buyers choose the 2016 Toyota Avalon Hybrid, they will have access to a strong and smooth engine. It features 265 horsepower and a four-cylinder engine. The overall weight of the vehicle is 3,584 lb.

With a 2.5 liter inline, this car can speed from zero to 60 in eight seconds flat. Consumers have access to the same Hybrid Synergy Drive System that could be found in the ES 300h models.

Not only does the 2016 Toyota Avalon Hybrid leave the competition in its class in the dust on gas mileage, but it also takes the lead in other classes too. This car boasts 40 miles per gallon with city driving, and on the highway, it gives drivers 39 miles per gallon. Considering it is a big four-door car, that is impressive.

With this vehicle, buyers can enjoy the driver plus four passengers without facing discomfort. The top-grade leather and wood materials, along with the soft and expensive plastics have been used to provide the optimum riding experience. The steering wheel can be adjusted for height, and it has been covered with soft leather.

When a person chooses the 2016 Toyota Avalon Hybrid, they have chosen a solid and dependable vehicle that provides them with greater efficiency. The lavish interior has become a selling point to a lot of buyers who want some luxury in their vehicle, yet the low cost of ownership helps to appeal to the more frugal buyers.

Want to achieve better balance and handling? The engineers tweaked this vehicle's stabilizer bars to add to the comfort and suspension of this ride. Not to mention, drivers have 18-inch tires that are more absorbent and can handle body motions more slowly and gently. The great thing about the handling is that there is no excessive body lean when driving.

Considering that the Avalon enjoys a 40 percent model loyalty rate, Toyota has a lot of drivers who see something good in this vehicle. The series has become wildly popular because it has long been known for its supreme comfort and isolation that sets it apart from the other vehicles on the road. If a person does choose the Touring or Limited trim, however, be wary that it might seem like a brittle or stiff ride that does not match the character of this upscale vehicle.
Buying Tip: To avoid overpaying on a new car, shop prices online first. Get up front pricing before you walk into a dealership. We recommend the following free services; Car Clearance Deals,   Edmunds,   CarsDirect,   NADAguides  &  Motortrend. These free services will offer you the lowest prices and supply you with multiple competing price quotes. You will know the best price before you visit the dealer.

Reasons Not to Buy a 2016 Toyota Avalon Hybrid – The Cons

When people go to buy the 2016 Toyota Avalon Hybrid, you will pay around $32,650. That is a lot of money for a vehicle that does not come with the Lux Badge. A lot of buyers might
be turned off by that fact, considering that there are luxury vehicles out there available at almost the same price with more amenities.

While this might seem like a bit of a nitpick but when people are paying $32,650 for a vehicle, they can afford to be a little picky. The 2016 Toyota Avalon Hybrid has a taillight that does nothing for the rest of the appearance of the vehicle. While it still looks fantastic, it would be nice if there were more to it than that.

#3: Spongy Feel to the Brake Pedal

The brake pedal of this car can take some getting used to. When a person first goes to hit the brake pedal, it has a spongy feel that can be somewhat distracting while driving.

How it stacks up

Other choices include the 2016 Buick LaCrosse or the Chevrolet Impala. The Impala costs 27,095, while the Buick LaCrosse costs $31,065, and both of these vehicles have received lower ratings than the 2016 Toyota Avalon Hybrid. By comparison, the Avalon has better gas mileage than both of these vehicles. The advantage of the 2016 Avalon is that they returned the vehicle's suspension to align better with the preferences of customers. That shows that Toyota does listen to its customers. The latest Avalon also feels more composed and refined than its predecessors. Whether it suits the personality of the driver is up to them.