2016 Toyota Sienna Pros vs Cons. Should You Buy? 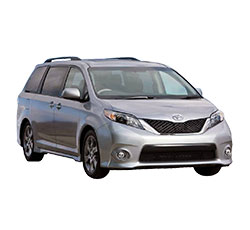 Should You Buy a 2016 Toyota Sienna? Here are the Pros and Cons

The 2016 Toyota Sienna has been updated with a few technology features. The Siri Eyes Free system is standard and lets you access Apple’s electronic assistant through the communications display. The Scout GPS Link app is available on some models and syncs your smartphone navigation with the van’s central display.

Change the temperature, radio volume and other central controls more easily. With the wraparound dashboard design, buttons are close to the driver. The 2016 Sienna’s controls are large, bold and straightforward. This allows the driver to cater to all the passengers' needs as quickly as possible.

The available second-row captain’s chairs make you feel as though you’re lying in the recliner in your living room. The seats tilt back, and footrests extend to give you a place to rest your legs.

No other minivan gives you the option to select the all-wheel drive. With this feature, you’ll get better traction on slick roads in the 2016 Toyota Sienna. The four-wheel drive option is available on the LE, XLE and Limited versions. The windshield-wiper de-icer adds to the safety of this vehicle when you’re driving in winter weather.

The SE and Limited trims have seven seats. The LE and XLE offer seating for seven or eight people. In certain trims, the second-row seats slide forward significantly, providing more room for passengers to access the third row. In the eight-seat trim styles, the center seat in the second row slides separately from the seats next to it.

Even though the 2016 Sienna is a roomy minivan, the passengers in the back will experience a smooth ride. The standard suspension is gentle and even. Although it’s no 2-door sports car, the 2016 Toyota Sienna has sharp steering and handles well. The sport-tuned suspension that is available in the SE version makes the van feel more connected to the road.

The 2016 Toyota Sienna has more standard airbags than any other minivan in its class. Eight airbags, including roll-sensing side curtain airbags for all rows and a driver's side knee airbag, protect you and your passengers. The side-impact door beams help prevent other automobiles from pushing in the sides of the cabin during a collision.

Some minivans don’t even have much room for groceries behind the rear seats. When the 2016 Sienna’s third row is in place, however, there is still plenty of room for cargo in the back. The third row also stows into the floor, making the rear storage area even bigger. A small space behind the third row lets you stash away valuables that you want to hide from prying eyes.

You don’t ever have to touch the rear liftgate in the 2016 Sienna. If your hands are full when you’re approaching the car, you can open the liftgate using your key fob if you have the SE trim. On some models, you can also close the liftgate from the comfort of the driver’s seat simply by pushing a button.

A backup camera comes on all 2016 Toyota Sienna models. The Limited version offers a backup camera with a panoramic view for enhanced vision when backing up and parallel parking. Guides show you how far away the car is from any obstacles behind it, helping you avoid collisions when you’re driving in reverse.

The materials used in the interior of the 2016 Toyota Sienna feel luxurious. The expansive dashboard makes you feel like you’re piloting your own aircraft, and the white-faced gauges make you feel like a race-car driver.
Buying Tip: To avoid overpaying on a new car, shop prices online first. Get up front pricing before you walk into a dealership. We recommend the following free services; Car Clearance Deals,   Edmunds,   CarsDirect,   NADAguides  &  Motortrend. These free services will offer you the lowest prices and supply you with multiple competing price quotes. You will know the best price before you visit the dealer.

Reasons Not to Buy a 2016 Toyota Sienna – The Cons

1. You can’t store the second-row seats in the floor.

Although the rear seat folds into the floor to provide a flat surface on which you can store cargo in the rear of the vehicle, the second-row seats do not. The second-row seat backs do fold, though, creating some extra room. They must be removed completely and stored somewhere else if you need additional storage space on the floor, however.

The available lounge function on the captain’s chairs in the second row features an ottoman that projects from the front of the seat. The ottoman cannot be used unless the front seats are pushed forward, however. In addition, Toyota recommends that the ottoman feature only be used when the car is stationary.

3. The fuel economy could be better.

The standard V-6 engine provides extra power to the vehicle, but you get fewer miles per gallon when driving the 2016 Toyota Sienna. With the all-wheel drive option, the fuel economy drops even further. However, the 2016 Sienna’s fuel economy is still comparable with most other minivans in its class.

Compared to the 2016 Dodge Grand Caravan, the 2016 Toyota Sienna feels like a limousine. The interior materials are more sumptuous, and the seats are more comfortable. The Sienna handles better than most large minivans, with less sway and more responsive steering. It’s also the only minivan with an option for all-wheel drive, making it one of the most versatile for driving in a variety of conditions. All of the seats are spacious enough to accommodate adults. This is not a feature common in all minivans. Some have such limited room in the third row that it’s not even worth having the extra seating.

The 2016 Toyota Sienna is perhaps the best-driving minivan out there today. It is extremely roomy and can comfortably fit up to eight people. The cargo and seating options are adaptable, making the vehicle as useful for families as it is for individuals. It’s stylish enough to take out for a night with friends, and it’s practical enough to adjust to your ever-changing needs.
2018 Toyota Sienna Trim Level Configurations:

• 2018 Toyota Sienna trim levels. What you get with each trim configuration.