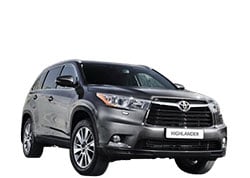 Should You Buy a 2016 Toyota Highlander? Here are the Pros and Cons

A regular player in the market for midsize crossovers, the Highlander from Toyota makes a comeback for 2016 although with relatively few noteworthy upgrades. In fact, the single most significant upgrade is that the Towing Package, which was once optional, is now standard among all the V6 Highlander trims.

Essentially, the lineup for the 2016 Toyota Highlander remains unchanged from what was previously on offer. For the new model, you can still access the base Highlander LE, the midlevel XLE, the LE Plus, the Limited, as well as the Highlander’s flagship Limited Platinum.

The towing package on all trims now come equipped with 200-watt fan coupling, beefed-up alternator, a heavy-duty radiator, and a transmission fluid cooler. Minor upgrades on the 2016 Highlander LE Plus trim level include heated seats.

According to critics, the 2016 Toyota Highlander is an enjoyable vehicle to drive, thanks to its poised handling and smooth ride.

The Highlander, according to reviews has responsive handling for this overall class.

Reviewers have observed that you could easily mistake the 2016 Highlander from Toyota for a Lexus due to its upscale design, quiet ride and top-notch materials.

Inside, the Highlander cabin has been fitted with:

Test drivers have heaped praise on the family-friendly features and straightforward dashboard controls.

Many test drivers have reported that the 2016 Toyota Highlander's front- and 2nd-row seats are easy to step into and roomy.

Reviewers have described storage in the Highlander as terrific. Many have also pointed to the availability of lots of small-item storage cabin compartments.

NHTSA has awarded the 2016 Toyota Highlander its top 5 stars rating for overall crash worthiness. IIHS has given the Highlander its top “Good” score for every test except for the small-overlap frontal offset which is newly instituted (where it has received the 2nd-highest score).

The majority of those buying the 2016 Toyota Highlander end up getting the reliable V6 engine, and for good reason:

The 2016 Highlander has not experienced NHSTA recalls due to safety concerns.
Maker Toyota has covered the vehicle with:

Reasons Not to Buy a 2016 Toyota Highlander – The Cons

Several critics point out that the touchscreen interface of the 2016 Toyota Highlander sometimes will require that you make multiple touches before you have the system doing what you need. Additionally, there are plenty of old-fashioned knobs for common actions like temperature control.

If you're looking forward to some big-time cabin space at the back, be warned as you may get disappointed.

Owners of the 2016 Toyota Highlander have complained about the tepid gas mileage.

It is realistic to compare the 2016 Toyota Highlander with the Nissan Murano and the Honda Pilot?

The 2016 Toyota Highlander, representing the 3rd-year of the current generation model, is still a leading contender when it comes to family-oriented SUV crossover. For those who don't need a huge V8-powered behemoth that can only haul a toy, the Toyota 3-row Highlander comes to the rescue.

The 2016 Highlander offers all-wheel or front-wheel-drive, a choice between 4-cylinder or V6 engines, and is available in 5 distinct trim levels. Each successive level has a longer list of optional features. A long as you don’t first class athletic handling; you're most likely to find this SUV sharp enough. It is the ideal family SUV, giving a respectable performance, a smooth ride, and a charming interior.

• 2018 Toyota Highlander trim levels. What you get with each trim configuration.

Compare Local Dealer Prices
Find the Best Deal
Save Thousands on a 2016 Toyota Highlander! Start Your Own Online Price War