2016 Toyota Sequoia Pros vs Cons. Should You Buy? 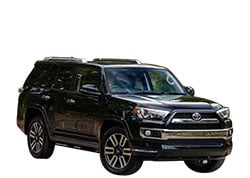 Should You Buy a 2016 Toyota Sequoia? Here are the Pros and Cons

Equipped with a powerful engine, the 2016 Toyota Sequoia is designed to carry up to eight passengers. The full-size SUV’s tough construction and easy-to-use features make it a good option. If needed, drivers can take advantage of the Sequoia’s ability to tow heavy loads. The Sequoia also gets high marks for its ride quality. All trim levels come loaded with plenty of useful features.

To keep buyers satisfied, Toyota offers an upgraded infotainment system for the latest Sequoia. The mid-level Limited trim is now available with blind-spot monitoring. No changes have been made to the SUV's styling.

The 2016 Toyota Sequoia comes standard with a durable V-8 engine. With a total output of 381 horsepower and 401 pound-feet of torque on hand, the SUV always feels muscular. Whether the driver is tackling a steep mountain or cruising along the highway, the SUV pledges to deliver a strong performance. The big bruiser recorded an impressive 0-60 time of 6.8 seconds.

The SUV’s six-speed automatic transmission is among the best. Not only does the transmission shift smoothly, but it also has a reputation for being durable. When pulling a load uphill, the gearbox quickly shifts down to a lower gear. Drivers will definitely like the transmission’s predictability.

From race cars to ATVs, the 2016 Toyota Sequoia has the ability to tow a variety of different things. In fact, the sturdy SUV can pull as much weight as some full-sized pickup trucks. When fitted with the proper equipment, drivers will be able to tow up to 7,400 pounds. A tow/haul model ensures that the transmission is able to manage the additional weight.

A RWD system comes standard. However, Toyota also offers a tough-nosed 4WD system. The multi-mode 4WD system can be turned off when traveling in normal driving conditions. To further enhance traction, Toyota designed the 4WD system with a locking center differential. This means that the SUV will be able to topple muddy trails.

Many test drivers have fallen in love with the SUV’s plush ride. The standard suspension helps keep the big vehicle stable without sacrificing any comfort. Although the 2016 Toyota Sequoia is obviously a large SUV, it does not feel clumsy on the road. The Platinum trim’s adaptive air suspension makes it a great choice for taking cross-country road trips.

Very few people will desire more interior room. The standard bench seat enables eight passengers to tag along. Even the third row seats have the ability to recline. Aside from the SUV’s roomy passenger area, it also offers more than enough storage space. By folding down all of the rear seats, drivers can expand the Sequoia’s cargo capacity to a whopping 120 cubic feet.

Because of the SUV’s running boards, passengers can easily enter and exit the cabin. Featuring a 6.1-inch touch-screen display, the Entune audio system will keep music-lovers satisfied. Families can also take advantage of the large sunroof on beautiful days. Some of the other cool items include a power rear window, sunshades, a rear-view camera, and Connected Navigation.

The Platinum edition is for the drivers who want all the bells and whistles. Adaptive cruise control reduces driver fatigue on long journeys. Meanwhile, heated and ventilated front seats elevate the level of comfort. Heated captain’s chairs replace the standard second-row bench seat. Some of the other goodies include a high-powered JBL sound system, a high-resolution display, and an upgraded gauge cluster.

9) Made for Taking Adventures

The 2016 Toyota Sequoia is made for taking vacations. While some drivers will stick to paved roads, the truck-based SUV is also suitable for traveling off the beaten path. The standard roof rack can carry extra luggage and recreational equipment when needed.

Families will not have to worry about fumbling around with any complicated electronics. All of the features have a straight-forward design. There are a lot of drivers who will appreciate the rotary controls.
Buying Tip: To avoid overpaying on a new car, shop prices online first. Get up front pricing before you walk into a dealership. We recommend the following free services; Car Clearance Deals,   Edmunds,   CarsDirect,   NADAguides  &  Motortrend. These free services will offer you the lowest prices and supply you with multiple competing price quotes. You will know the best price before you visit the dealer.

Reasons Not to Buy a 2016 Toyota Sequoia – The Cons

While very people will complain about the engine’s performance, its fuel economy is a different story. According its EPA fuel economy rating, the 2016 Toyota Sequoia returns 13 mpg in the city and 17 mpg on the highway.

The new Sequoia has an attractive appearance. However, its current exterior design is due for an update.

Unsurprisingly, the 2016 Toyota Sequoia is not the best city vehicle. Some drivers will have a hard time maneuvering it in a busy city. Parking can also be difficult.

Some of the similar vehicles include the Chevrolet Tahoe and the Ford Expedition. In terms of interior room, the 2016 Toyota Sequoia has a tad advantage over the Chevrolet Tahoe. The Tahoe’s third-row seat also requires more effort to fold. In comparison to the Expedition, the Sequoia's V-8 engine produces more horsepower.