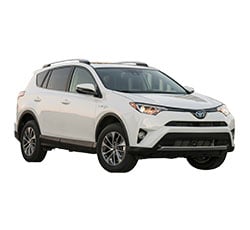 Should You Buy a 2016 Toyota RAV4? Here are the Pros and Cons

For years, the RAV4 has been a popular part of Toyota’s product line. Its compact profile provides ease of handling. Its generous cargo space allows ample room for belongings. The 2016 model offers all the favorite features RAV buyers expect as well as design and technology updates.

The Toyota name sells far more automobiles than any single feature of individual models. Durability, dependability and a reputation for quality still make Toyota one of the world’s favorite automakers.

Toyota vehicles maintain a high resale value too. According to Kelly Blue Book, three out of six vehicles with the best resale value for 2016 are Toyotas.

The 2016 Toyota RAV4 provides plenty of cargo space. The dedicated cargo hold offers 38.4 cubic feet of free space. With the back seats folded down, the cargo area nearly doubles to 73.4 cubic feet.

The 2016 RAV4 holds it own within a competitive class in terms of interior features. It includes a full slate of standard items that new car buyers have come to expect, such as:

Reviewers praise the upfront seating as being comfortable and giving good overall support. The reviews are split on the rear seating.

The fuel efficiency of this compact Toyota SUV compares favorably with the competition. The official MPG is 24 in town and 31 on the freeway. In comparison, the 2016 Honda CR-V gets 26/33 while the Hyundai Tucson boasts 23/31 MPG.

For the first time, Toyota is offering a hybrid RAV4 in 2016. According to a Forbes review, the hybrid 2016 Toyota RAV4 handles similarly to the traditional gas-powered model. It has somewhat less acceleration power and is 300 pounds lighter.

EPA rates its fuel economy at 34 in the city, 31 on the open road. A Motor Trend reviewer reports getting an average of 36.3 MPG in actual driving. This beats the fuel economy of most other hybrids currently on the road, including the Honda CR-V.

Most-wanted safety features of the 2016 RAV4 include:

Many cars are faster and sportier. However, the 2016 RAV4 provides solid and secure handling in inimitable Toyota style.

The base model comes with 4-wheel drive for superior handling in bad weather. With the AWD option, the car delivers dependable traction in the snow. Edmunds praises the 2016 Toyota RAV4’s gravitas on the highway and its smooth handling around turns.

The base model 2016 Toyota RAV4 has a four-cylinder, 2.5-liter engine and an automatic transmission with six speeds. It accelerates from 0-60 mph in an average of 9 seconds, a time similar to that of the CR-V. The Tucson is quicker at 7.9 seconds.

The 2016 RAV has the same antilock brake system that has proven its worth in earlier model years. In testing performed by Edmunds, it stopped within 128 feet from a starting speed of 60 mph. While somewhat longer than average, this braking distance is within the parameters of competing models. For example, Car Sort reports the Honda CR-V’s stopping distance as 123 feet.

Toyota has tweaked the exterior design of the 2016 RAV to distinguish it from earlier models. It has a sleeker, more aerodynamic profile in front. LED lighting gives the car a thoroughly contemporary luster.

The manufacturer describes the redesigned back end as more “athletic,” which means it looks more aggressive than previous models. The 2016 Toyota RAV4 comes in three new color options in additional to last year’s:

This proprietary informational and entertainment suite receives positive reviews from many users. Entune is a compilation of A-list mobile apps and vehicle data services with touchscreen controls.

It offers access to various specialty radio stations such as iHeartRadio. It also connects with Facebook Places, Yelp and more. Information services include weather, stocks, sports and traffic, all available through hands-free Bluetooth technology.
Buying Tip: To avoid overpaying on a new car, shop prices online first. Get up front pricing before you walk into a dealership. We recommend the following free services; Car Clearance Deals, NADAguides, CarsDirect & Motortrend.
These free services will offer you the lowest prices and supply you with multiple competing price quotes. You will know the best price before you visit the dealer.

1. Not Especially Fun to Drive

Unlike sportier cars, this compact SUV sacrifices thrills for comfortable dependability. Although a paddle shifter upgrade may add a sportier panache, it doesn’t make the RAV any peppier. Many reviewers complain that the RAV transmission feels sluggish. They say that the leaders in the class, such as the CR-V and Tucson, offer a more dynamic driving experience.

Some auto commentators find the 2016 Toyota RAV4 to be too ordinary in design and materials. For buyers in the market for standout style, this model probably would not pass muster.

Another complaint about this 2016 model is the lack of comfort in the back seat area. Perhaps due to its abundance of cargo space behind, the RAV4 has less legroom than comparable crossovers. People also say the backseat itself is uncomfortable.

Reviewers point out a couple annoying aspects of the RAV’s Entune system. They mention problems with the touch screen, saying it is often unresponsive. Additionally, the system requires some time-consuming startup steps like creating an account and installing an app on a smart phone.

• 2018 Toyota Rav4 trim levels. What you get with each trim configuration.